A team of Raytheon ATM officials traveled to Iraq in late January, responding to an initial $10.5-million contract the company won to rebuild the air traffic control (ATC) facilities at Baghdad airport. Raytheon anticipates future contracts, which could increase the value to as much as $38.9 million, to supply turnkey ATC systems at additional Iraqi airports, according to our sister publication, Defense Daily. Each airport will be equipped to provide complete ground-to-ground control of air traffic in Iraq. The source of the contract has not been disclosed.

At Baghdad, Raytheon will supply navigation and landing aids, airfield lighting, airport meteorological equipment, and its AutoTrac II air traffic management system. Work at Iraq's capital is scheduled to be completed before the end of this year, according to Janet Kopec, Raytheon's vice president-communications.

The contract options call for the installation of equipment similar to that in Bagdhad for airports in Basra, Mosul, Kirkuk, Najaf, Irbil and Sulaymaniyah. Marlborough, Mass.-based Raytheon also will install primary and secondary radar systems country-wide, as well as provide mainteance training. The Raytheon contract is key to "rebuilding Iraq's infrastructure and to reopening trade and commerce," says Andrew Goldman, vice president of the company's International ATM Systems.

Raytheon, which claims to have equipment controlling one-third of the world, has supplied other Middle Eastern customers, including the United Arab Emirates, Oman, Lebanon and Saudi Arabia. Visit www.raytheon.com.

Clearwater, Fla.-based SkyWay Communications Holding Corp. has purchased a DC-9-15 and will be outfitting it with a wide range of systems, including in-flight entertainment, wireless Internet and e-mail access, telephone service, cabin and cargo area security monitoring cameras, and facial and pattern recognition systems. The company's core product is an up-to-15-megabit/s, air-to-ground connection, which can be used not only to support Internet access, but also to downlink camera output. (The system would work with the former AT&T Claircom tower infrastructure.)

SkyWay says its launch customer, Florida-based Southeast Airlines, wants to put the system on its eight MD-80s. Installation is expected to start in the second quarter of 2004 and be completed in the third quarter. SkyWay maintains that it could install equipment for airlines at no cost. The company expects to generate revenues from advertising and government subsidies for cabin activity monitoring. Flight data and engine/airframe health information also could be downlinked to airlines and engine manufacturers.

Imagery from the cameras on many aircraft can be downlinked to a SkyWay facility manned 24 hours a day, seven days a week. The company says it can archive all downlinked information for 10 years. Its software can detect "abnormal movement" on an aircraft and alert ground personnel to focus on a particular flight. SkyWay's off-the-shelf facial recognition systems could be connected to government databases, a company official adds.

The aircraft itself will serve as a technology demonstrator and test bed. The systems on the DC-9-15, as of early February, were in the supplemental type certificate (STC) approval process. Visit www.skywayaircraftsecurity.com.

Croatia Control Ltd. has selected the Swiss company, Schmid Telecom, to furnish voice communications systems for 52 operator positions in control centers and on a simulator. Schmid will provide its ICS 200/60 system. It is to enter operation in Croatia in August. Visit www.schmid-telecom.ch.

Eclipse Aviation Corp. has signed long-term contracts with a team of electronics suppliers for its Eclipse 500 personal jet aircraft. The suppliers will produce components for an electronic package, dubbed the Avio system, which is to provide "much more than cockpit integration," according to a company release. The Avio system's integral, redundant computers and power distribution unit are designed to monitor and control a range of onboard systems, including engine controls, avionics, the fuel system and even cabin lighting.

The Avio suppliers and the products they will provide include:

The Eclipse is a six-place aircraft designed to provide personal, point-to-point travel for business executives, who probably would fly it, too. Eclipse Aviation says the twin-engine jet will cost less than $1 million. Visit www.eclipseaviation.com.

Eurocontrol officials have been thumping their chests after statistics were released, indicating not only air traffic growth in 41 European countries, but also a decline in traffic flow management delays. Specifically, the countries claimed 2003 was the busiest year on record, with 8.47 million flights, up 2.8 percent from 2002. Sept. 12, 2003, was the busiest single day ever in the European countries, with 28,173 flights, according to Eurocontrol stats. Meanwhile, the average air traffic flow management delay per flight was down by 20 percent in 2003, compared to the previous year. The area that showed most improvement was in average en-route delays per flight, down more than 37 percent.

"The joint investment that has been made in improving the air traffic management system is clearly paying off," says Victor Aguado, Eurocontrol's director general. The agency predicts air traffic growth will continue in Europe in 2004, by about 4.3 percent. Visit www.eurcontrol.int.

BAE Systems will provide multiple subsystems for U.S. Air Force C-17s under a $110-million contract from Boeing. The work will support the service's order for 60 of the heavy-lift transports. BAE will supply fly-by-wire electronic flight control, mission and display processing, loadmaster and cargo delivery, and vehicle management utilities subsystems under the four-year award. Visit www.na.baesystems.com.

Eurocontrol has qualified Comsoft's RAPS II reference product and test tool, which helps determine ATC equipment's conformance with the Asterix format standard for radar data transfer. RAPS II was initially qualified in 1998, but it now takes into account new procedures and quality standards that have been introduced. Visit www.comsoft.de.

Honeywell recently gained a Federal Aviation Administration (FAA) supplemental type certificate (STC) for an avionics package that enables Cessna Citation 500 business jets (serial nos. 001 to 0274) to operate in the domestic reduced vertical separation minimum (DRVSM) airspace. FAA has mandated that, beginning January 20, 2005, all aircraft operating between 29,000 and 41,000 feet must be capable of controlling their altitude, so that air traffic controllers can space traffic at 1,000-foot increments, instead of 2,000-foot spacing. The Honeywell package includes two AM 250 altimeter systems coupled to a KFC 325 flight control system and an EFIS 50 electronic flight instrument system. Honeywell offers the altimeters separately to operators of Citation 500s already equipped with the KFC 325 and EFIS 50. Visit www.honeywell.com.

To secure its shores, Mexico has obtained and refurbished three E-2C Hawkeye aircraft with new mission systems. The aircraft were acquired from the Israeli Air Force and upgraded by Israel Aircraft Industries. Visit www.iai.co.il.

The Federal Aviation Administration has an order and two options for new Bombardier 604 aircraft, to be used in runway and airway calibration and other special missions. The aircraft will join FAA's fleet of six Learjet 60s, used for similar missions. Delivery is expected in November 2004. Visit www.aero.bombardier.com.

China Airlines has signed a letter of intent with Connexion by Boeing to provide Internet connectivity to the carrier's aircraft flying in and out of Taiwan. Initially, the agreement covers the carrier's long-haul fleet, including B747-400s and Airbus A340-300s. Visit www.connexionbyboeing.com. 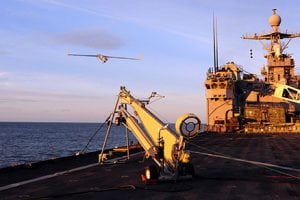