URET CCLDs are to be operational at six additional ARTCCs by mid-2002: in Memphis, Indianapolis, Cleveland, Washington, D.C., Chicago and Atlanta. This represents an initial deployment to evaluate the system’s performance and benefits before full-scale development and installation at the remaining 13 ARTCCs by 2005.

Lockheed Martin ATM developed the URET CCLD system under a $204-million contract awarded in September 1999. URET prototypes, previously developed by the Mitre Center for Advanced Aviation Systems Development (CAASD), have been undergoing field evaluation at the Indianapolis ARTCC since January 1996 and at the Memphis ARTCC since June 1997.

URET CCLD detects and alerts the data, or D-position, air traffic controllers (who assist the radar, or R-position, controllers) to aircraft-to-aircraft conflicts up to 20 minutes in advance. This feature, called "conflict probe," uses the system’s flight plan and track database, which captures data from the ARTCC’s National Airspace System (NAS) host computer and ultimately from URET CCLDs in neighboring control centers. With this information, the system can continuously monitor aircraft conformance to flight plans. The URET CCLD also will give controllers an alert 40 minutes in advance of when an aircraft is predicted to penetrate restricted or prohibited airspace.

As a Free Flight component, URET CCLD can benefit aircraft operators. For example, pilots can plan a more direct route or a change of altitude for favorable winds to save fuel and time. Or they can plot a deviation to safely skirt adverse weather. From the prototype systems in Indianapolis and Memphis, airlines reportedly saved more than $18 million annually.

With the URET CCLD’s "trajectory modeler" feature, the controller, in turn, "can quickly assess the pilot’s requested change to a flight plan to see if there is a conflict with other aircraft," says Sue Corcoran, Lockheed Martin ATM’s vice president-North American programs. To make its calculations, this feature employs weather data, the aircraft’s flight performance characteristics, altitude and speed restrictions, and track data.

The information for URET CCLD flows between the ARTCCs’ host computers and between a center’s host computer and its controller displays. The system includes a local area network (LAN) and a commercial-off-the-shelf (COTS) router connected to the FAA bandwidth manager WAN (wide area network) for interfacility data communication.

The URET CCLD installation involves both the system’s commercially available hardware and more than 600,000 lines of new software code. The software is integrated with the NAS host computer system and display system replacement (DSR) software.

Software installation takes no more than a couple of hours, "but we then must run a series of formal tests to demonstrate to each site that the system is functioning as required," says Corcoran.

By May 2002, all seven ARTCCs are scheduled to have the URET CCLD ready for use. The controllers, who are being trained on the system, will begin its use gradually, according to Corcoran. "They will use the tool on a limited number of sectors and then add sectors as the comfort level increases," she adds. "One of the goals is to show measurable benefits from URET CCLD by the end of 2002."

This operational testing represents build one of the URET CCLD program. Build two will involve the installation of new software, which will include modifications based on user input. In addition to being the launch site for URET CCLD, Kansas City also is the system’s most westerly site.

"Most are eastern or central [U.S.] sites," Corcoran explains, "to establish contiguous sites for maximizing benefits to aircraft flying across center boundaries. Also, the traffic is very dense along this corridor." 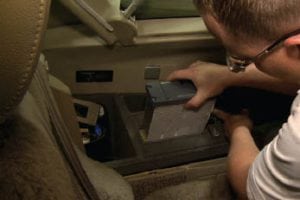