At Federal Express’ (FedEx’s) main hub, in Memphis, Tenn., the cargo carrier’s aircraft line up in workstations for maintenance and inspection. Technicians work diligently, but they don’t scurry about for reference to maintenance manuals or aircraft logs. And their hands are free of clipboards and maintenance logs. In fact, there is no paper in sight. The technicians only make occasional reference to devices conveniently strapped to their waists.

Welcome to the world of wearable computers. It’s a world FedEx entered in 1998, when Senior Vice President Don Barber decided to launch a program that would add efficiency to the express-package carrier’s maintenance operations. For some tasks, the computer processor, keyboard, and screen worn on a technician’s belt may save only a few minutes. But with 662 aircraft to operate and 3.3 million packages (weighing more than 13 tons) demanding overnight delivery each day, a few minutes can add up to significant time and money savings.

FedEx hasn’t yet calculated the savings. However, Russell Young, manager-aircraft maintenance projects, says his company plans to evaluate the return from wearable computers. But he hastens to add that the portable processing "was a strategic purchase and not an ROI [return on investment] decision.

"We know this is where the technology is going," he explains, "and we knew [wearable computers] would save time."

The conference created a buzz of activity, not to mention the occasional individual wondering the exhibition floor, looking a little like "Robocop." With drop-down monocle-like, miniature computer screens worn on their heads and small processor packs with radio transmitters fastened to their waists, these individuals demonstrated the latest in miniaturized technology. One individual walked among conference attendees, taking digital photos that could be viewed virtually instantaneously on a Website, anywhere in the world.

The conference gave Xybernaut a forum to introduce its new MA V wearable computer. It succeeds the MA IV model, which FedEx currently uses. The cargo carrier has purchased 190 units from Xybernaut, and Young says some future deliveries may include MA V or MATC (TC for transferable core) units.

About the size of a thick paperback book, the MA V weighs one pound (0.45 kg). This small package offers 128-megabyte synchronous dynamic, random access memory (SDRAM), expandable to 256 megabytes, and 2 gigabytes (expandable to 5) of removable hard disk drive. Xybernaut customers have a choice of operating software for the MA V: Windows 98, NT or 2000, Unix or Linux. The unit comes with either monocular or binocular, head-up viewing and/or an all-light-readable, touch-screen, flat-panel display, and a ruggedized, 60-key QWERTY mini-keyboard that straps onto a wrist.

The MA V has a built-in sound card, and its accompanying headgear can include an integrated microphone and ear-piece speaker for voice activation and communication. Of course, Xybernaut proposes the MA V for many more applications than in the aviation field, including everything from inventory work in retail stores, to military operations, to use by remote medical teams.

The FedEx technician wears a wide, all-weather belt, designed by the company, on which the MA IV processor is attached to rest on one hip while a touch-screen display rests on the other hip. To send or access data, the technician unstraps the canvas pouch, and the Palm Pilot-size display folds out to a working position. FedEx maintenance technicians still are providing feedback for modifications to accommodate the way they carry or wear the units.

For data exchange, FedEx established a radio frequency (RF) network at Memphis and 11 other locations. By the end of this year, Young says, the company will have these wireless local area networks (LANs) operational at some 40 more sites. FedEx also plans to expand the RF networks’ use by persons, for example, in charge of cargo weight and balance, and container tracking.

The FedEx maintenance technician’s MA IV includes two PCMCIA slots, one of which connects an 11-megabit radio, operating at 2.4 gigahertz, which is the 802.11b standard protocol. The processor contains the Vision graphical user interface (GUI), written in Java. It is a Windows, browser-based program that allows the technician to access several legacy information systems in a single interface, with one password.

Also, through Vision, technicians can access the AirGTi On-Line software, which supplements the GUI to present technical data to the technician, via the browser, contextual to the aircraft in work. In other words, the Vision software automatically passes information about the aircraft and/or discrepency to AirGTi On-Line when selected, eliminating several navigational steps for the maintenance technician.

Indeed, while in or on the airplane, the technician can access all needed, integrated data for an aircraft’s inspection and maintenance: technical data, in-house work cards, maintenance manuals, company manuals, flight information (arrival, departure, etc.), current airworthiness status, and other information. Soon, FedEx wants to establish an air traffic control feed, so technicians also can access on their wearable computers flight delays or early arrivals, to fine tune their time management.

With two-way communications capability, technicians can turn to their wearable computer to transmit parts orders and job reports. They also can update the electronic aircraft maintenance log (EAML), by inputting new discrepancies or pilot reports (Pireps), according to Young. FedEx’s intent is make its maintenance operation totally paperless.

Young summed up the benefits of wearable computers at the Xybernaut conference. They:

Use of wearable computers comes with challenges, however. Several speakers at the Xybernaut conference cited "employee resistance to change" as the No. 1 obstacle to these devices’ acceptance and widespread use. All speakers agreed that input from potential users is critical. In this vein, FedEx surveyed its maintenance technicians in Memphis, Indianapolis and Newark. It found that 16% of those responding thought using a wearable computer would be "easy" and 59% found it to be "acceptable," Young reports. Some technicians resisted the idea.

With the use of wearable computers and an RF local area network, Federal Express is well on its way to achieving a total paperless maintenance operation. To reach its goal, the carrier plans to add still more capabilities. For instance, it intends to incorporate:

Federal Express may be a pioneer in applying wearable computers to aircraft maintenance, but it isn’t alone. For example, as reported in our sister publication Aviation Maintenance (June 2001), Northwest Airlines found these devices to be the answer for better managing, and reducing, its non-routine maintenance. In 1999, Northwest turned to ViA Inc. of Burnsville, Minn., which offered its ViA II system with hand-held display.

Prior to implementing the ViA II, the thousands of non-routine maintenance requests that may accompany an aircraft maintenance check were filed by Northwest technicians in triplicate and entered manually into the airline’s data system. Now, with the ViA II wearable computer and Northwest’s customized software, the airline’s technician can complete these tasks relatively hands-free. Northwest has ViA II PC units available at three of its maintenance facilities. For more on ViA Inc., visit www.via-pc.com. 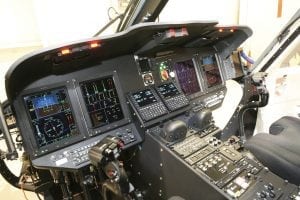