New aircraft and retrofit installations for the near- to mid-term, plus new technologies such as broadband and in-seat power supply should keep the in-flight entertainment market healthy for some time, Frost & Sullivan projects.

In-flight entertainment (IFE) goes back in time further than many people may think. It began on air transport aircraft more than 35 years ago with film projection to the front of the passenger cabin.

Needless to say, IFE has come a long way. And it continues to advance rapidly, both technologically and in terms of its economic potential. But for how long?

Until the past decade, IFE had not changed significantly, apart from the addition of new projection technologies and distributed audio entertainment. However, the distribution of video to the seat and the introduction of in-cabin commercial telephone service have boosted the industry. In addition, the term "in-flight entertainment" today encompasses more than just aircraft cabin electronic systems that "entertain," to in-seat power supply for laptop computers and other personal electronic devices (PEDs) and in-flight telecommunications. Tomorrow’s IFE systems promise access to e-mail and the Internet, as well as to entertainment content delivered via satellite in real-time through broadband networks.

The IFE market has two distinct segments: air transport and business aviation. Manufacturers and vendors competing in the market generally are focused on one segment or the other; few on both, according to the analyst firm Frost & Sullivan.

Regardless of the end user, vendors in the IFE industry have numerous questions concerning the outlook of their markets. Will aircraft production support continued market growth? Will airlines and business-jet owners continue to have the money and interest to install and upgrade IFE systems in their aircraft? How will content and services be delivered to aircraft to maximize usability, reliability and revenue generation? At Frost & Sullivan, the following is what we found.

Since the resurgence of the commercial airline industry in the mid-1990s, the annual profitability margins of major airlines have grown substantially. With higher profits, these airlines have had the income to invest in improving their product and service offerings. Hence, they compete by upgrading their IFE systems.

Similarly, strength in the global economy over the past couple of years has driven the growth of multinational corporations and the wealth of individuals who either need or desire business jets with fine appointments and advanced communications and entertainment technologies.

Technology also has propelled the IFE industry. As interactive in-seat audio/video-on-demand (AVOD) becomes more popular on wide-body aircraft, and as airlines install systems that serve all cabin classes, the revenues from IFE systems will rise accordingly–at least in the near- to mid-term.

However, many IFE vendors are concerned. They worry about rising fuel costs and how this may impact the airlines’ profit margins and the bizjets’ operational expense. And, in the short-term, they also ponder the decline in demand for 400-plus seat aircraft. This decline is due, in part, to the development of longer range narrowbody aircraft and the availability of new widebody models (i.e., A330, A340, and B-777) with smaller seating capacities. The result has been order cancellations from traditional Boeing 747 customers.

Additionally, most of the existing commercial air transport passenger aircraft slated to be equipped with the latest IFE systems will be retrofitted with those systems within the next five years. Thus, in the long-term, the retrofit market is due to begin approaching its saturation point, reducing its overall revenue potential. Long-term, revenues from the aftermarket will come from service contracts and upgrading previously installed systems.

Additionally, growth in fractional ownership programs has driven the demand for business jets. The boost in business jet production coincided with strong economic growth from the mid-1990s to the present. Growth in the world market for business jets peaked sharply in 1997, and in 1998 began a very gradual decline that Frost & Sullivan expects will bottom out in 2003.

Airlines tend to cater their in-flight amenities to business travelers, their most frequent clients. Today’s business travelers often carry laptop computers and PEDs–devices that have batteries with limited lives. So, the demand emerges for electrical power. The solution, power outlets in seats, has existed on some business jets for quite a while, and now it represents a niche market for commercial aircraft, too.

With power for their electronic devices, the next logical desire among business travellers is for access to their e-mail and the Internet. As with the in-seat power systems, these connections are already in use in numerous business jet applications, and within two to three years, they are expected to be commonplace on commercial aircraft, as well. Yet to be determined, however, is a business model that maximizes revenue streams for such services.

As satellite telecommunications in airborne applications become more widely accepted and utilized, costs will come down, driving more common usage and, consequently, revenue growth. The use of broadband telecommunications may be the solution to a major problem that has haunted to the IFE industry: system reliability.

Broadband may also benefit interactive in-seat systems, which have suffered a rocky road. That road arguably began in April 1996 when United Airlines sued GEC-Marconi, claiming that the manufacturer’s interactive in-seat systems delivered to the carrier did not meet the order’s specifications. This ignited other cases over the past few years, including soured deals between Northwest Airlines and Hughes-Avicom (now Rockwell Collins Passenger Systems) and British Airways and B/E Aerospace IFE Group (now Sextant Inflight Systems).

These court cases stunted the interactive system market’s growth. However, most of the bugs affecting these systems have been worked out to the point where mean-time-between-failure (MTBF) rates are above the 90th percentile. These systems now are being flown successfully on a number of airlines.

The introduction of broadband telecommunications technology into the aircraft market may eventually include the delivery of entertainment content that includes movies and television. At the forefront of broadband in-flight services, Connexion by Boeing is anticipating e-mail and Internet services for commercial and business aircraft within two years. This may eventually lead to content services, as evidenced by Cinema Connexion by Boeing’s recent efforts to supply film distribution to theaters.

Combine the past five years of growth (and profitability) in the commercial airline industry with the past 10 years of advancement in information and telecommuniction technologies and you have an IFE industry that has been riding a market-ripening wave, according to Frost & Sullivan. At the same time, consolidation in the IFE industry has allowed competitors to focus more on developing reliable systems that tailor to end-users’ needs.

Recent annual growth rates for revenues generated from the global markets for IFE have been between 15% and 20%. From revenues in 1999 amounting to $1.86 billion, the market grew 18.5% in 2000, to $2.21 billion. Led by a predominant air transport segment that accounts for over 90% of the market, the annual revenue growth rate is expected to peak at 22.8% by 2003. This anticipated growth is dependent upon a peak in the retrofit market and an expected strong second year of widespread use of in-flight Internet, e-mail and content services.

By 2005, the market size is expected to reach just over $5 billion with an annual growth rate of 13.5%. The causes for this expected lower growth rate following 2003 are slower production of commercial and business aircraft, a maturation of the telecommunications and content services sector, and a shrinking retrofit market.

Revenue growth beyond 2003 will be driven by system upgrades, continuing telecommunications and content services, a strong commercial and private air travel industry, and maintenance services. As such, the compound annual growth rate for 1999 through 2005 is expected to be 15.2%.

Mirroring the aerospace industry as a whole, the IFE industry’s competitive environment has been impacted by consolidation over recent years. Yet consolidation of the IFE industry has been unique in that it has simultaneously been wedded to the cockpit avionics industry. For example, Rockwell Collins acquired Hughes-Avicom to form its Passenger Systems division. Sextant Avionique acquired B/E Aerospace’s IFE division to form Sextant Inflight Systems (now Thomson-CSF Sextant IFS).

These new corporate relationships offer a competitive advantage in two ways. First, leading avionics companies provide strong, existing relationships with aircraft manufacturers and airlines. Second, linking the cabin electronics to the cockpit avionics allows airlines to diagnose all of the aircraft electronics prior to landing. Delivered via a satellite communications link from the cockpit, this information will be available to the aircraft maintenance crew when the aircraft arrives at the gate, improving the reliability of the IFE equipment and the turn around time of cabin electronics maintenance.

With all this growth and competition, numerous challenges face the IFE market. To begin with, in October 1998, Airbus announced it was altering its procedures for installing IFE systems on its passenger air transport aircraft by adopting a new policy of seller furnished equipment (SFE).

Under this SFE program, Airbus hopes to streamline the engineering, integration and assembly process by offering certain predefined IFE options on all its aircraft models. Such systems need to meet certain specifications to be listed as an option. Aircraft purchasers will then choose their IFE options from a catalog.

Boeing has since begun a similar program for its commercial and business jet programs. So, companies included in Airbus’ and Boeing’s order catalogs become the winners; those not included are losers.

Product and service quality will largely determine the winners, since reliability has become a key issue for IFE end-users. Malfunctioning IFE equipment can be a public relations nightmare for airlines, especially since they covet customer loyalty.

Upgradability also will be a determining factor, because IFE technologies are advancing rapidly. For example, an airline acquiring a new IFE system may want to test a system’s basic operation in a distributed format first, then just "flip a switch" to achieve an interactive capability.

Overall, the global markets for IFE offers a rosy outlook that is dependent upon a strong airline industry and continued aircraft production. The big question today revolves around the potential for growth in the market for in-flight Internet and e-mail services.

Connexion by Boeing asserts that the market for in-flight broadband services will draw some $39 billion by 2009–which bodes well for the IFE industry.

Numerous IFE and telecommunications companies have entered the scramble to provide airborne Internet and e-mail services. A few examples:

As this list shows, much of the technological innovation for in-flight services is being developed by smaller companies. However, according to Joe Patti, director of marketing for Thomson-CSF Sextant Inflight Systems, "recent consolidation of the IFE industry dictates that for such companies to succeed, they need to partner with major players in the market." 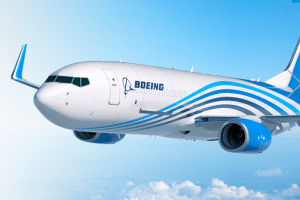 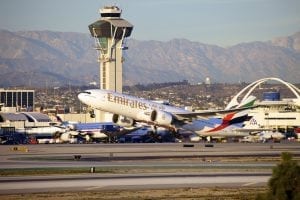 Test Cards for the Airbus 380