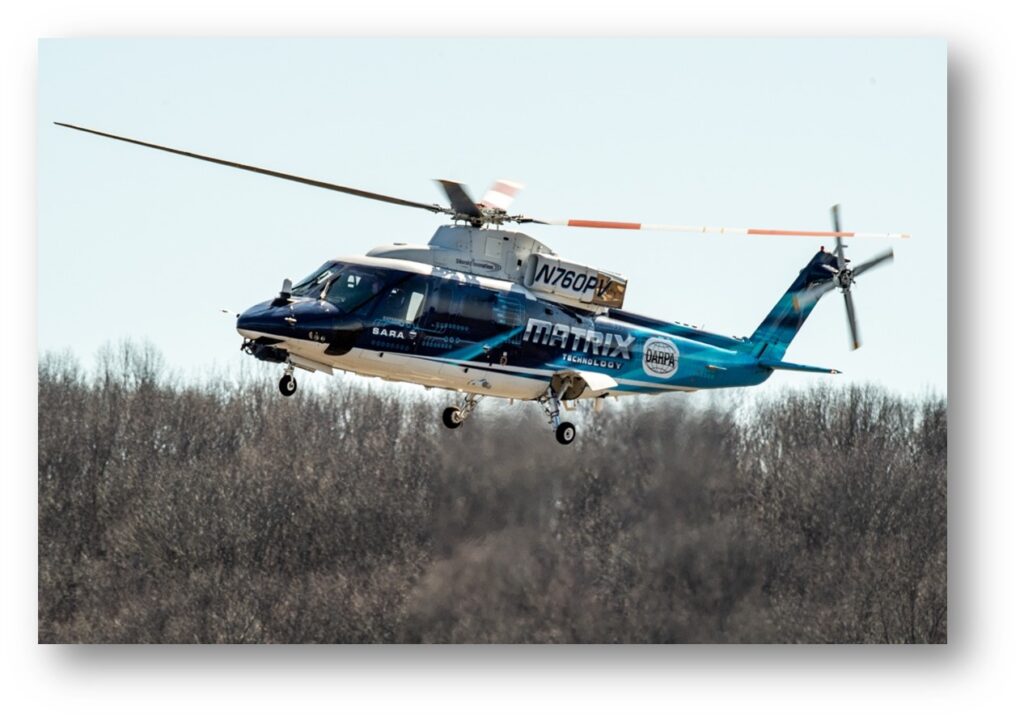 Pilots and researchers from NASA began conducting research flights with the Sikorsky Autonomy Research Aircraft, or SARA, in March. The system uses Sikorsky’s MATRIX Technology that is designed to enable operators to autonomously fly any aircraft, or to fly an aircraft as an optionally piloted vehicle.  The researchers and pilots performing these flight tests are part of NASA’s Integration of Automated Systems (IAS) effort within the Advanced Air Mobility National Campaign program. NASA’s team has now started a new series of flight test campaigns in the past couple of weeks to continue exploring autonomous technologies in partnership with Sikorsky and the U.S. Defense Advanced Research Projects Agency (DARPA).

The new test flights involve determining how well the SARA platform can interpret a flight path’s four-dimensional trajectories into primitive commands and then follow those commands. “The pilots were reviewing the flight profiles and approving them for execution,” explained Dr. Adam J. Yingling, IAS Technical Lead at NASA, in an interview with Avionics International. The use of 4D trajectories adds the fourth element of time to the three components historically used to calculate an aircraft's trajectory (latitude, longitude, altitude).

A key component of research for advanced air mobility (AAM) is the pilot interface. The IAS flight tests are evaluating three different tablets for pilots to use, Dr. Yingling shared. “We looked at a Getac F110, a ruggedized computer tablet format; we looked at a Samsung S7; and we’re also looking at iPads,” he said. He added that the tablets have worked very well so far and exceeded his expectations in terms of performance.

It’s important for the pilot interface to make it easy for the operator to select options while in flight, which can include a lot of movement and changes in lighting. That all needs to be factored in to the interface, and it needs to be easy for pilots to interpret any information that is displayed, said Dr. Yingling.

NASA’s IAS team is working on data analysis to quantify how successfully the aircraft was able to follow the software. The first week of testing, which took place at the end of August into early September, also involved testing the effects of different atmospheric conditions to evaluate how sensitive the algorithm is to certain external factors. “The aircraft has its own physical limitations for things like right-angle turns, but we anticipated that, and the aircraft did a good job following the commands,” he remarked.

Dr. Yingling explained that Sikorsky offers significant expertise in autonomous technologies, such as the MATRIX Technology. However, he noted, there won’t be one single type of technology that can create the autonomy the AAM industry will need. “We’re going to have to stack the algorithms to work well together,” he said. “Some of the automations are all about flying safely. Some are about communicating with external services, with other aircraft, with air traffic control, and all of these need to be brought together. We have to figure out how to stitch them together so that they work in concert.”

NASA, Sikorsky, and DARPA will continue their partnership to explore different requirements for enabling AAM. One capability that will be necessary is machine-to-machine communications for autonomous aircraft flying in a dense airspace. Future flight tests will involve scenarios where the automation has to sense and avoid multiple aircraft.

“We’re envisioning a future that has a very dense airspace where typical communications through air traffic control would get congested,” Dr. Yingling shared. “With our scenarios, we’re going to be simulating very dense air traffic.”

Some of NASA’s commercial partners are also involved in the U.S. Air Force’s Agility Prime program, like electric vertical take-off and landing (eVTOL) aircraft developer Joby Aviation. NASA and the Agility Prime team have both collaborated with Joby to develop AAM technologies.

NASA’s IAS efforts include evaluating requirements for the design of high-density vertiports. eVTOL aircraft will have different flight profiles for take-offs and landings at vertiports, and it’s important to consider the needs of these aircraft in designing vertiports to enable high-density operations, according to Dr. Yingling.

He added that they will use the SARA platform, which has a large flight envelope, as a surrogate for eVTOL aircraft to test out various flight profiles and determine design requirements for vertiport facilities.