Drone manufacturers have started to design aircraft for very specific applications, believes Ken Stewart, CEO of NUAIR (Northeast UAS Airspace Integration Research Alliance, Inc.). Government agencies and departments are not usually looking for just one type of drone to perform a range of operations. They are more likely to want a fleet of drones, each tailored to a specific function or mission.

Stewart sees electric vertical take-off and landing (eVTOL) fixed-wing drones as perhaps the most valuable configuration in the industry. “Those give the ability to hover, land, and take off vertically like a helicopter, but they give endurance where you can fly for a very long period of time,” he told Avionics International. The challenge with electric drones, he noted, is the trade-off between batteries (and endurance) and weight.

An advantage of drones in a quadcopter or octocopter configuration is that they can perform very precise measurements. This is a more difficult or impossible task for conventional take-off and landing aircraft to perform, according to Stewart.

The drones on display included a variety of sizes, configurations, capabilities, payloads, and use cases. Several platforms prioritize quiet operations, an especially valuable feature for applications in law enforcement as well as military. Some of the aircraft are designed with high levels of autonomy or are built to operate even in extreme weather conditions.

Ascent AeroSystems, one of the companies participating in the UAS Public Safety Summit, designs and manufactures coaxial UAVs for defense, public safety, and industrial applications. Ascent AeroSystems flew its Spirit platform during the summit for a live demonstration of the aircraft’s performance and low audio signature. The Spirit, along with Ascent AeroSystems’s other platforms, has one of the more unique configurations in the industry.

The Spirit platform is entirely modular, according to Bobby Sakaki, Sr. Product Manager at Ascent AeroSystems. The coaxial design uses two counter-rotating props that allow for more efficient flight. “Maximum payload capacity is about 6.5 pounds,” Sakaki said, noting that it can fly for 30 to 55 minutes depending on the payload. In addition to its modular architecture, the hardware itself is also modular, he added.

Ascent AeroSystems’s Spirit drone can fly in hail, sleet, snow, and winds over 40 miles an hour. Sakaki remarked that the Spirit is the most ruggedized platform in its class. 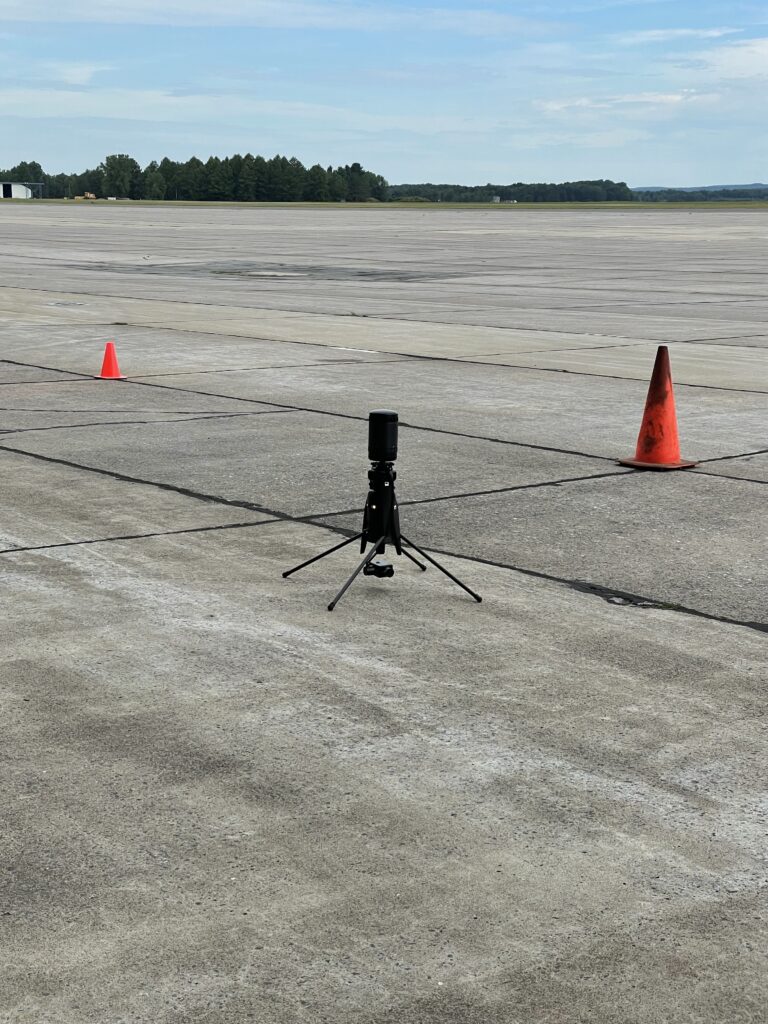 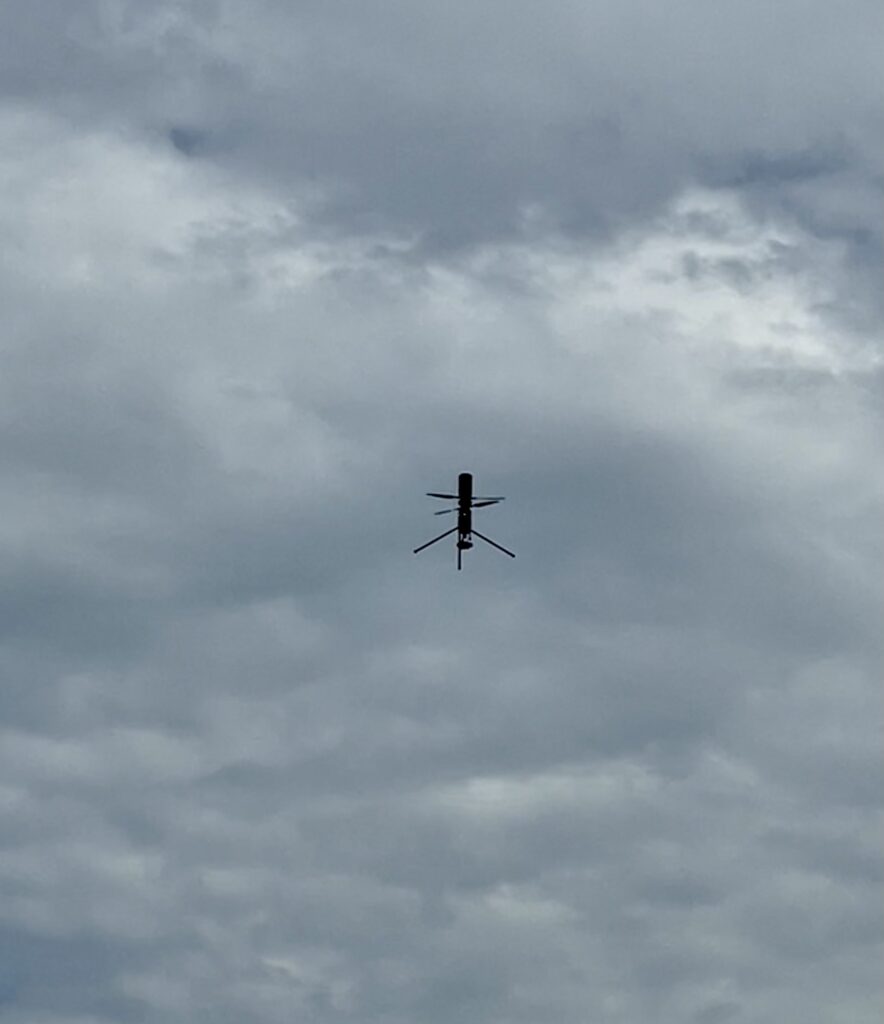 The company has also developed a larger platform called the NX30, unveiled in April and launching later this year. The NX30 is tailored for material transport operations. “It’s built for heavy lift and endurance, and can carry a payload of 15 pounds,” Katie Glennon, Marketing Manager, told Avionics. “Right now it’s outperforming any of the delivery drones that are currently on the market,” she added.

Ascent AeroSystems’s team has also been working on a smaller and quieter platform that was originally developed with military applications in mind. “We realized law enforcement would like to use something they could carry on them all the time for tactical applications,” Ascent AeroSystems's Sakaki explained. He described the drone as an ultralight, affordable ISR platform that can be used for overwatch. This smaller platform will have a flight time of over 30 minutes, and it could be available to customers by the end of 2022.

Skydio is another manufacturer that exhibited and demonstrated the capabilities of their drone platform at the  Summit. Deepu John, Solutions Engineer, explained during the demonstration that Skydio’s drone avoids obstacles with full autonomy while capturing necessary data, even in complex environments.

John previously worked on the Technical Assistance Response Unit for the New York City Police Department (NYPD) before joining Skydio. He began developing the NYPD drone program that launched in 2019 and observed firsthand the challenges that come with piloting a manual drone in a complex urban setting or tactical scenario.

Skydio’s drones use artificial intelligence to create a three-dimensional model of its surroundings in real time and fly autonomously. The hardware on the aircraft includes the NVIDIA TX2, an AI computing device, and six 4K navigation cameras to enable 360-degree obstacle avoidance. 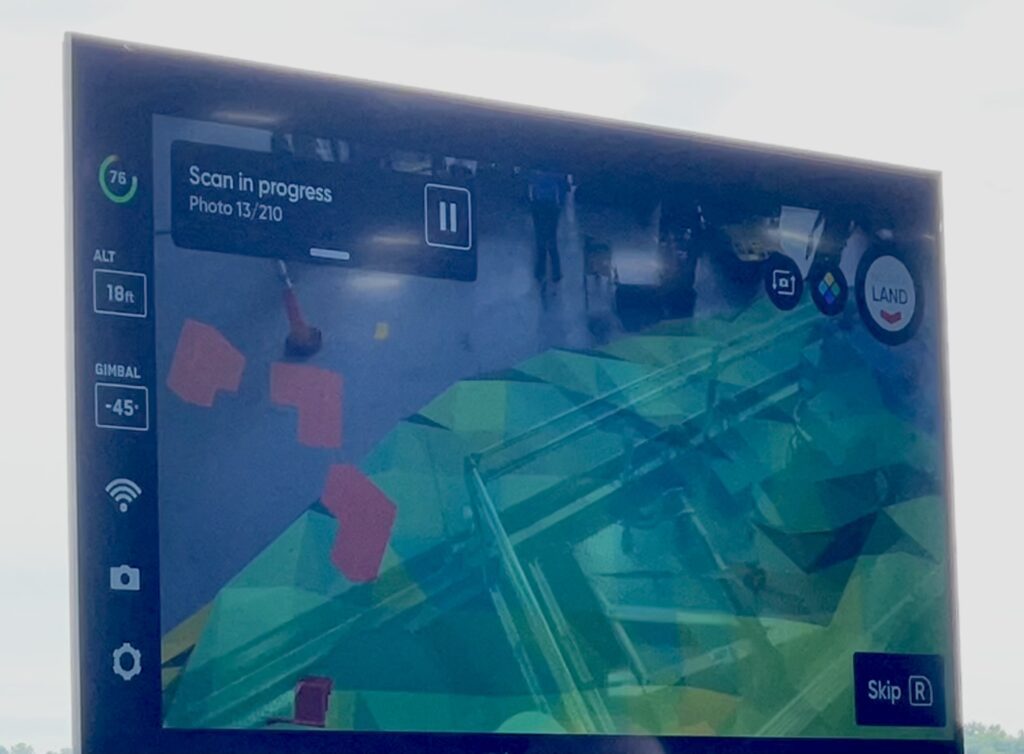 ”This takes all the cognitive load off of the pilot while they’re flying,” said Skydio’s Melanie Donaldson, Enterprise Account Manager – SLED, talking about their autonomous platform. “The pilot can actually focus on the mission and have full confidence that the drone is not going to crash.”

BRINC is a new company, launched in 2021, offering a lightweight drone ideal for use by first responders. BRINC’s team flew its LEMUR S drone into a building and throughout multiple rooms during a live demonstration, utilizing LiDAR-based pilot assistance that simplifies operation of the drone.

The LEMUR S platform is equipped with a two-way communication system including a speaker on the underside of the drone and two microphones on the front. It can fly indoors and it is designed to enter dangerous situations and ensure that it is safe before first responders or law enforcement enter the building. 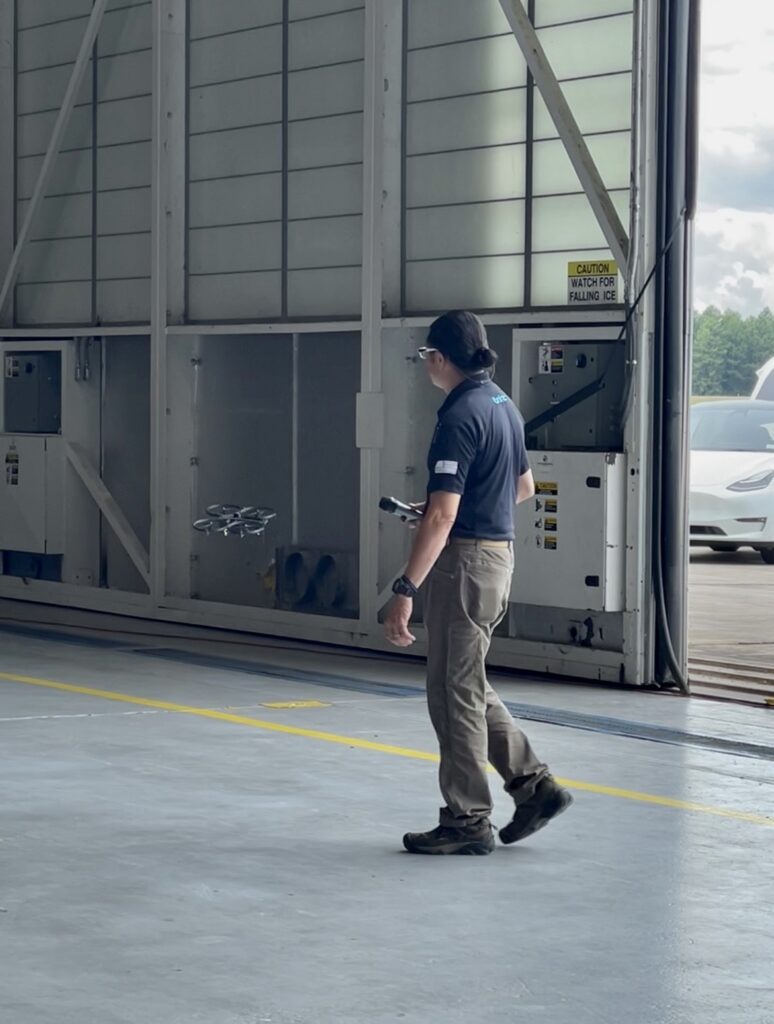 The BRINC operator flying the drone had it crash into a wall to demonstrate that it can continue flying normally after a collision. Pictured above is the LEMUR S drone in midair after colliding with the wall. (Photo: Jessica Reed)

“We offer a care plan that covers everything—you can break it, you can crash it,” shared one of the representatives from BRINC. “Our goal is to put the new guys on it and get them trained up rather than putting them on a more expensive and sensitive drone. 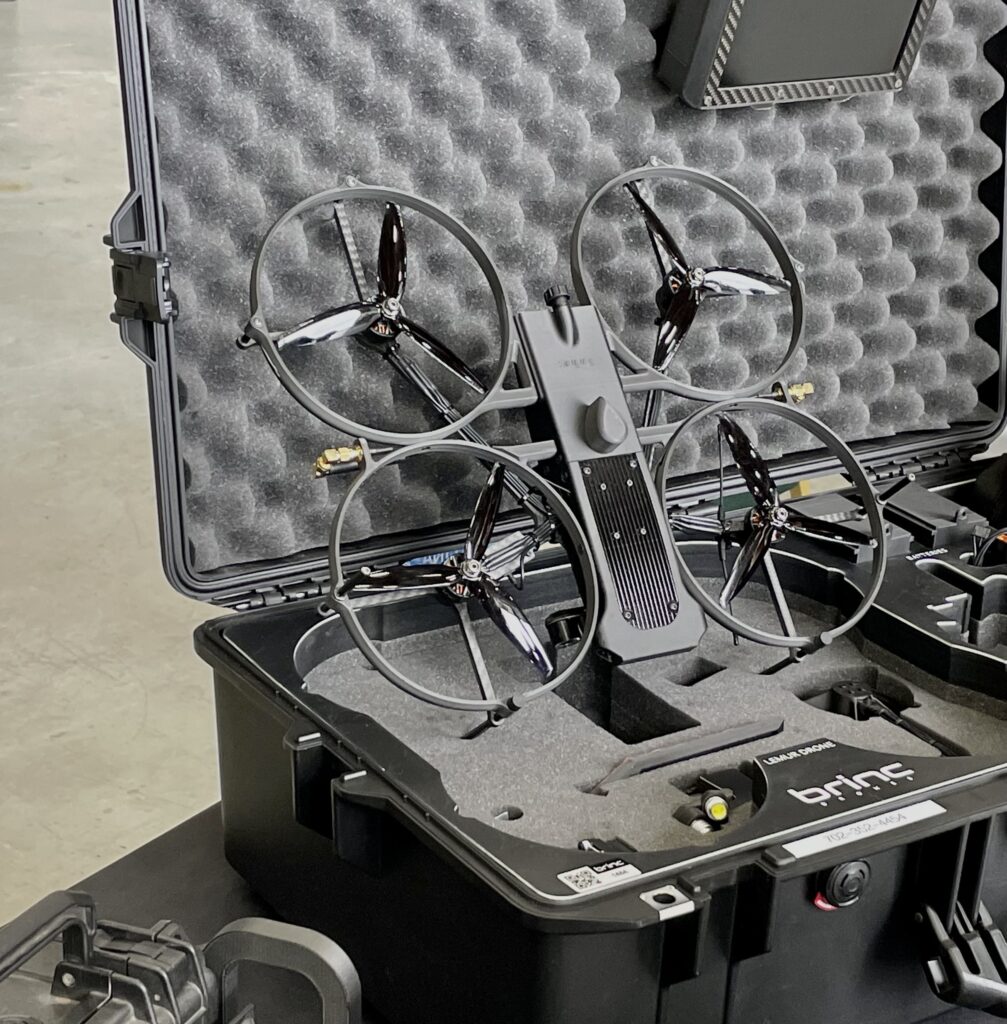 The LEMUR S developed by BRINC has a 31-minute flight time and the battery charges to 90% in 45 minutes. Its maximum speed is 50 mph, and it weighs less than 2.5 pounds. (Photo: Jessica Reed)

Another lightweight drone featured at the UAS Public Safety Summit was senseFly’s 3.5-pound eBee TAC. The UAV can operate in disconnected environments to provide a tactical mapping solution. Its eMotion flight planning software enables offline flight planning and 3D flight planning. And the mission-directed sensor suite allows the operator to collect data for immediate use via the SD card. 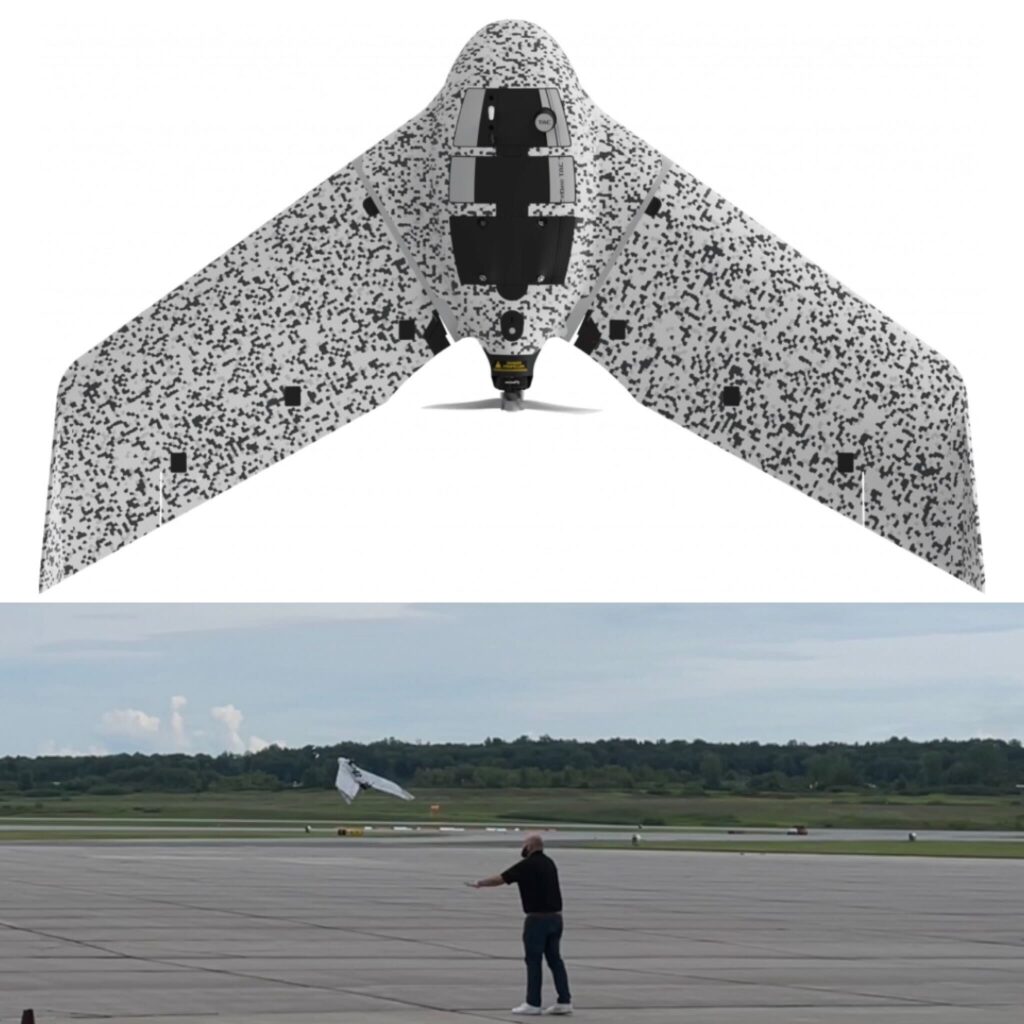 Pictured above is the eBee TAC drone, and a photo of Gary Licquia of senseFly launching the drone into flight. The eBee TAC had one of the lowest operating noise levels of all UAVs that performed flights during the summit. (Top photo: senseFly)

Gary Licquia of senseFly remarked during the flight demonstration of the eBee TAC, “High-accuracy mapping is what we do best.”

The drone launches by hand and can perform two types of landings depending on wind conditions and available space. Some of the applications for the eBee TAC are VR simulation, map annotation and updating, surveying, and estimating line of sight.

Licquia explained, “This is meant to be the Swiss army knife. It’s utilitarian, easy to use, and simple. It just works when you need it to.”

The company Inspired Flight designs and manufactures UAVs like the IF750, tailored for applications such as physical asset inspections and geospatial applications like aerial surveying. Their drones are also ideal for public safety applications including emergency response, search and rescue, and border patrol. 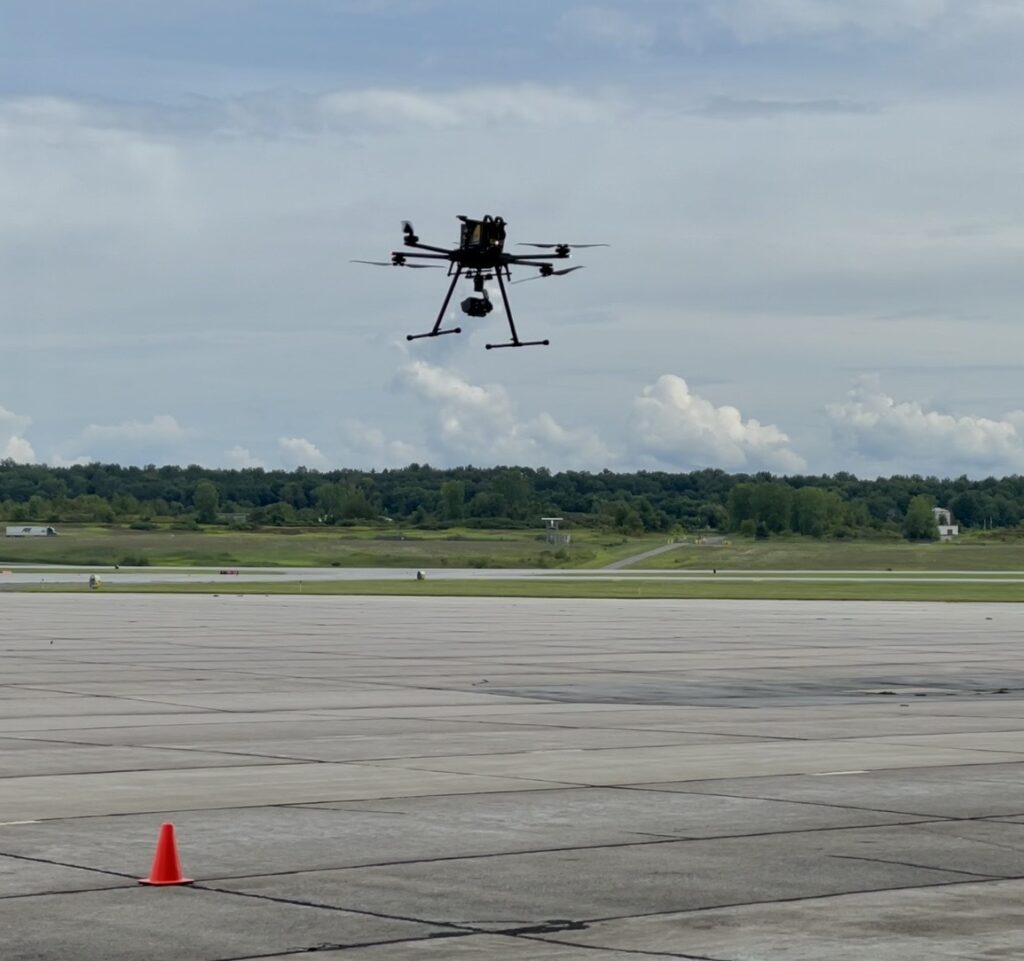 Inspired Flight recently launched a new model, the IF1200A, which it describes as an “industrial workhorse” ideal for high-value data collection. It can fly for up to 43 minutes and has a maximum payload capacity of 19.1 pounds.

“The smaller one, the quadcopter, has a payload of about 4 pounds,” according to Dale Crowner of Inspired Flight. “We are an integrator as well, so we can integrate any type of payload you’re looking for, like cameras or LiDAR,” he told Avionics. 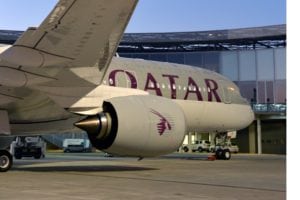