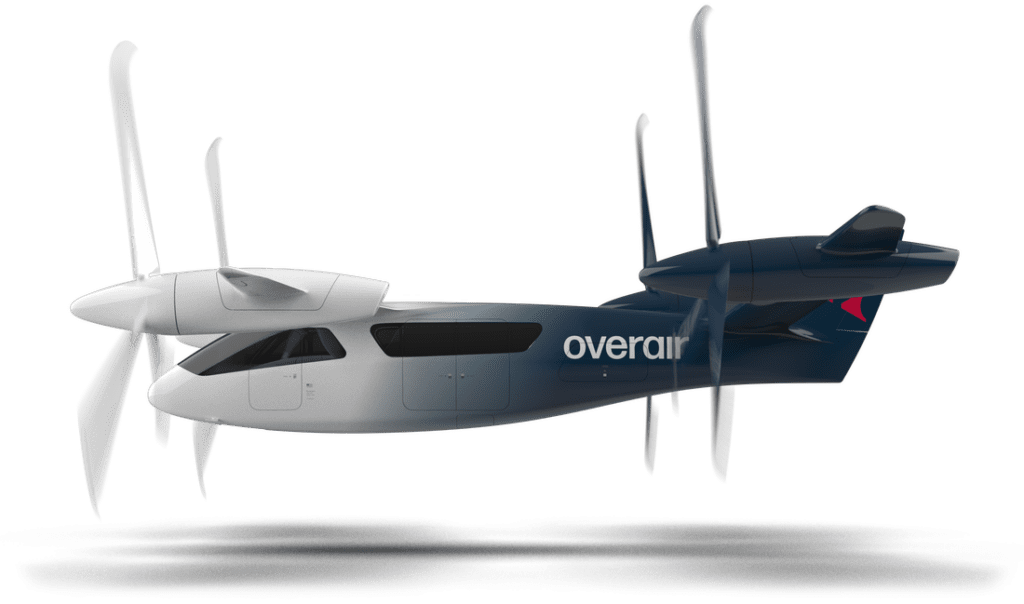 Overair announced this week that it has received $145 million in funding from Hanwha to continue development of its Butterfly eVTOL aircraft. (Photo courtesy of Overair)

Overair, the Santa Ana, California-based electric vertical take-off and landing (eVTOL) startup, just announced that it is receiving $145 million in funding for continued eVTOL development. The funding comes from the aerospace division of Korean conglomerate Hanwha Systems. Overair plans to fly a prototype of its eVTOL, called Butterfly, next year.

Overair originally began as a spinoff of Karem Aircraft in 2018. Aronoff explained, “When Uber started populating this concept of urban air mobility [UAM] using electric VTOL aircraft with batteries that aren’t that great in terms of energy density, the efficient VTOL propulsion IP happened to be a great fit.”

The company has taken the IP surrounding VTOL propulsion that it owns to work towards its objective of operating aerial ridesharing services in densely populated urban areas. The company first revealed the design of Butterfly last August, sharing that the vehicle would employ a vectored thrust configuration to enhance efficiency in flight.

Overair’s commercial strategy is to be a fast follower, said Aronoff. He acknowledged that Butterfly will not be the first eVTOL aircraft to achieve certification. Their team instead focuses on building a capable aircraft designed for a long-term market that will take the most efficient path to certification. Part of the reasoning for this strategy is the company's belief that all of the necessary infrastructure and airspace management will not immediately be ready when the other eVTOL developers receive certification.

The team is currently wrapping up propulsion testing, which commenced in January, evaluating the propulsion system’s performance at flight speeds—both in vertical and forward flight mode. The resulting data is pushed to Overair’s engineers in Santa Ana as they continue development.

“We are now shifting gears to integrating our prototype, which will be flying mid- to late next year. Part of being on the most efficient path to certification is building a prototype at the point in time in the development program that allows the engineers to get the most out of it,” he explained.

“The utilization of aircraft is really driven by performance metrics that people aren’t focused on yet,” Aronoff commented. The design of the Butterfly eVTOL is unique—in particular, the rotors on the aircraft are quite large. This offers Overair significant power margins, even with weak battery cells, to enable all-weather operations. The larger rotors spin more slowly and have a lower disc loading, he added, and they have a low noise profile.

The team at Overair expects their aircraft to be the most capable eVTOL for less-than-ideal environmental conditions. “When it’s not nice and sunny outside, are you going to be able to make your flight with the eVTOL when you planned your schedule around the 15 minutes it takes?” asked Aronoff.

In addition to integrating their prototype, Overair is focusing on downselecting suppliers for their eVTOL’s major aircraft systems like the fly-by-wire system, flight control computers, and other avionics, Aronoff stated. “Hanwha Aerospace will be developing our prototype battery packs and electric motors,” he added. Hanwha offers Overair more than just the $145 million in funding. The conglomerate is considered a global leader in ancillary UAM services, Aronoff said, such as communications, connected vehicle, and ground infrastructure systems.

Having Hanwha as a strategic partner has enabled Overair to focus on the engineering and technical development side of the business as well as building out the Overair facilities. The headquarters are located in Santa Ana, California, and they have a flight test facility complex in Victorville.

Overair has also been working in collaboration with Bristow Group, a global provider of sustainable vertical flight solutions, since the two companies announced the signing of a Memorandum of Understanding (MOU) last December. In addition to contributing to development of a framework for growing operations, Bristow placed a pre-order for up to 50 Butterfly eVTOL aircraft.

According to Aronoff, the team’s main technical achievement so far has been the full-scale propulsion testbed. Because the rotors are so large—the diameter measures 20 feet wide—the testbed is too big to test in wind tunnels. Instead, Aronoff shared, they are testing it out in the desert at their flight test facility. This is “extremely useful to validate all of our modeling, thrust metrics, sound metrics, everything.”

The company has previously stated that it expects to achieve certification in 2025 and launch commercial services in 2026. Aronoff confirmed that their timeline is in the mid-2020s, although there has been a lot of recent uncertainty around the FAA’s exact process for certification, he noted. However, the FAA “has been very outspoken to say that it will not delay the timeline” for eVTOL certification.