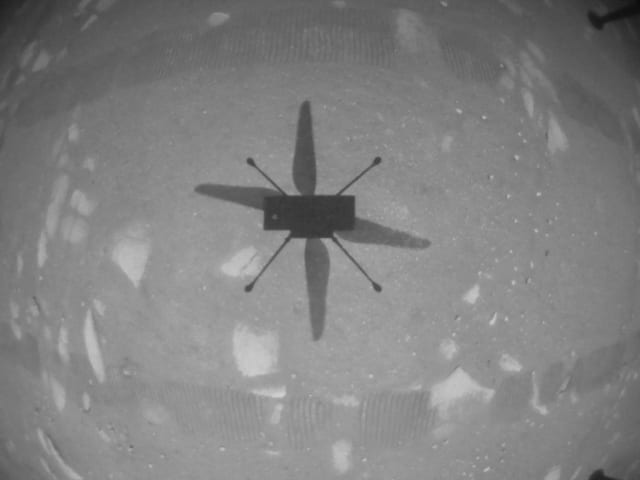 The Mars Ingenuity helicopter completed the first flight on Mars. This photo was taken by Ingenuity and shows the ground view as it is flying. (JPL)

NASA’s Ingenuity Mars helicopter made history on April 19 completing the first powered flight on Mars, according to an announcement from the Jet Propulsion Laboratory (JPL) who confirmed the flight at 6:46 a.m. EDT today.

The flight took place at 3:34 am EDT, which is 12:33 Mars time, and was flown completely autonomously. The data resulting from the flight was transferred back to the JPL through the Perseverance rover, according to NASA.

“Ingenuity was a technology demonstrator and experimental mission but its success is truly remarkable and it gives us this new capability,” acting NASA Administrator Steve Jurczyk said during a briefing on April 19. "I believe…that we should be doing these types of technology demonstrations on all our science missions to take advantage of the ability to prove out new technologies and capabilities that will then feed forward to even more ambitious and productive missions in the future.” 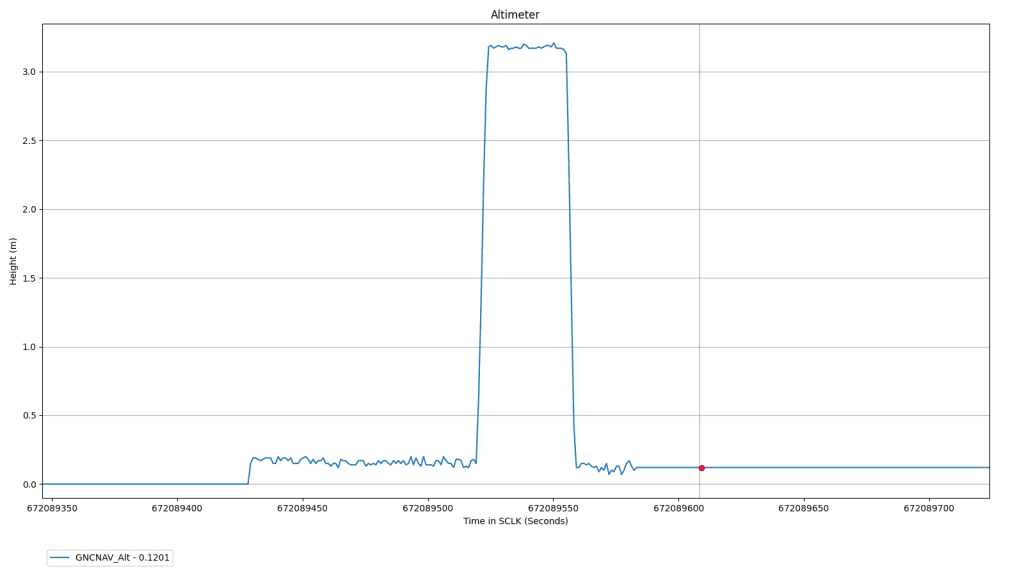 This altimeter chart shows data from the first flight of NASA’s Ingenuity Mars Helicopter, which occurred on April 19, 2021. (JPL)

“This flight was all about proving that it is possible to fly on Mars,” Grip said. “So to that end, what we had instructed Ingenuity to do was to climb to an altitude of three meters, hover there for a little bit, about five seconds, then make a turn of about 96 degrees, hover for another 20 seconds, and then go to land again in the same place that it took off from. That's what we told engineering to do and it did exactly that. And it did it just perfectly.”

Grip said the flight is considered successful from the data JPL has received so far.

“From everything we've seen so far, it was a flawless flight,” Grip said. “It was a gentle takeoff, at altitude it's gets pushed around a little bit by the winds but it really just maintained station very well, and it stuck the landing right in a place where it was supposed to go.”

Ingenuity is only four pounds, and its blade span is just under four feet. The small helicopter faced many challenges to get to its first flight including Mars’ unique atmosphere.

“When things work, it looks easy,” MiMi Aung, Ingenuity Mars Helicopter project manager at JPL, said during the briefing. “I would like to take this opportunity to remind how difficult it is to fly a rotorcraft at Mars. First and foremost, because the atmosphere there is so thin, right, about one percent compared to that at Earth. That's like on Earth being at elevation three times the height of the Himalayas. So, the air is very thin and Ingenuity had to be really light, small and has to be able to fly in the atmosphere and survive on its own. It did all of that under four pounds.”

Aung said Ingenuity has met all three of NASA’s agency-level objectives by showing powered flight is possible on Mars, actually flying on Mars, and getting data for future generations of Mars helicopters.

“Mars helicopter Ingenuity technology demonstration project has three goals in alignment with NASA's agency-level objectives,” Aung said. “The first is to show on Earth that it is possible to fly power controlled flight at Mars. We did that before we were launched. The second goal was to actually fly on Mars, we have done it…The third goal is to get data back that will inform engineers that are designing future generations of Mars helicopters, and we have done that too.”

The blades of the helicopter are blurred because the video has a 10-millisecond exposure time which equals about one-half rotation of the blade, Maki said. So far, they have been able to receive about 2,000 image frames from the rover.

“I can tell you from firsthand experience that that was harder than it looks,” Maki said. “In fact, I think I speak for our entire imaging team that we're kind of relieved that we caught it in flight. We had practiced this three or four times before and this is the first time that we were able to nail it…You have two different spacecraft. They both have roughly the same time, but they operate differently, and so characterizing how the heli operates when we tell it to go, compared to how the rover does its thing is actually tricky.”

Now that Ingenuity has taken its first flight, the JPL team is planning up to four more flights in the coming weeks. The technology demonstrator has two weeks left in its planned month of experimentation.

“So, beyond this first flight, over the next coming days we have up to four flights planned and increasingly difficult flights, challenging flights, and we are going to continually push all the way to the limit of this rotorcraft, we really want to push the rotorcraft flights to the limit and really learn and get information back from that,” Aung said.

“Ingenuity itself is extremely healthy at this point,” Balaram said during the briefing. “In fact, she's even healthier than she was before this. She shook off some of her dust that I've been covering her solar panels and is in fact, producing even more solar energy than before. The batteries are looking good. The communication system is fantastic. The landing gear appears to work well. All the silver mechanisms and motors are doing great. The computers and avionics behave flawlessly. So all in all, it's in a perfect state. And I'm just really excited to see what else she can teach us over the next few weeks as we explore aerial mobility on Mars.”

The next flights could test things like speed, distance, or how the helicopter reacts to wind. Aung said the JPL team expects to test the helicopter to meet its limits. This information will be important to allow the JPL team to find unknowns that they weren’t able to model.

“It's also important and probably supportive of that plan to actually deal with this, like a tech demo, and we really want to be sure that when everything is said and done we know the full scope of what's possible with that type of flying machine,” Grip, Ingenuity's chief pilot, said. “And so for us, that's really critical…The month of Ingenuity is very much in the spirit of a tech demo. That's exactly what you would want to do, right, kind of to make sure that in fact, we're putting a pedal down and are going for it.”

An added element of additional flights could be audio. This capability was available during the first flight however there was a concern that there could have been EMI interference between the microphone and the helicopter flying, Aung said.

“There is a plan to record the sound,” Maki said. “We didn't want to put that into the first observation or the first try, because it was complicated enough just trying to get the video to work. So, we're going to be putting that in an upcoming plan. I'm not sure if it'll be the second flight, but it's certainly one of our later flights.”

Right now NASA and JPL are working to gather and analyze all the data from Ingenuity’s first flight and that will inform the next flight which could be as soon as Thursday, Grip said. 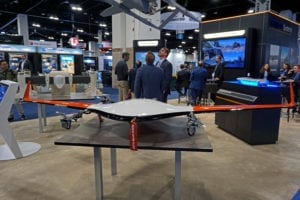 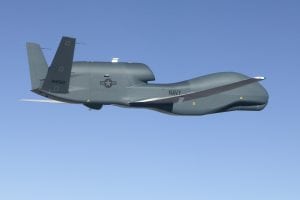