Some of the aerospace industry’s most advanced groundbreaking future technologies and concepts are being researched and developed within academic labs and campuses at hundreds of universities in the U.S. right now.

A significant number of programs are performing never-seen-before operations using drones for everything from California Polytechnic State University’s initiative for identifying sharks that present risk to beachgoers and Colorado University Boulder’s project TORUS, a two-year partnership between CU Boulder and several other major universities and national research groups to use drones that will actively collect data about how and why tornadoes form.

Florida-based Embry Riddle Aeronautical University, one of the most well-known schools for developing future aerospace leaders in North America, has a partnership with Verizon to use assist marine biologists in identifying the best unmanned aircraft system to use to study sea animals without disturbing them.

“We are partners with the Verizon company called Skyward. They provide drone management software along with a lot of other capabilities like live streaming and autonomous route planning,” Embry-Riddle Assistant Professor of Aeronautics David Thirtyacre told Aviation Today. “We are working on the permits and location for the final phase of the research. There are drones involved in a lot of research, but due to the lack of data on the noise made by the drones, it is very difficult to procure permits. That's one of the things we're trying to fix: Get the permit issuing agencies the data they need to allow more widespread use of drones.” 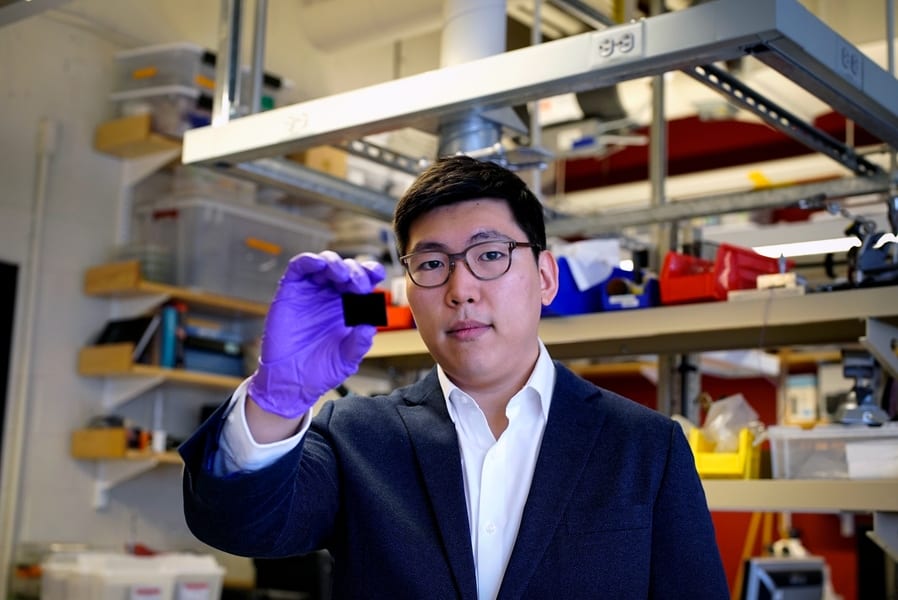 Engineers at MIT have developed a new method that could drastically reduce the amount of energy, infrastructure, money, and time required to produce composites used for aircraft parts and aerostructures.

Through a research project – partially supported by Airbus, ANSYS, Embraer, Lockheed Martin, Saab AB, Saertex, and MIT’s Nano-Engineered Composite aerospace Structures (NECST) Consortium – a team of researchers in January published a paper in the Journal of Advanced Materials Interfaces explaining how the application of electric current to carbon nanotube (CNT) film can produce the same type of composites being used on some of the newest in-service commercial airliners today at fraction of the cost.

According to their paper, the composite materials typically used to produce aircraft wings and fuselages are traditionally produced by taking multiple polymer layers and blasting them with temperatures as high as 750 degrees Fahrenheit inside of large ovens the size of four-story buildings in some cases.

Most aircraft composites are manufactured from multiple sheets of composite materials, stacking them, and molding them into the desired configuration of a fuselage or other parts prior to curing the layers and fusing them together into an aerodynamic shell inside of an industry-scale oven. 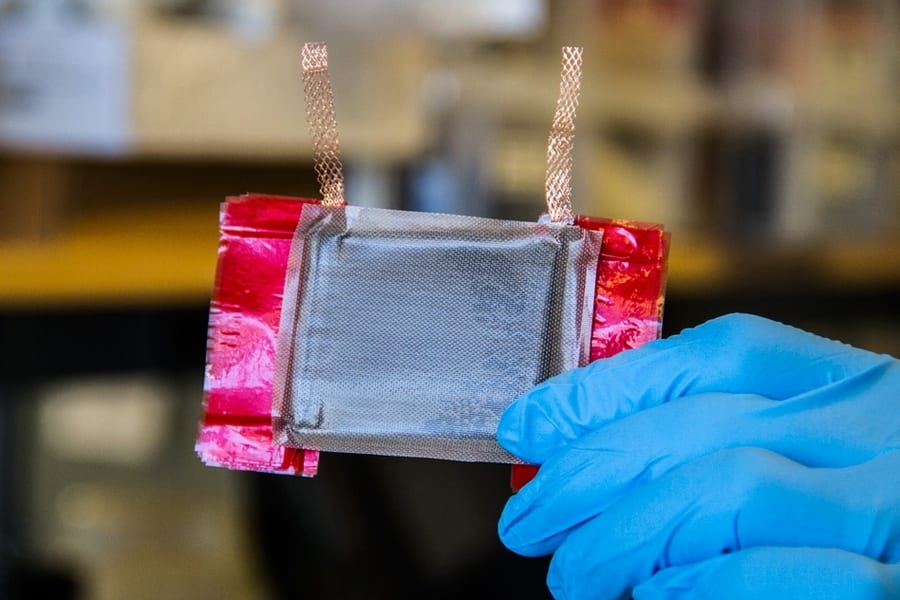 Airbus, for example, first started using advanced composites on a small scale within the Airbus A310’s vertical stabilizer 30 years ago, to today’s Airbus A350 XWB where more than half of the aircraft’s structure is made from composite materials. One key composite material used by the French airplane maker is carbon-fiber-reinforced plastic (CFRP), which is composed of carbon fibers locked into place with a plastic resin.

“While initially more expensive to produce than traditional metallic parts, CFRP components can save aircraft operators money on future maintenance costs since the material doesn’t rust or corrode. An A350 XWB, for example, requires 50 percent fewer structure maintenance tasks, and the threshold for airframe checks is at 12 years compared to eight for the A380,” according to Airbus.

Because carbon nanotubes exceptional electrical, mechanical, and optical properties, they can be exploited to produce the same type of aerospace-grade composites used in the A350. The MIT team, lead by the paper’s lead author and MIT postdoc Jeonyoon Lee, and Seth Kessler of Metis Design Corporation, an aerospace structural health monitoring company based in Boston, used what they describe as an out-of-oven (OoO) technique.

Using a unidirectional prepreg (a type of woven composite fabric) supplied by Hexcel, – one of the aerospace industry’s largest suppliers of composite fabrics used for making engines and fuselages – instead of curing the layers inside an oven, the researchers wrapped them inside a thin film of carbon nanotubes.

They then applied an electric current to the film, and the CNTs, “like a nanoscale electric blanket” were able to quickly generate heat and cause the composite materials to fuse together just as they would inside the large ovens. Lee told Aviation Today how his team was able to determine that the composites they produced were as strong as the composites produced from the traditional oven curing technique. 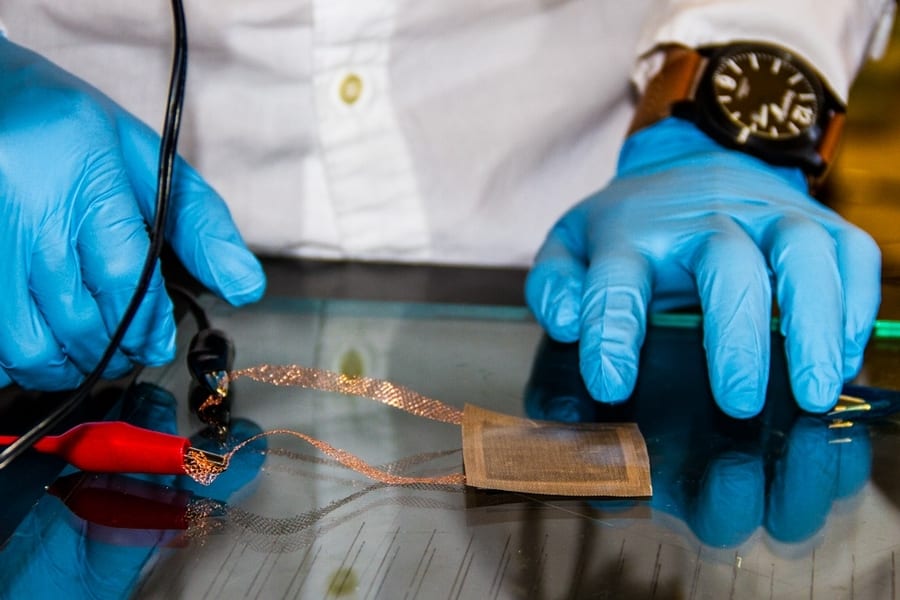 When connected to a voltage source, the film generates heat, directly curing composites without the need for large, commercial ovens. (Jose-Luis Olivares/MIT)

Several programs involving the research around the CNT electric nanoscale blanket concept are now underway, Lee said. While he was unable to share details about those programs, he did confirm that they have determined how their new technique could be used to reduce the amount of time required to manufacture aerospace-grade composite materials. The MIT team is still trying to come up with a solid understanding of just how much time and money can be saved by using this process.

“We have not done these analyses, but we do know that the technique can be used to accelerate the cure and cut the time down to one-third of what it is now. Combined with around 99 percent energy reduction, nearly all the energy is taken out of the cost structure,” Lee said. 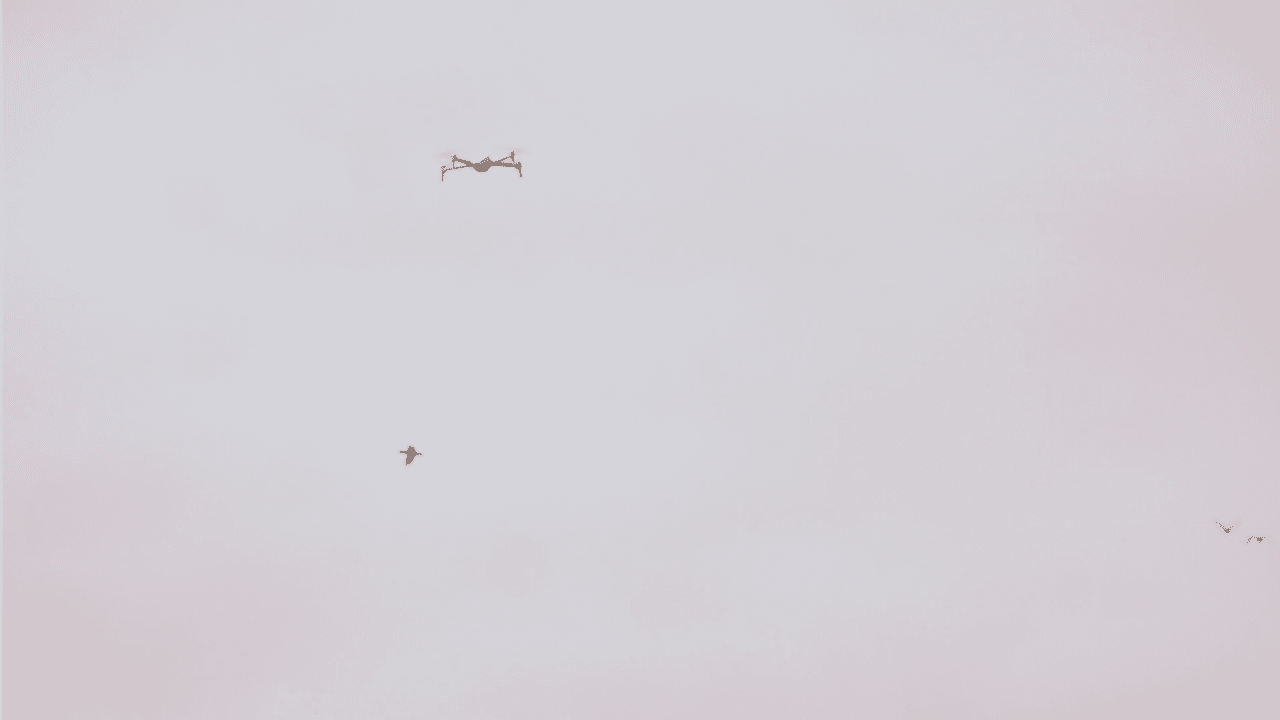 Embry Riddle has partnered with Verizon Skyward to determine the best drones to use for surveillance of sea mammals in distress. (ERAU)

As previously mentioned, a team of professors and researchers from Embry Riddle Aeronautical University’s College of Aeronautics Worldwide Campus in Florida have formed a partnership with Verizon to determine what kind of unmanned aircraft system can be used to monitor situations involving sea animals that are in distress.

A video produced by Verizon features Gennifer Brookshire, a marine biologist and FAA-certified drone operator, who explains that attempting to reach marine mammals in need can sometimes disturb them, whether rescuers approach from the shore or by boat. Seals in the video are shown entangled in fishing line, while others in need of medical treatment are carried off the beach in stretchers.

Specifically, the researchers are using technology from Skyward, a company acquired by Verizon in 2017 that provides commercial UAS operators with planning, tracking, logging, and regulatory compliance tools, among other tools.

Thirtyacre said Skyward was utilized from the planning stages, through safety assessments and actual flights. Afterward, all the data from the test flights was downloaded into Skyward and analyzed. Their research followed two phases, starting within a controlled environment before moving on to the ocean.

According to Thirtyacre, no research had ever been done before to study the acoustic signatures of consumer drones “amid the ambient noise of the ocean.”

“We tested 10 different drones, each at 35 positions between 10-100 meters in altitude and distance. From this data we were able to determine which drones produce the least amount of noise, how altitude and distance influence the noise and created an algorithm for each drone to predict the noise at a given position. That was done in a controlled environment,” Thirtyacre said.

“The testing in the ocean environment proved very interesting. Even though the absolute value of the drone produce noise was well below the ambient ocean noise, we were still able to hear the aircraft, at least until they were a certain distance away. This is due to the unique sound made by the drones and the harmonics. Pinniped hearing is close to the same frequency response as human's in the air so we wanted to find out how much below the ambient noise level we needed to be before the drones were no longer audible,” he added.

This is one of two initiatives Embry Riddle is involved in using drones in this type of operation. The other, the Turtle Tech project, is occurring along Florida’s Space Coast, in partnership with Northrop Grumman to better understand the behavior of multiple sea turtle species living there.

That project involves the use of two types of unmanned aircraft – the Applied Aeronautics Albatross with vertical take-off and landing capability, and the DJI Matrice 210. The researchers are looking to use the drones to capture images of the different sea turtle species, and build a database that could be used as a neural network and help determine whether future images captured are turtles or not.

Under the Verizon project, Thirtycare said the team is still completing their analysis of the data captured.

“We're not completely finished with the data analysis, but it is looking like the drone noise needs to be 10-15dBA below the ambient volume before they become inaudible. For example, if the ambient noise is 60dBA, the drones are still audible until they are below about 45dBA. Depending on the drone, this is somewhere around 40-80m away,” Thirtycare said. 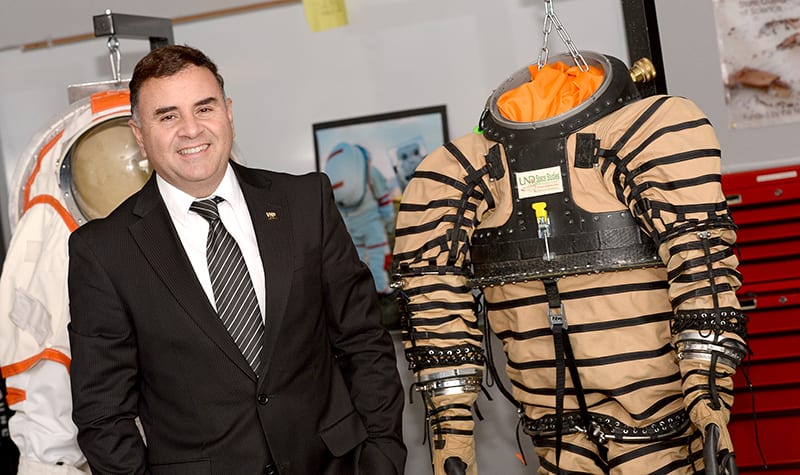 Researchers at the University of North Dakota (UND) are leading a new project funded by NASA to develop a prototype spacesuit using 3D-printed materials.

NASA’s Established Program to Stimulate Competitive Research (EPSCoR) awarded the grant to UND as part of its $11 million award to 15 schools and organizations located throughout the U.S. 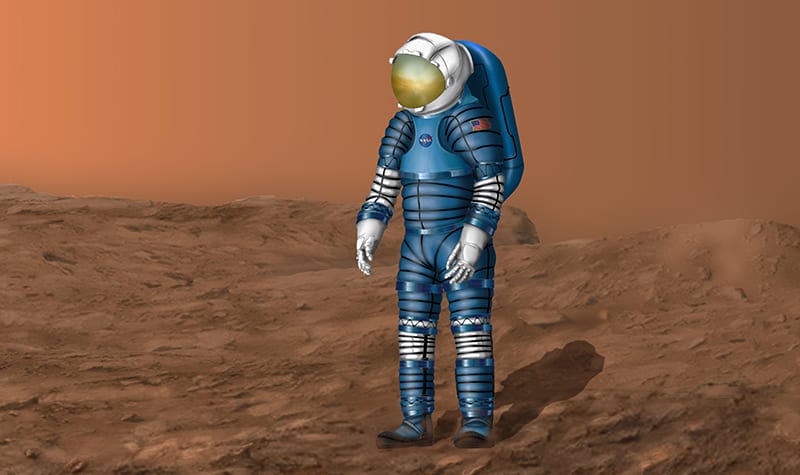 This conceptual image shows the aims of de León’s prototype project. He said nearly everything comprising the suit’s design will be manufactured in his lab on campus. (Concept art by Martin Demonte/HSF Lab/UND.)

“I’m somewhat going back to my roots of developing spacesuits, and now we’re using a completely new system that we developed in the lab,” de León said. “We devoted the past year to make a lot of improvements in our techniques and methods, and NASA recognized that improvement. Now we are ready for action.”

A fully formed suit would need to be pressurized and resistant to the extreme temperatures and abrasive conditions associated with space travel and planetary exploration.

“Building any portion of a spacesuit takes literally thousands of hours of manual labor by extremely skilled textile workers,” de León said, pointing to the latticework of layering and stitching required to keep the glove in one piece. “That’s why a spacesuit ends up being so expensive.”

Funding provided by NASA will also lead to a number of new scholarships offered by de León to students to work with him. The majority of the additive manufacturing will occur within UND’s Spaceflight Laboratory, while the university’s motion capture studio, the BiPEd Lab, will help the team compare movement capabilities between conventional and 3-D printed suits.