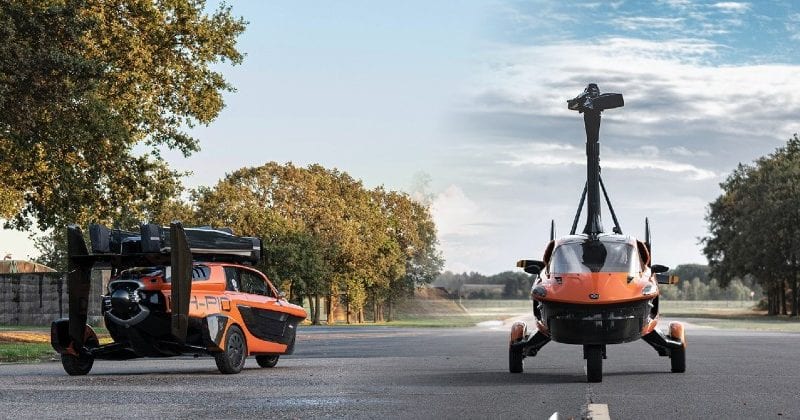 The PAL-V Liberty is one example of a “roadable aircraft” that will soon be allowed on New Hampshire’s streets. What implications will this have for future air taxis? (PAL-V)

The state of New Hampshire recently passed first-in-the-nation legislation that allows flying cars on public roads and regulates their use.

Hailed as a “stepping-stone towards more futuristic mobility solutions” by Keith Ammon, a former state representative and current dealer for Dutch flying car-maker PAL-V, the legislation, signed into law July 24, actually has very little to do with electric vertical takeoff and landing (eVTOL) air taxis as imagined and invested in by Uber, Joby Aviation, Airbus and other industry leaders.

There are a few major differences between the potential eVTOL market — which hopefuls believe is a transformative opportunity to establish relatively affordable aerial movement within and between congested cities — and the actual flying cars this legislation addresses:

PAL-V expects its two-person Liberty, which costs $400,000 pre-tax, to be certified by the FAA in 2021 — long before air taxi services are likely to be available, even by ride-hailing giant Uber’s aggressive 2023 target.

But New Hampshire’s landmark bill, written to integrate the flying cars like the Liberty as well as Terrafugia’s four-seat Transition and Samson Sky’s ultralight Switchblade, may have little to no impact on eventual eVTOL operations, neither paving the way for them nor creating unintended regulatory hurdles.

The bill introduces the term roadable aircraft into the state’s legislative diction, defined as “any aircraft capable of taking off and landing from a suitable airfield which is also designed to be driven on public roadways as a conveyance.” It also requires owners to have a valid aircraft registration, conduct inspections as needed and pay a $2,000 municipal registration permit fee payable to the city or town in which they reside.

Since they aren’t designed to be driven on public roadways, eVTOLs shouldn’t be affected by any statutes that reference roadable aircraft.

The legislation also establishes a commission to further “study the on road usage of non-traditional motor vehicles, such as all terrain vehicles and golf carts.”

As defined, it seems unlikely the commission will explore eVTOLs, Brent Skorup, senior research fellow at the Mercatus Center at George Mason University, told Avionics International, but some provisions regarding transportation network companies (TNCs) — which includes Uber and Lyft — could apply to air taxi operations.

"The TNC provisions could arguably affect some eVTOL companies, depending on their business plan," Skorup said. "Under New Hampshire law, a TNC is essentially any ridesharing company that creates software to match riders with 'drivers.' These laws are intended to cover traditional Uber and Lyft operations. With the provisions limited to 'drivers' and 'personal vehicles,' however, I don’t see many eVTOL companies being affected."

"In any event, the new TNC rules are deregulatory—they prohibit local regulations and fees for TNCs and prohibit airports from charging TNC rides a higher fee than cab rides," Skorup added.

Nevertheless, New Hampshire — a state known for prioritizing personal freedom more than most of its Northeast neighbors — now leads the nation on integrating personal flying cars into its public roads.

Whether this legislation will help pave the way for eVTOLs, which the aerospace industry believes more likely to realize Jetsons-era dreams of flying cars than roadable aircraft, remains to be seen, but Mike Hirschberg, executive director of the Vertical Flight Society, views it as a positive development.

“We are very pleased to see that New Hampshire has seen the revolutionary potential of advanced air mobility and seeks to embrace it for the benefit of its citizens,” Hirschberg told Avionics. “We see a transformative Electric VTOL Revolution on the horizon and roadable aircraft will help to broaden the imagination and prove out many key use cases and concepts.”