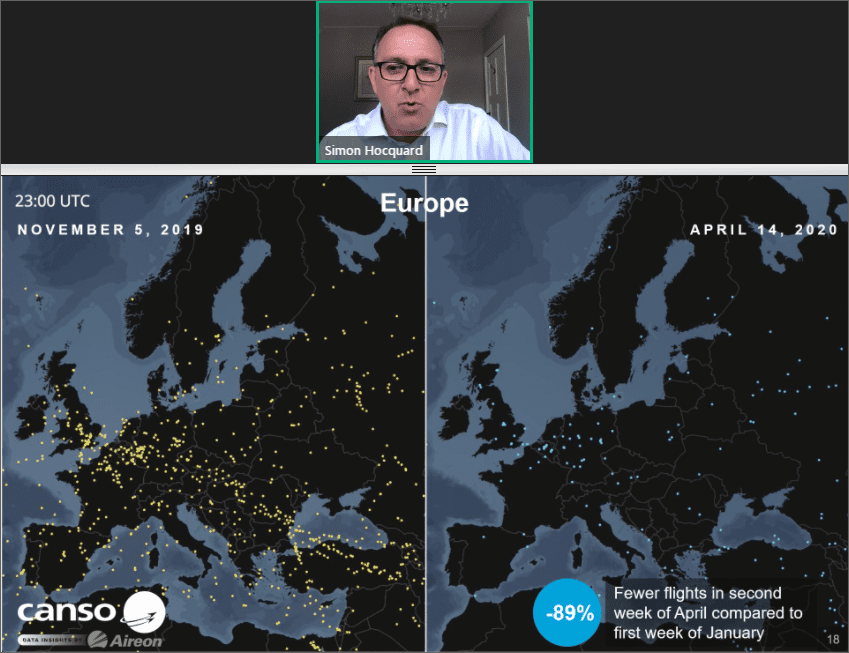 CANSO Director General Simon Hocquard discusses ADS-B data indicating an 89 percent drop off in flights to and from Europe since mid-January due to COVID-19. CANSO and Aireon presented findings during an Apr. 16 webinar.

The analysis of space-based Automatic Dependent Surveillance-Broadcast (ADS-B) data on flights before and during the COVID-19 shock may help aviation recover economically, according to Aireon CEO Don Thoma.

The real-time and historical ADS-B data from aircraft relies on the Iridium constellation of 66 satellites.

On Apr. 16, the Civil Air Navigation Services Organization (CANSO) and Aireon kicked off an effort to share such data with the aviation industry, including air navigation service providers and airlines.

"At the holistic view, part of what we're doing with this initiative is we're not just looking at the global aspect of what's happening from an air traffic perspective, but pulling together the members of CANSO to start doing some deep dives," Thoma said during a CANSO/Aireon webinar on Apr. 16, "An ATM [Air Traffic Management] Data-Driven Response to COVID-19," featuring Thoma and CANSO Director General Simon Hocquard.

CANSO and Aireon was to hold its first such "deep dive" on Apr. 16 with air navigation service providers (ANSPs) from Latin America and the Caribbean.

"We plan to do a continuing set of these deep dives bringing experts in from the industry and from the CANSO membership to look at this data to draw conclusions and support for what's happening in a given region, how you draw parallels with other regions, to what impact it will have on a specific region," Thoma said. "For an air carrier, that's where the benefit will come in. They'll understand what's happening regionally, globally, etc. Aireon has been working with our customers-the air navigation service providers – as well as some airlines in trying to better understand from this data how it can be used to support their analysis, operations, [and] planning for what happens going forward."

Thoma said that ADS-B data will help airlines and cargo companies minimize losses by better targeting of flights to regions where air carriers are able to realize some profit.

"Everybody knows the airline industry is incredibly data-driven," he said. "They look at data on every aspect of their business from their operations, to their maintenance, to their passenger yields, to their pricing. We've seen certainly through our customers and airlines that access our data that there's a substantial amount of desire to get better insights into what's happening globally and to look at the data in an area where access to real time critical data on a holistic basis certainly helps expedite that analysis."

Such data "will be really important for them to maximize the recovery from their perspective because it's [COVID-19] a huge shock to the airline industry and anything they can do to help improve the exit out of the shock is very useful," Thoma said. 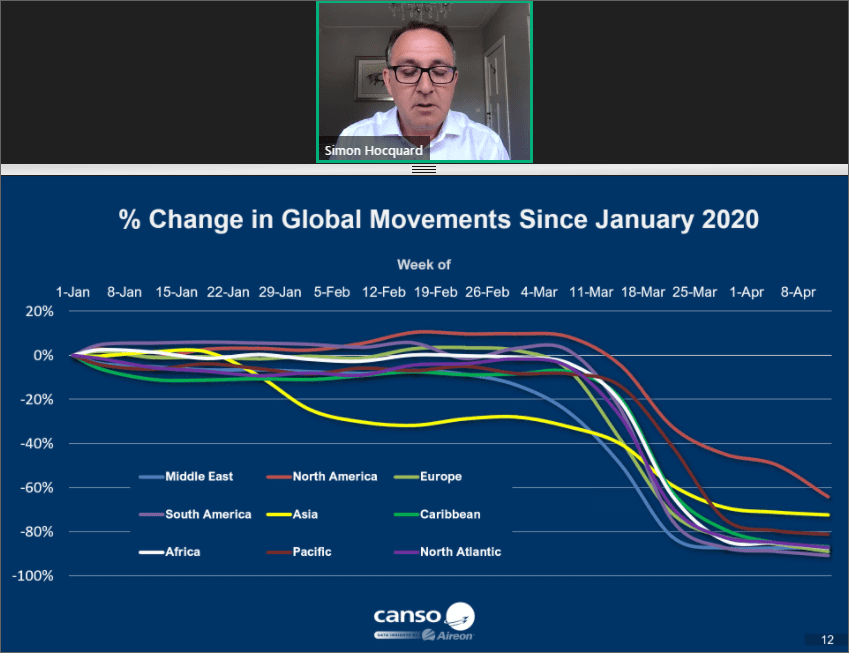 Globally, flight hours declined from 214,740 on Nov. 1 last year to 63, 488 on Apr. 13 – most precipitously starting at the end of March because of broader flight restrictions by the United States, European Union, and China, according to Aireon and CANSO data.

Contrary to what he called the common wisdom, Hocquard said that he does not predict a "V" shaped bounce back for air traffic, but rather a more gradual "U" shaped recovery with a lag at the bottom of the curve.

"Since the pandemic first started, we've been dealing with a dynamic air traffic picture globally, travel restrictions, changing air cargo patterns, the complete closure of international airports, the grounding of airlines, and so on, and at the same time we're keeping the ATC, the air traffic control infrastructure, operating to enable repatriation flights, medical support flights, and the transport of vital goods," Hocquard said.

"Aircraft are still flying and quite a lot in some parts of the world," he said. "As with any crisis, confusion reigns supreme, and only through timely and accurate data and analysis can we find our way out of the crisis. Now more than ever, we need data to help, to understand the current crisis, and charge our way through it."

Austrian Airlines to Use Lufthansa Charts