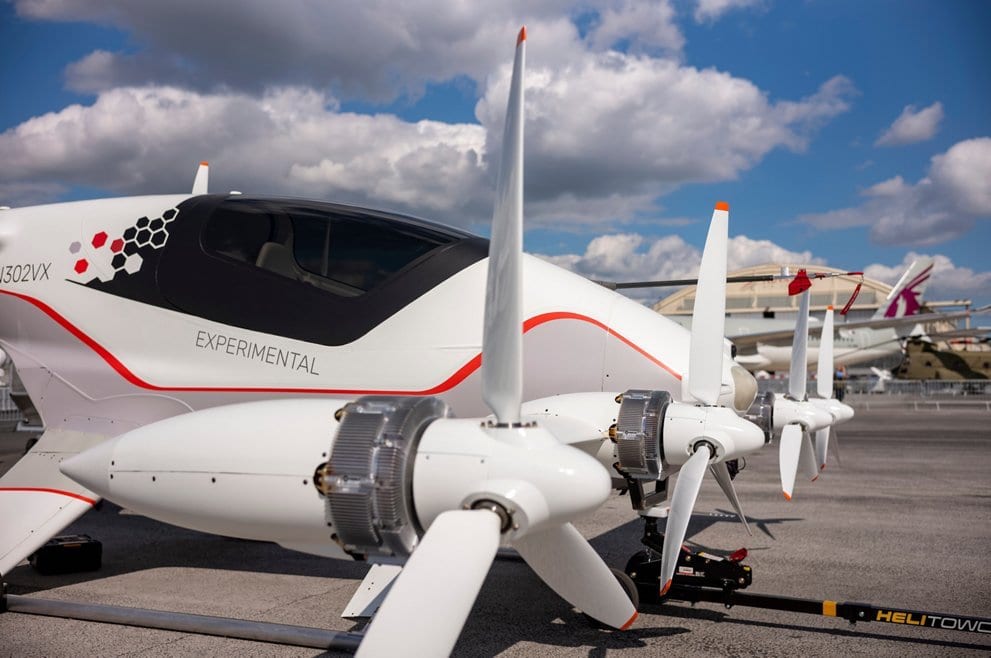 In this article, Andrew Patton, advisory board member and angel investor for ZeroAvia, a U.K.-based startup currently developing a zero-emission powertrain for aircraft, discusses the potential benefits electric propulsion could bring to commercial aviation in the future. Pictured here, is the Vahana, an experimental self-piloted electric aircraft that Airbus flight tested for several years as a way to evaluate the technical challenges associated with electric air taxi operations. Photo: Airbus

In many ways, the history of commercial aviation has been a quest for more speed, altitude, and economy. Propulsion technology, in particular, has played a crucial role in reaching these goals, and historically, the introduction of advanced propulsion tech has driven dramatic advances in aircraft capability.

Today, the industry is beginning another sea change in propulsion technology. Electric propulsion promises reduced fuel costs, longer maintenance intervals, and increased reliability, to say nothing of its environmental benefits. What’s exciting about a move to electric power, is how it will fundamentally change aviation in the ways that we cannot yet clearly predict, much as the jet turbine forever changed the way we flew 60 years ago.

The Complexity of the Piston Engine

By the 1940s, wartime generated massive pressure on aviation to achieve new performance levels. As the demand for engine power increased, so did engine size and complexity. Adding more cylinders, superchargers, turbochargers, and other power generation devices introduced additional complexity and moving parts, each of which came with its collection of failure modes. Many of these parts needed to change direction millions of times and initiate millions of separate combustion events during each hour of operation. As power output increased, reliability and high power-to-weight ratios only became more challenging to achieve.

For postwar airlines, these powerplant-based limitations restricted the development of the size and speed of aircraft. In general, scaling much past 100 seats was problematic, and these smaller aircraft were not as well-equipped to bear the fixed costs of the crew and other overhead. Thus: high prices and limited ability to unlock latent demand at lower prices.

The Simplicity of the Turbine Engine

From front to back, a gas turbine works by having a compressor that sucks in air, compresses it to high pressure, then injects fuel into this compressed gas, which combusts, adding energy to the system. Then, the hot, high-pressure exhaust gas releases through a turbine, which spins in response. This turbine is what directly drives the compressor.

The gas turbine showed promise from the beginning because of the comparative simplicity of its design: a single moving part (more or less) and a continuous combustion event, initiated at engine startup. As turbine technology has developed, first as the turbojet, then as the turboprop and the turbofan, engineers developed ways to manufacture increasingly intricate and performant components (e.g., turbofan blades, single-piece “blisks,” etc.). Yet the underlying topology of the powerplant has mainly remained the same. Indeed, modern large turbofans have become increasingly reliable as their power output has grown - in stark contrast to piston technology.

This ability to scale gracefully and reliably to higher power levels directly translated to more substantial and faster airliners - and almost immediately, quantum leaps were realized. In its very first configuration, the Boeing 707 carried more passengers than the Super Constellation, cruised at nearly twice the speed, and flew above far more inclement weather. Rapid evolution brought the 747 into service just over a decade later - with over three times as many seats as the 707.

The introduction of the jet turbine provided undeniable benefits. However, one performance metric in which they are still relatively similar to a piston engine is fuel efficiency: specifically fuel consumed per seat-mile. Though turbines have improved since their infancy, on a per-mile, per-seat basis, modern jet aircraft only now match 1950s-era piston-engine airliners on this same metric.

Fuel isn’t entirely fair to jets, as they are traveling nearly twice as fast as the fastest piston-engine airliners. Still, it highlights an ongoing problem that is both environmental and economic. The global airline industry spends almost $190B annually on fuel, and this is one of its most significant single expenses at over 20 percent of revenue.

The Potential of Electric Aviation

The promise of pollution-free aviation is exciting, but efficient financial markets, savvy shareholders, and profit-driven airline executives are unlikely to sign up for electric power unless it can significantly benefit their bottom line. If the electrification of road travel is any example, the electric flight has the promise to reduce costs, decrease air pollution, and increase safety/reliability.

Electric Motors: Even Simpler than Turbines?

Most obviously, the simple, single-moving-part topology of electric motors is similar to jet aircraft. However, electric motors do not require a high-temperature power turbine section, which must withstand incredible thermal stresses while rotating at extremely high speed. This technical influence makes them simpler to construct and maintain, and, we expect, will offer a dramatic extension of required maintenance intervals.

Today, aviation-capable electric motors are available, but only at relatively low power levels: under 1MW. But efforts are underway to scale output. One exciting project in Germany seeks to demonstrate extraordinarily lightweight and powerful superconducting motors in the 1-10MW class. These motors should offer superior power-to-weight ratios as compared to turbines.

In order to drive electric motors, we need a source of electrical power. It can be provided by batteries. Battery cells are at the center of transport discussions – from electric vehicles to train locomotives. But two fundamental limitations make batteries unsuitable for aviation.

First - today’s batteries are too heavy, on an energy-per-unit-mass basis, to practically power an aircraft. Depending on how one measures their specific energy, electric-battery powertrains are about 10x as heavy as a comparable kerosene-powered turboprop. Aircraft are incredibly weight-sensitive; their performance is degraded in a nonlinear way if overweight.

Worse yet, the history of battery evolution over the past 30 years shows minimal annual improvement (on the order of 4 percent) of this metric. So, barring the development of a disruptive new lightweight battery chemistry, it’s unlikely that we’ll see a battery with the power-to-weight ratio needed for commercial aviation applications any time soon.

Second - batteries do not charge quickly. While modern airliners can be refueled entirely after a multi-hour flight in a matter of minutes, today, the best production battery packs available have recharge times of over 45 minutes. Similarly, there’s no reason to believe that this will suddenly change barring fundamentally new chemistries.

To better understand why these two things are essential in aircraft, we can look at the utilization and energy storage mass fraction (see chart below) of several different types of vehicles. 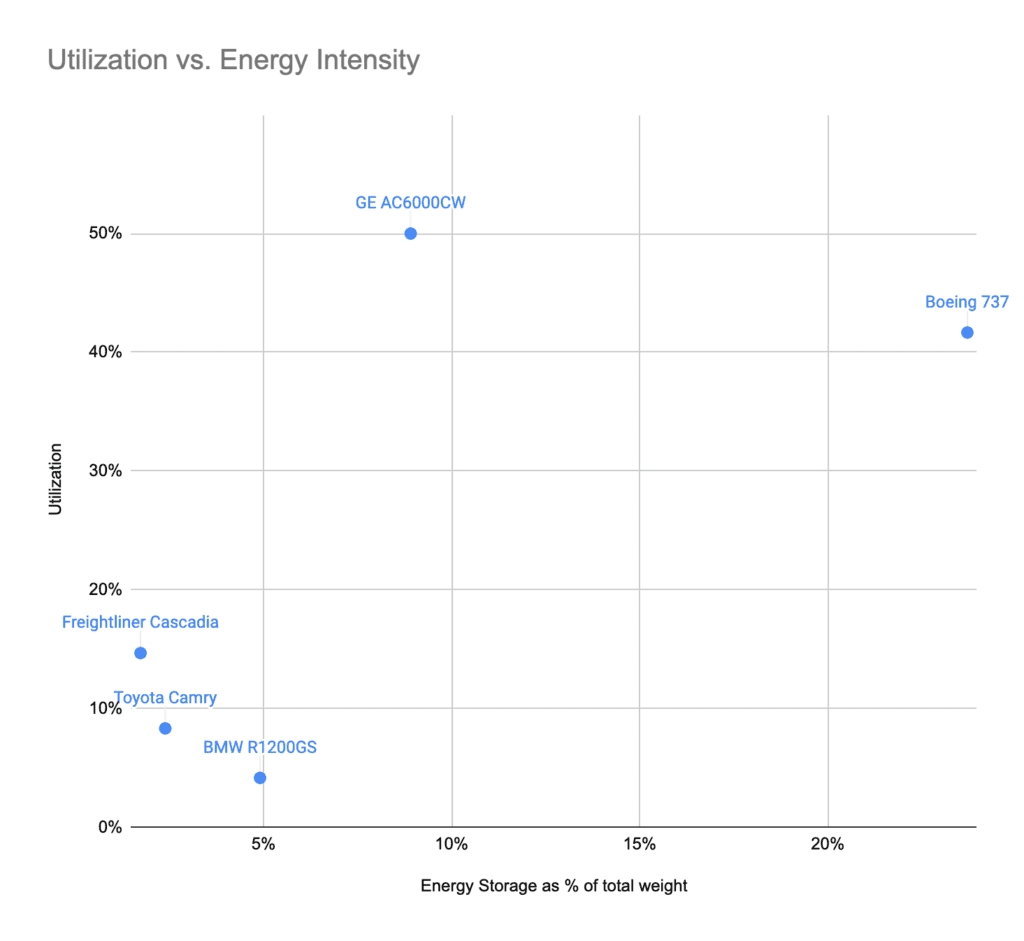 Types of utilization examples listed on the graph: GE AC6000CW is a rail transport system; Boeing 737 is an aircraft; Freightliner Cascadia is an on-highway truck; Toyota Camry is a mid-size car; BMW R1200GS is a motorcycle.

Batteries are excellent for low-utilization, low-energy-storage-mass applications like personal vehicles, where there is plenty of downtimes to recharge. But larger vehicles that use a higher fraction of each day are difficult for batteries. In essence, there’s either not enough time in the day to charge them, or an expensive solution, like swappable battery packs, must be implemented.

Additionally, ground vehicles, which have a tiny fraction of their mass consumed by fuel (<10%), typically can accommodate the increased weight of electric battery storage. Aircraft, though, already have significantly higher mass fractions devoted to fuel (quickly above 25%). There’s no room to increase energy storage mass without greatly degrading performance (range, payload, or both).

But there is an alternative. Opting for a Hydrogen Fuel Cell (H2FC) solution has the potential to reach the high energy densities required by aviation. Current H2FC drivetrains based on automotive technology already have a power-to-weight ratio that’s only 3x lower than current turbine propulsion. And with further technological developments, H2FC systems can eventually deliver the power/weight ratios required to meet the demand of today’s commercial air travel.

Today, the best production battery packs today have 200 watt-hour/kilogram (Wh/kg) energy density, 1,000-2,000 cycle life, and recharge time of over 45 minutes. In contrast, a liquid hydrogen fuel cell system can get to more than 3,000 Wh/kg, over 15,000 cycle lifetime, and can refuel in 20 minutes. Therefore, the higher the energy intensity and utilization, the more the balance tips towards hydrogen.

Andrew Patton, an aerobatic pilot who also serves as the strategy and growth lead for Project Wing, is an advisory board member and angel investor at ZeroAvia.

Investments in H2FC and renewable energy pave the way

The automotive industry has been investing in hydrogen fuel cell systems for 30+ years. Today, there are nearly 11,000 H2FC vehicles worldwide. While most are in California and Japan, hydrogen as a transportation fuel is making a resurgence. Japan plans to highlight its hydrogen advancements at the 2020 Olympic Games in Tokyo.

Simultaneously, the cost of renewable electricity generation has quietly dropped below that of fossil-fuel-based electric power. And yet there are no highly viable large-scale energy storage systems to help manage renewable generation. Indeed, there are situations where utilities pay customers to take power during times of low demand or simply turn the renewable source from the grid and forego the benefits of low power prices. Distributed electrolysis can use this surplus renewable power to create hydrogen for aviation fuel, thus providing a “one-way” grid-connected storage capability.

This confluence of fuel cell maturation and the increasing availability of low-cost clean electricity sets the stage for the development of clean hydrogen fuels for aviation.

The aviation industry has continuously reinvented itself around new propulsion modalities over the past century, and we expect this to be no different going forward. We can expect to see the first electric aircraft reaching commercialization within the next five years if airlines, manufacturers and certification bodies embrace these new propulsion technologies and the possibilities they hold for both improving aviation economics and industry decarbonization.

And just as the jet engine transformed aircraft design, we expect the unique characteristics of electric motors to enable more innovation in air vehicle development. These specific changes include distributed propulsion, electrified personal and urban air mobility concepts, a wide range of autonomous crew-less aircraft, and more. Alongside an expansion in air travel, these new applications are perhaps some of the most exciting consequences of moving into an Electric Age of aviation.