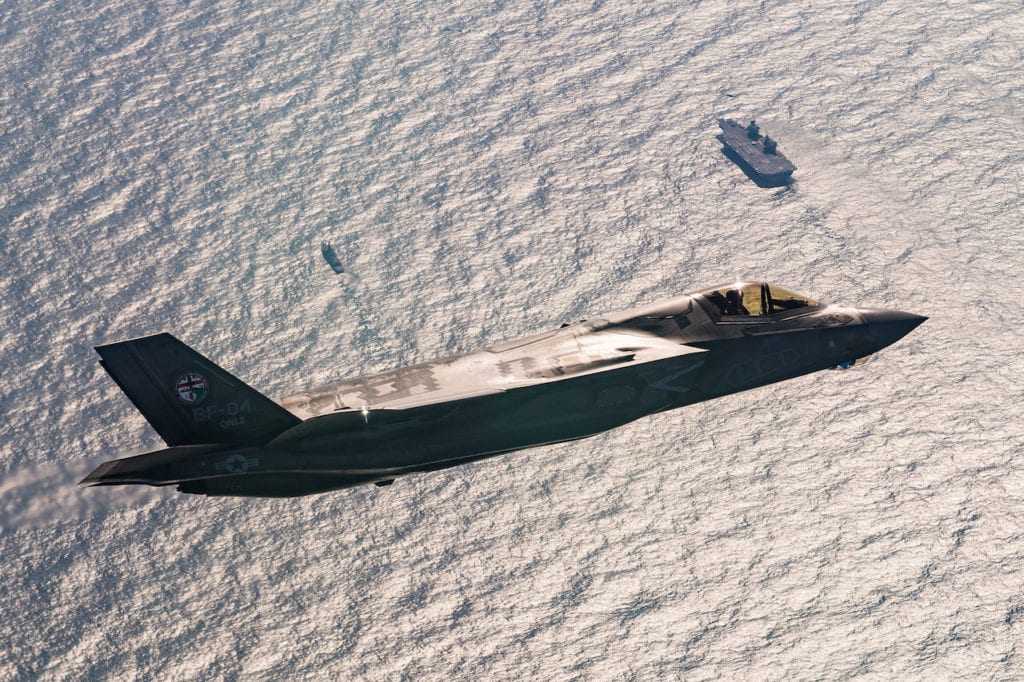 Lockheed Martin expects to deliver a total of 140 of its F-35s in 2020, a slight increase to the number of F-35 deliveries completed in 2019. Photo: Lockheed Martin

Lockheed Martin on Tuesday reported a strong close to its 2019 fiscal year with double-digit top and bottom line growth and the company expects further gains in 2020.

Lockheed Martin Chairman, President and CEO Marillyn Hewson said 2019 was “remarkable” and “extraordinary” during an earnings call with analysts.

Sales at the Aeronautics, and Rotary and Mission Systems (RMS) segments were up in the high single digits on F-35 fighter sustainment and development work, classified work, Army sustainment and undersea combat systems programs, and for work on the Littoral Combat Ship and Aegis programs.

The bottom line gains were driven by a pension tailwind and higher operating profits at three operating segments: RMS, Space and Aeronautics. These segments benefitted from work on the Advanced Extremely High Frequency, Next Gen OPIR, and GPS III satellite programs, fleet ballistic missile programs, Sikorsky helicopter programs, F-35 sustainment, development and production, and the absence of reserves taken a year ago at RMS.

In 2020, Lockheed Martin expects sales between $62.8 billion and $64.3 billion, up from around $62 billion offered in October during the third quarter earnings call, with earnings per share between $23.65 and $23.95. Growth is expected in each of the company’s segments.

Lockheed Martin tallied $5 billion in F-35 orders in the fourth quarter as it finalized Lot 12 and 13 production contracts and added 112 aircraft to the backlog, lifting the backlog to 374 F-35s. The Lot 14 contract is expected to be finalized early this year, she said.

Kenneth Possenriede, Lockheed Martin’s chief financial officer, said on the earnings call that the F-35 program will remain a stout contributor to growth with sales up about 8 percent, driven mainly by production, development work that is up about 10 percent, and sustainment in the high single digits.

Within five years, sustainment revenue on the F-35 “will likely double in size from a sales perspective” and over the next 10 years “potentially” could triple, becoming the fastest growing portion of the multinational fighter aircraft program, Possenriede said. Sustainment growth over time will be driven by increasing demand for spares and modernization efforts, even as the company drives down operating costs for its customers, he said.

Under a nearly $99 million contract announced by the Pentagon on Dec. 30, Raytheon’s next-generation Electro-Optical Distributed Aperture System (DAS) will be integrated into all F-35 variants over the next two years. The system provides "360-degree situational and environmental awareness day or night," according to Raytheon, for navigation, missile and aircraft detection and tracking. The pilot's helmet is to receive high-resolution, real time imagery from six external infrared cameras.

Backlog at the end of 2019 stood at a record $144 billion, up 10 percent from $130.5 billion a year ago, marking five straight years of growth. Backlog is expected to grow between $3 billion and $4 billion in 2020 as orders lighten, Possenriede said. Free cash flow in the quarter was $847 million and for the year was $5.8 billion.