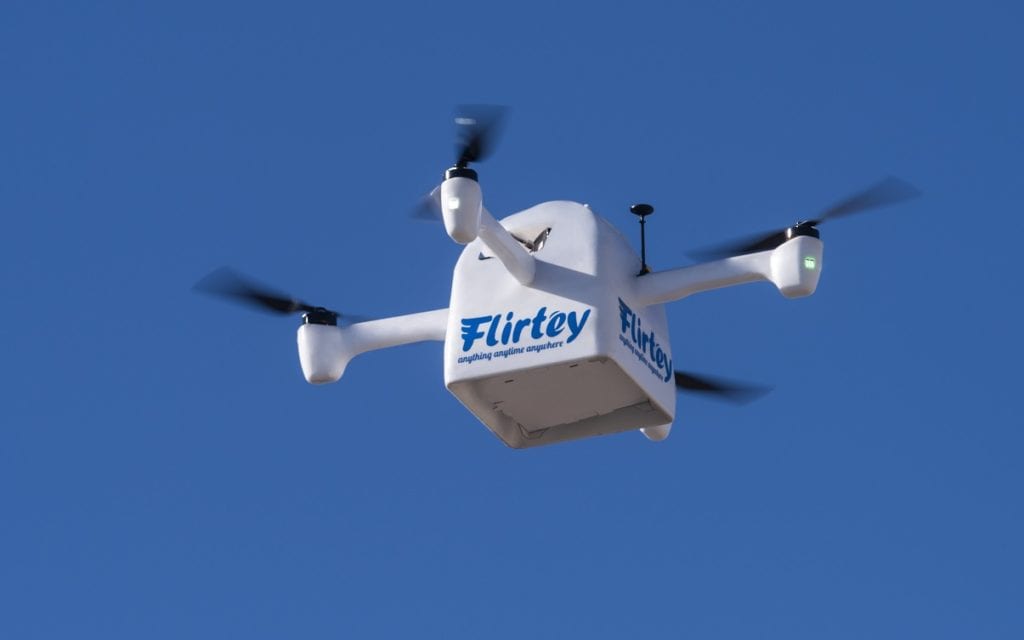 Drone delivery startup Flirtey has begun using its Eagle and Portal system for demonstrations at an industrial center in Nevada. (Flirtey)

Drone delivery startup Flirtey has begun demonstrations of its Eagle and Portal system, unveiled earlier this year, at the Tahoe-Reno Industrial Center in Nevada as a step toward its goal of rolling out commercial drone delivery nationwide in 2020.

The demonstrations themselves are modest, for now: multiple flights a day, operating within visual line of sight, from adjacent to a restaurant located on the TRI Center’s park to one delivery location on the 11-million-square-foot campus, according to Flirtey, with more delivery locations on the industrial campus to follow.

“Flirtey’s goal is to expand from routine drone delivery demonstrations into routine food deliveries on behalf of a TRI Center food establishment to employees on the park,” said Matthew Sweeny, cofounder and CEO of Flirtey. “Flirtey’s goal is to provide its service at a competitive cost.”

It’s a showcase of the capabilities Flirtey announced earlier this year: a new delivery drone, the Eagle; a mobile launch point, the Portal; and an autonomous software platform capable of guiding the drone and handling route deconfliction. Flirtey’s stated goal is to enable ten-minute delivery from restaurants to customers at a “competitive cost,” not yet defined.

The Eagle relies on a combination of altitude sensors and GPS to navigate, broadcasting its location using an ADS-B variant and using computer vision to conduct precise autonomous landing. Flirtey hasn’t released any other major technological specifications of Eagle, though it is in the process of acquiring type certification for it from the FAA. In September, Sweeny said the company had received waivers to conduct drone delivery at night, beyond visual line of sight, and with one pilot overseeing ten drones.

“I’m not going to go into the proprietary details of what we’ve built, but … I think we are very close to no longer needing visual observers and thereby scaling the industry,” Sweeny said at the time, discussing the ability to fly beyond visual line of sight in a scalable way.

It isn’t immediately clear based on information provided by Flirtey what the benefit of these drone delivery demonstrations will be to workers on the TRI industrial campus; they don’t appear to be providing workers access to restaurants off-site, or saving them considerable time in picking up lunch.

Nevertheless, the trials may be the first step to a significant drone-based food delivery operation on one of the largest industrial centers in the United States, building trust with employees, food services and factory operators.