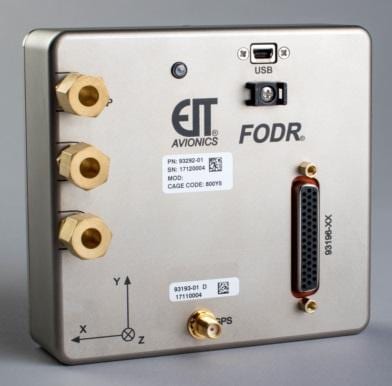 While helicopter operators with large fleets have been able to install Helicopter Flight Data Monitoring (HFDM) systems to help head off accidents, small operators have lagged, and the U.S. Helicopter Safety Team (USHST) is conducting an outreach effort to recommend lightweight HFDM equipage for such operators.

The effort stemmed from a 2017 USHST report that recommended a number of Helicopter Safety Enhancements (H-SEs). One of these was H-SE 82.

"To help prevent fatal rotorcraft accidents due to Loss of Control Inflight (LOC-I), Unintended Instrument Meteorological Conditions (UIMC), and Low Altitude (LALT), the rotorcraft community would benefit from increased use of flight data monitoring," H-SE 82 reads. "Helicopter Flight Data Monitoring (HFDM) devices, including audio/video recording devices, offer the ability to collect data on normal and off-nominal operations and have been proven to improve safety in other types of aviation communities."
"A review of the 52 LOC-I, UIMC, and LALT fatal accidents from the 2009–2013 USHST dataset indicated that the majority of fatal accidents that occurred had insufficient data surrounding the details of the helicopter’s state (i.e.  flight data, audio/video from the cockpit, control positions, etc.) when the event occurred," according to H-SE 82. "This is in direct contrast to commercial aviation where flight data recorders and cockpit voice recorders provide investigators and operators with a multitude of parameters for accident/incident investigation and trend/anomaly detection."
Jeffrey Byrd, the USHST lead on H-SE 82 HFDM and the product manager at Virginia-based EIT Avionics, wrote in a Sept. 4 email that "the accident history highlights that helicopters operate in a challenging low altitude environment, and helicopter pilots are susceptible to task saturation."
"Additionally, some HFDM systems can improve in-flight pilot situational awareness via display or aural alerts, and provide critical data to the pilot in time for corrective action to be taken," he wrote.
Byrd wrote that the USHST HFDM outreach plan "is to engage small operators more effectively."
"One part of the effort is to develop a mentoring process, whereby small operators can meet large operators that already use HFDM to understand use and benefits by example and success stories," he wrote. "Small operators need to understand the ways in which using recorded data can reduce costs of operations and thereby justify the costs of HFDM equipment."

"The HFDM technology effort seeks to highlight new lightweight, low cost equipment, which is required for small helicopters to benefit from HFDM," according to Byrd. "There are two general technical strategies: video/audio recorders and data recorders that capture signals from sensors on the aircraft. The video/audio recorders are typically easier to install and produce data that needs to be played back for review by qualified personnel for exceedances and safety improvements. Data recorders that interface extensively to helicopter systems require more installation effort and produce data that can be easily/automatically analyzed for exceedances and safety improvements."

The USHST is to finish its HFDM outreach efforts by August next year.

"The highest and best use of HFDM is not as a crash recorder, but as an pro-active Data Monitor," Byrd wrote in his email. "Using a simple SMS [Safety Management System] or FOQA [Flight Operational Quality Assurance] process, HFDM data can be used to inform and improve flight crew training, operational techniques, maintenance decision making and help foster a safety culture. Savings from correctly analyzing one expensive maintenance event (such as a rotor or engine over speed) using HFDM data, has the potential to recover the costs of equipment. Savings from not having a fatal accident are larger, and far greater than simple monetary concerns. Additionally, HFDM data can be fed to central databases for exchanging safety information, such as ASIAS,  in order to aggregate and analyze nationwide safety trends using powerful analytical tools. The powerful idea here is to use HFDM data for analysis to get in front of the accident sequence, and to not only to be a recorder for post-crash evidence."

H-SE 82 also "seeks to further promote HFDM by seeking clarification from FAA on several policy issues to clarify installation requirements, FSDO [Flight Standards District Offices] approval guidance, and generally reduce any real or perceived regulatory barriers to install HFDM," according to Byrd. "This effort is running concurrently but will become the main effort after August 2020, and is targeted to complete by February, 2022."