Four companies will now compete to build a replacement for the U.S. Army’s RQ-7 Shadow drone after the service added another two challengers to the $100 million program.

The Army announced July 24 that Arcturus UAV of Rohnert Park, California, and Ashburn, Virginia-based L3 Technologies would join Textron subsidiary AAI Corp. and Martin UAV to compete for each order of the firm-fixed-price procurement contract running through 2022, with a $99.5 million ceiling cap for the award.

Eleven total bids were received for the work, according to a government contract award announcement.

The Shadow replacement, dubbed “Future Tactical UAS” or FTUAS under the Army’s Future Vertical Lift modernization program, seeks to procure non-developmental scout drones that are quieter, smaller and easier to transport and deploy than the Shadow. The Army also wants its new scout drone to employ “Air Launched Effects,” or ALE, meaning it should be deployable from a helicopter mid-air.

The Army has budgeted $132 million for FTUAS through fiscal 2024, and a competitive fly-off is planned for fiscal 2020.

In March, the Army selected Martin UAV and Textron's AAI Corp., which builds the Shadow to compete for orders under the program.

Martin UAV has teamed with Northrop Grumman Technology Services to develop its V-BAT system, a tail-landing VTOL drone with a ducted fan. V-BAT takes up a 9-foot by 8-foot space, can fly for up to 8 hours at a time and can dash at up to 90 knots.

Incumbent manufacturer Textron in March put out a statement acknowledging the award, stating its Shadow drone "continues to deliver thousands of monthly flight hours" for the Army. Textron will offer the Aerosonde Hybrid Quad UAS for the FTUAS phase 1 program, according to a statement from a company spokesperson.  It also is developing a Shadow Block III variant, but that effort is separate from the FTUAS Phase1 activity.

The Army has requested $12.1 million for procurement of 12 Shadow replacement drones at a unit cost of $632,500, plus training and project management support, according to the Army’s fiscal 2020 budget justification documents. The service also requests $18 million to test the new aircraft in its Multi-Domain Task Force and an additional $20 million to support “ALE Early Systems Analysis.”

The future scout UAS will “employ teaming and swarming effects to detect, decoy, jam RADAR and communications, conduct cyber-attack, spoof and jam GPS, and kinetic engagement,” according to the Army. 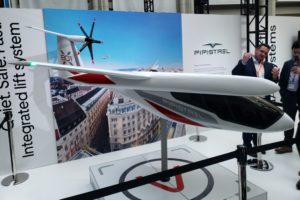 EXCLUSIVE: How Pipistrel's 801 Aims to Leave the Competition in its Wake