What Will Airplane Data Comms Look Like in the Future? Data communications has been introduced domestically in both the U.S. and European Union (EU). Due to differing requirements and operational needs and the availability of different data communications technologies with existing fleets and aircraft offerings,  each region chose different initial technical paths.

As implementation programs successfully progress past initial stages, operational concepts and technical provisions continue to evolve and operational capabilities beyond the current implementations are required. To avoid divergence beyond initial individual data communication programs, the U.S. and EU data communication programs established a set of convergence objectives. As the programs continue toward more advanced operations, a strategic path toward those convergence objectives needed to be established.

The U.S. and EU have developed an air-ground data communications strategy under the auspices of the U.S.-EU memorandum of cooperation, a joint venture with an objective to help address issues related to research and development to support technology implementations.

Steve Bradford, chief scientist for the FAA’s NextGen Program, and Michael Standar, chief strategies and external relations at the Single European Sky ATM Research (SESAR) Joint Undertaking (JU), have overall responsibility for the system-level integration of the more than 25 action plans currently in the works under the venture. That includes the strategy document. The aim of the strategy document is to objectively describe the short-, medium- and long-term ongoing activities and plans of the U.S. and the EU. The document should also operationally and technically address the common challenges and opportunities that exist to achieve interoperability and harmonization.

The key objective of the developed strategy is to guide and drive the future investment plans of the government and the industry in the U.S. and Europe as well as worldwide, and to facilitate convergence to common equipment and minimize unnecessary divergences and investment risks.

This joint effort involved multiple stakeholders from the government, regulators, Standards Management Organization (SMO), and the service and manufacturing industry. As such, it captures the known needs and requirements of airspace users. The actions and activities this strategy identifies will need to be further worked together with the airspace-user community. The aim is to move the necessary elements of the strategy and the results of the actions into the International Civil Aviation Organization’s (ICAO) Global Air Navigation Plan/Aviation System Block Upgrade (ASBU) framework in order to ensure globally harmonized use of air-ground data communications in ATM operations.

From this, a consolidated U.S./EU air-ground data communications roadmap was developed. The roadmap includes a view for oceanic operations. For the area of applications, there is agreement that B2 is the convergence target to achieve harmonization.

An ACARS network has been deployed in the U.S. to support the use of FANS 1/A applications in the short term. In the midterm (pending the outcome of further benefits studies), the U.S. plans to introduce an ATN/IPS network to support FANS 1/A, B2revB and future applications.

For the area of physical links, the U.S. and EU will start with their existing VDLM2-based networks. While both the U.S. and the EU agree that a new high-bandwidth SATCOM capability is probably required in the longer term, the use of existing and emerging high-bandwidth satcom may also be used in the short and medium terms to supplement existing capabilities and help transition to the long term. There is also a need for a new supplemental broadband terrestrial link capability in the long term, although the exact nature of the operational usage of this link is still under development. Because standards development is a time-consuming process, it has been recommended that efforts begin in AEEC, RTCA and ICAO to develop standards for these future technologies.

This article first appeared in our December/January issue. It has been edited. 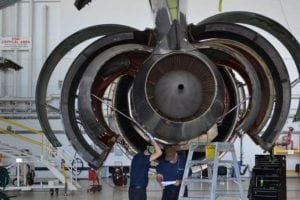