FedEx is expecting to deliver up to 400 million packages this holiday season, and the avionics featured on its fleet of more 650 aircraft will play a major role in supporting the surge in demand for these deliveries. We provide a breakdown of five efforts the air cargo carrier is undertaking to modernize its current fleet of airplanes.

FedEx Express airplanes carry an average of 4 million packages and 11 million pounds of freight to 375 airports in 220 countries and territories worldwide daily. To make sure the company’s aircraft fly optimum airspeeds, and engines operate to their maximum capabilities on every flight, FedEx has digitally customized and evolved its use of Boeing’s airplane health management (AHM) platform over time.

The operation connects aircraft ARINC 429 data streams to the AHM’s graphical user interface (GUI), which can be easily accessed by an airplane mechanic via iPad or iPhone. Earlier this year, Avionics provided in-depth analysis about how FedEx is evolving the way they manage the health of its aircraft.

As the launch customer, FedEx Express could acquire up to 100 new Textron Cessna SkyCourier 408s. The initial order includes 50 cargo aircraft — the additional 50 are in options. The Cessna SkyCourier 408 is a clean-sheet design, twin-engine, high-wing, large-utility aircraft. According to Textron, the SkyCourier will have 6,000 pounds of maximum payload capability, a maximum cruise speed of up to 200 knots true airspeed and a 900-nm maximum range.

In November, FedEx completed a purchase agreement with ATR to purchase up to 50 ATR 72-600F aircraft for delivery in 2020. From there, about six aircraft each year would be delivered over a five-year period. FedEx also selected a customized avionics package for the ATRs that will comply with upcoming airspace equipage mandates.

While adding new regional turboprops to its fleet, FedEx is also upgrading the existing ones with new avionics. In November, FedEx issued a contract to Appareo Systems to equip its fleet of 240 Cessna 208B Super Cargomaster aircraft with Vision 1000s. The Vision 1000 is Appareo’s FAA-certified cockpit recording device that provides the data necessary for FedEx to analyze trends as part of the company’s flight operations quality assurance (FOQA) program. 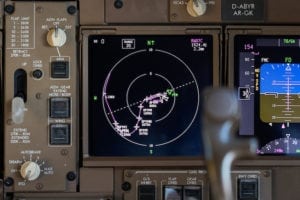