Cellular and Satellite Networks Will Enable ‘MultiLink’ Future of ACARS The evolving ACARS landscape as depicted by Sitaonair. Photo courtesy of Sitaonair

New cellular and satellite communications networks will potentially carry the bulk of the data communicated between aircraft and air traffic controllers, airline operations centers, OEMs and more in the future, according to a new white paper published by Sitaonair. Avionics recently caught up with Paul Gibson, portfolio director for Sitaonair, which is currently in the process of modernizing its role as one of the world’s two aircraft communication, addressing and reporting system (ACARS) datalink service providers.

ACARS has supported air-to-ground aircraft data link messaging — primarily for commercial airliner aircraft since 1978 — providing such things as position updates as well as safety service communications between pilots and controllers. As the amount of data and capabilities featured on more modern aircraft has evolved, the low bandwidth and data communications speeds supported by ACARS has required rapid modernization. That’s why both Sitaonair and Rockwell Collins — the world’s other ACARS data link service provider — have both been integrating more internet protocol-based communications media into the traditional aviation specific subscription-based ACARS networks.

“Everyone thinks of VHF when they think of ACARS and data link,” Gibson told Avionics.

“What’s exciting now is some of the new generation satellite networks like Swift Broadband Safety from Inmarsat are bringing much higher speeds and higher capacity. So it really means rather than just being another media over which we can exchange ACARS messages, it enables aircraft to do more and enables airlines to do more in terms of the type of data they can send and speeds at which they can send it,” he said.

Two recent partnerships announced by Sitaonair with Teledyne Controls and Inmarsat are providing the multi-link landscape that the Geneva-based company wants to establish. Under one partnership announced in June, Sitaonair and Teledyne are enabling the transfer of traditional ACARS data messages over third- and fourth-generation (3G and 4G) cellular networks globally. This is enabled by the use of Teledyne’s onboard GroundLink Comm+ system.

Prior to the Teledyne partnership, Inmarsat signed an agreement with Sitaonair to appoint the latter as a distribution partner for its next-generation SwiftBroadband-Safety (SB-S) aviation service. According to Sitaonair’s new white paper on the ACARS multi-link concept, SB-S is well positioned to become the primary communications link for safety service messaging between pilots and controllers moving forward. United Airlines Boeing 767 aircraft equipped with SB-S are already proving the viability of this concept, and Avionics has also previously highlighted Hawaiian Airlines’ use of SB-S for safety services communications as well.

“One of the things that is unique about SB-S is that it can be used for safety services. Currently we see that roughly 35% of the data that goes through our network is related to safety services, so the SB-S solution is exciting because it means all of that communication can go over the IP link,” said Gibson.

ACARS over IP is also one of the central elements of the ongoing work being done by the AEEC to establish aviation’s internet protocol suite (IPS), which will enable a true multi-link future. The long-term vision for air to ground aircraft data link messaging, Gibson said, is to give operators the ability to choose the link that is most cost effective for them in terms of sending data. Whether that’s 3G or 4G cellular or next-generation satellite communications, or something that has not yet been thought of, operators will no longer be limited to sending data over the low bandwidth, low speed high cost of the traditional ACARS link.

Standardization will also be a key element to enabling the multi-link future that Sitaonair envisions, according to Gibson.

“We see the strength in this multi-link approach where everything is standardized and integrated, and from the airline perspective it’s very easy for them to adopt these new technologies,” said Gibson. 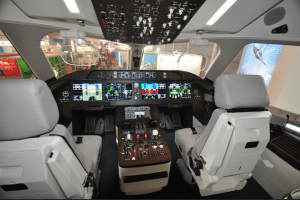