A team of Boeing and Leonardo Helicopters will vie with Sikorsky Aircraft for a U.S. Air Force contract to replace its obsolescent UH-1N fleet for continuity-of-government and missile-field security missions.

Boeing/Leonardo has proposed a version of the Italian OEM’s highly successful AW139 medium twin helicopter for the Air Force mission, arguing that the MH-139 could potentially save the branch up to $1 billion in acquisition costs.

The Lockheed Martin unit is bidding a version of the Sikorsky UH-60M that is in the USAF inventory as the replacement for the 1970s-vintage Bell Helicopter Hueys. Designated the HH-60U by the Air Force, the Black Hawk variant provides unobstructed cabin space for nine emergency security response specialists, their gear and two special mission aviators, according to Lockheed Martin. It also said the HH-60U has the “endurance, armament and survivability to escort” nuclear missile security forces and “crashworthy cabin seating for eight VIPs and one special mission aviator.”

The Air Force for years has been seeking a replacement for the Hueys, which are charged with evacuating congressional officials and some federal executive-branch leaders from Washington and the national emergency, as well as providing security for nuclear missile personnel throughout the Great Plains and performing VIP transport duties in the U.S. and Japan.

The service had sought to pursue a sole-source contract to Sikorsky for a smaller number of Black Hawks, but congressional opposition led Air Force officials to drop that effort and instead seek competitive bids.

The Air Force in July released its final request for proposals for the program to replace 62 Hueys. The director of global sales for Boeing’s vertical-lift programs, Rick Lemaster, said the Air Force is now asking for a price for a total of 84 aircraft.

Boeing and Leonardo demonstrated the MH-139 Sept. 13 at Dulles International Airport outside Washington for Avionics and other media. During a 30-minute flight between Dulles and Manassas Airport, two Leonardo pilots demonstrated the aircraft's maneuvering and hover capabilities. At one point, the pilot showed how he could maintain a hover with very little interaction with the flight controls. The aircraft design also manages to minimize vibration for passengers; the -139 can carry, up to 15 passengers.

While the MH-139 isn’t proposed as a combat helicopter, it will still need to be militarized from its current configuration, which flies within the Maryland State Police airborne and medical transport operations. That would include demonstrating it survivability under weapons fire.

“There are specific Air Force requirements,” said Lemaster. “We have a self-defense avionics suite on there, a missile warning capability to detect IR-guided missiles, and flare dispensers on either side, so you can spit out flares and decoy the missile away."

LeMaster said the MH-139 has military radios engineered to talk through secure channels and exchange secure data. “We have to make sure we provide additional navigation aids for the Air Force that commercial helicopters don’t need. The replacement fleet needs a TACAN receiver. We have to have special military modes for GPS. All of those are off the shelf. No development required. It’s something Leonardo has done for other customers." Boeing maintains that the militarized version of the AW139 will have a cheaper acquisition cost and will be less expensive to maintain over the life cycle of the aircraft.

“We’ve done some comparisons using publicly available data of what an AW139 would cost versus what other helicopters would cost,” said Lemaster, adding that the Air Force will have to be cost-conscious considering all of the other aircraft programs it is considering or for which it is going through the acquisition process. This includes the continued rollout of the F-35, building the KC-46, the B-21, Joint Stars and the TX Trainer.

One aspect of the MH-139 that could prove durable for the Air Force should it stay in service as long as the UH-1N is its scalability for new technologies. The avionics architecture features a central network rack that is easily upgradeable with Ethernet and multiple other avionics data bus protocols.

If selected, production of the MH-139 would occur at Leonardo’s AW139 manufacturing facility at Northeast Philadelphia Airport.

The Air Force said it plans to make a final decision on a replacement for the Huey by May 31, 2018. 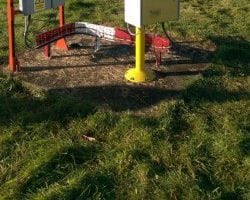