A U.S. Army memorandum has directed the stoppage of use of all DJI (Dà-Jiāng Innovations) unmanned aircraft system (UAS) technology within the service, sUAS News reported.

The memo, as reported by sUAS News, requires Army personnel to “uninstall all DJI applications, remove all batteries/storage media from devices and secure equipment for follow-on direction.”

According to the report, this follows a May U.S. Navy memo, which outlined operational risks that exist within the DJI product family. It also follows an Army Research Laboratory classified report titled, “DJI UAS Technology Threat and User Vulnerabilities,” also from May.

DJI UAS products are the most widely used commercial off-the-shelf drones employed by the Army, according to the memo, as reported by sUAS News. The memo reportedly also stated that although the Army Aviation Engineering Directorate has issued more than 300 separate Airworthiness Releases for DJI products, the Army has directed that the service “halt use of all DJI products.” This includes all DJI hardware and software.

DJI spokesperson Adam Lisberg told Avionics Monday the company had received no direct communication from the Army. The memorandum that sUAS News obtained had a handwritten date of Aug. 2 written in the upper right corner.

“DJI makes civilian drones for peaceful purposes. They are built for personal and professional use and are not designed for military uses or constructed to military specifications. We do not market our products for military customers, and if military members choose to buy and use our products as the best way to accomplish their tasks, we have no way of knowing who they are or what they do with them,” Lisberg said. “The U.S. Army has not explained why it suddenly banned the use of DJI drones and components, what ‘cyber vulnerabilities’ it is concerned about or whether it has also excluded drones made by other manufacturers.”

DJI responded Aug. 1 to previous allegations of unauthorized flight control parameter modifications. Reports had said these modifications “enable DJI drones to circumvent built-in safety features, including geofencing restrictions,” according to DJI. The company issued a firmware update for all drones, which it said fixed reported issues. DJI pledged to continue to investigate additional reports of unauthorized modifications, and would issue more updates to combat any that are found.

“We always encourage our customers to strictly follow their local rules and regulations about drone use so that everyone can enjoy safe skies that are open to innovation,” said Victor Wang, DJI’s technology security director. “Unauthorized modification of a DJI drone is not recommended, as it can cause unstable flight behavior that could make operating the drone unsafe. DJI is not responsible for the performance of a modified drone and we strongly condemn any user who attempts to modify their drone for illegal or unsafe use.”

DJI is based in Shenzhen, China, and security concerns have surrounded the products, and the data it collects, for some time. UAS software company Kittyhawk launched a product specifically for DJI drones. Josh Ziering, co-founder and chief pilot of Kittyhawk, said integrating with DJI solves a big problem: domestic data storage.

“We are very cognizant that our data is sensitive. We have a lot of customers that have a mandate from the federal government because they are critical infrastructure that none of their data can be stored in China,” Ziering told Avionics in May. “[Kittyhawk] Flight Deck has a huge advantage because if you are using DJI GO, it’s talking to China, and that makes a lot of people nervous. We have customers that are specifically mandated to be domestically stored, and Flight Deck offers them the ability to fly their DJI stuff, and not have their data go to China.” 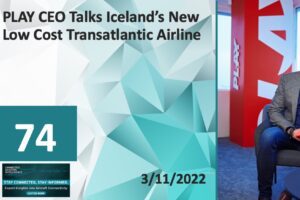 Safran and Duncan Aviation Partner to Provide ADS-B Out Solution