[Avionics Magazine 07-13-2016] Swedish aerospace and defense manufacturer Saab is looking to bring the commercial aviation industry into a new era of open architecture integrated avionics cockpits with its Avionics Management System (AMS). The AMS made its public debut at the 2016 Farnborough Airshow taking place in England this week where Avionics Magazine caught up with Saab Chief Technology Officer (CTO) Nigel Pippard to discuss the next generation platform.

In recent years, Saab has been more well-known in the aviation industry for its military airframes and technologies with its Gripen fighter jet. The company has also introduced remote Air Traffic Control (ATC) tower technology in Sweden, and is collaborating with the FAA to evaluate the technology in the United States, as well. However, Saab also has more than 200 of its Saab 340 and 2000 turboprops in operation globally, and while the company is not currently developing a completely new aircraft type, there will certainly be some interest in the near future from other civil OEMs for the AMS platform.

“Our new Avionics Management System is a complete cockpit suite with remote computing and processing. This is designed for the civil market, as well as military aircraft and helicopter platforms that have mission profiles which require civil certification,” Pippard said.

The AMS suite uses a three-display setup, with a focus on open architecture with software qualified to DO-178C Design Assurance Level (DAL) A, and hardware at the DO-254 DAL A qualification as well. At Farnborough, Saab featured a mockup of the system with an exemplary architecture that had a singular pilot display, a pilot and co-pilot Heads-Up Display (HUD), and another singular co-pilot display, all of which could be manipulated by the user to show weather radar, terrain mapping, airport charting, engine and component health, and other useful flight environment and aircraft information.

Pippard says the real focus for Saab with this system and what he feels will most appeal to civil OEMs is the open architecture element of AMS. Saab has developed AMS with multiple hardware and software abstraction layers that allow any part of the architecture to be modified or replaced with minimal system impact and recertification cost. Pippard wants OEMs to be able to independently implement and integrate new functions with the system based on each users’ needs.

“We’re trying to bring a reality to the civil avionics open architecture concept, an often abused term in the industry. So, we’ve chosen some key principles of that architecture, for the software platform it is ARINC 653 compliant, and we can support any of the known 653 operating systems on the market. We have also partitioned different aspects of the AMS using variability isolation, because we know there are parts of avionics software coding that are relatively static, and then there are things like the Input/Output (I/O) manager that are relatively volatile. We developed an architecture design partition that puts the volatile elements into a simplistic form, and then also to the extent possible, we configured the software specifically the burden of re-certification,” said Pippard.

To manage the cockpit configuration and customization aspects of AMS, Saab is also developing a set of smart tools designed to allow OEMs to work collaboratively with Saab.

One of the more innovative aspects of Saab’s AMS platform is the three-dimensional mapping satellite-based imagery capability developed through Vricon, a joint venture that Saab formed with DigitalGlobe. Within the AMS, Vricon uses DigitalGlobe’s archive of billions of square kilometers of satellite-based Earth imagery combined with Saab’s three-dimensional display mapping technology to give pilots a Google Earth-esque view of the aircraft’s flight path.

“We’ve developed algorithms to actively process multiple images from different aspect angles from different passes of satellites to build up a three dimensional image database. A lot of people that have visited our AMS on display here at Farnborough think it is a synthetic world, but it’s actually not; it’s the real world. There’s a little bit of time required before Vricon has finished integrating the entire globe into its database, but there are significant parts available right now, and once they have that, we’ll go into more of a regular update cycle. The advanced validated reality is going to follow as an incremental capability; today it’s just in development, but the platform is a real product that is our computing platform and software and the open architecture,” said Pippard.

Vricon will complete mapping the entire globe for the database prior to the AMS’ scheduled 2019 Entry Into Service (EIS) date, Pippard said. 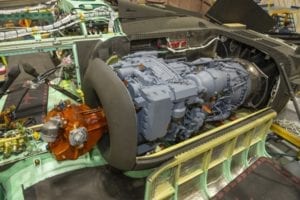