[Avionics Today 03-29-2016] The FAA has approved Gulfstream Aerospace to install the mandated Future Air Navigation System (FANS) 1/A+ avionics on GIV-SP aircraft. FANS 1/A+ uses automation and satellite-based technology to improve aviation communication, surveillance and traffic management. It will allow Gulfstream’s nearly 325 GIV-SP operators to comply with worldwide mandates for the most efficient routing to and from Europe and North America.

“This system was developed by Gulfstream and Honeywell to fully integrate with the GIV-SP flight deck,” said Derek Zimmerman, president of Gulfstream Product Support. “It is not a stand-alone system. The full functionality of the flight management system — auto throttle, auto pilot, vertical navigation — is retained.”

This aims to speed train the flight crew on the system as they are already proficient with the Flight Management System (FMS) and the Control Display Unit (CDU).

Gulfstream is pursuing a similar supplemental type certificate from the FAA for the GIV.

Aegean Airlines to Use CabinVu System 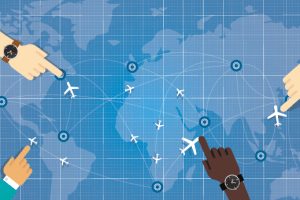