Aircraft maintenance is heading toward a wireless revolution. Now, aircraft technicians can analyze aircraft operating data using tablets and most new aircraft fly with a central server onboard or an Aircraft Health Monitoring System (AHMS) that collects data about the performance of the airplane that ground engineers can quickly and proactively troubleshoot before an event happens that could take the aircraft out of service. This wireless aircraft maintenance revolution is dramatically changing the type of maintenance performed during heavy maintenance. This ultimately reduces scheduled and unscheduled downtime.

Just under a quarter of respondents to our 2016 Avionics Magazine Wireless Maintenance survey have already equipped with wireless maintenance capabilities from suppliers such as Honeywell, Rockwell Collins, Teledyne and Satcom Direct. Moreover, just less than half of respondents from the aviation industry are looking to enable wireless maintenance, with the aim to facilitate instant access to information through a wireless network (61 percent), reduce unscheduled maintenance time (39 percent) and streamline maintenance operations in general (39 percent).

The European airlines group and Maintenance, Repair and Overhaul (MRO) facility, Air France Industries KLM Engineering and Maintenance (AFI KLM E&M), provides maintenance to more than 150 air carriers, and is among the businesses turning to mobile maintenance solutions. The company operates MRO facilities in the United States, Europe, South America, Africa, and India, among others, and employs more than 14,000 technicians, relying on emerging tech to streamline incoming information for their huge workforce.

“[Mobile maintenance technologies] allow us to have access to the history of the aircraft and technical information directly on site and have technicians with “hands-on metal” and not return back and forth to the office to look for necessary information,” says James Kornberg, AFI KLM E&M director of innovations. In operations at one of its main hubs, Amsterdam Airport Schiphol, the company has line mechanics’ replaced ruggedized tablet PCs for iPads. The new iPad capabilities allow the technicians to access the necessary technical documents both on and off the line as well as the AHMS, minimum equipment list, critical deviation lists, and parts and tool availability. “As in our everyday life, the use of mobile devices is increasing,” says Kornberg. The company is also developing algorithms for predictive maintenance with the data collected from new or legacy aircraft equipped with AHMS, which could employ big data analytics to flag potential performance trouble spots for engines and other aircraft systems before they occur.

AFI KLM E&M signed a partnership in November 2015 with Ramco Systems, which specializes in business software systems, primarily in the MRO sector, to set up a joint innovation center in Singapore. At the new center, a team of around 10 people will work to design and develop new, rapid-deployment solutions for strategic areas in the aircraft maintenance industry, particularly mobile solutions. This includes wearable technology, optimization, Big-Data-linked applications, and streamlining and monitoring data.

For MRO operations, AFI KLM E&M is testing out the use of Google Glass — an optical head-mounted display, that is worn like a pair of eyeglasses and can display information like a smartphone in a hands-free fashion. In testing the Google Glass application, however, Kornberg says the company has had some trouble with the battery life and the user experience.

Once the kinks are worked out, airlines and MRO facilities may begin using Google Glass or similar devices to inspect and work on aircraft hands free. Japan Airlines (JAL) for example, with help from Nomura Research Institute, began a trial in May 2014 to use the glasses as an inspection tool for maintenance techs at the Honolulu, Hawaii airport. “What the research has shown us is that people are very interested in having their hands free. That includes the mechanics, directors of maintenance, flight attendants, etc. Wearing it, of course, is down to personal preference. To some extent it’s a fashion type of thing,” Justin Dye, product manager for cabin management and IFE at Honeywell Aerospace, said.

Legacy aircraft are also equipping with AHMS to reduce workload and ensure that the generated data is stored securely in servers for future use. Latin American airline VivaAerobus is in the process of equipping its new fleet of 52 Airbus A320s with a series of linefit and retrofit data acquisition, ACMS and wireless data transfer products from Teledyne Controls.

“[The FDIMU] unit has the capability of interfacing with Teledyne’s WGL Comm+, which is a wireless QAR/DAR that allows us to access the [Flight Operational Quality Assurance] FOQA and ACMS data via 3G/4G without the need of going to the airplane and downloading the information to a laptop or removing the Personal Computer Memory Card International Association (PCMCIA) card to get the information, which is very helpful and removes the risk of losing information when human hands get involved,” Luis Humberto Flores Trejo, operations engineering manager and A320 transition program coordinator, VivaAerobus tells Avionics Magazine.

Flores says the new systems will also allow the airline to prepare for future maintenance and operations capabilities, such as Electronic Flight Bags (EFBs). The WGL Comm+ solution includes the WGL-Aircraft Interface Device (AID) functionality that will eventually allow the airplane to send the information or parameters to the EFB, allowing maintenance techs to manage and use the data immediately. “This will generate the capability of having, for example, an electronic logbook, which will automatically record the times of the airplane failures that it has, as well as extracting information directly from the manuals. In other words, this will really make an interface between the airplane, EFB and the ground systems,” says Flores. While the airline hasn’t experienced any issues as of yet with sending the data, challenges still lie with working to analyze and understand the information. “We just need to get skilled people that have enough experience analyzing the data,” adds Flores.

Mobile maintenance technologies allow us to have access to the history of the aircraft and technical information directly on site and have technicians with ‘hands on metal’ and not return back and forth to the office to look for necessary information.— James Kornberg, AFI KLMA maintenance technician accessing airplane health data via a tablet. Photo courtesy of Boeing

Nearly 78 percent of aircraft in the United States are equipped with In-Flight Connectivity (IFC), according to Routehappy’s 2016 “Global State of In-Flight Wi-Fi” report. As wireless connectivity becomes ubiquitous with aircraft for both passenger use and operations alike, maintenance technicians are looking at a whole new world of IT troubleshooting and maintenance they must come to learn and manage efficiently as IFC systems are installed on aircraft at an increasingly rapid pace.

“Database uploads, cabin management and avionics use a networking architecture. In aviation, we would not send a technician who is not certified to work on an engine and we should develop that same philosophy in relation to aircraft networks,” says Mark Mata, technical training director for the Americas at SatCom Direct, a company that provides global connectivity solutions for business and general aviation, military, government, and heads of state aircraft. The company jumpstarted a program in March 2015 that aims to teach and certify maintenance technicians in troubleshooting and supporting communication systems, such as IFC and other networking technology appearing on aircraft, as aircraft systems become more digitized and technology driven.

“AeroIT is the missing piece today’s maintenance personnel and technicians need in order to support, troubleshoot and understand not just cabin communications but an array of IT products and networks found within aviation,” says Mata. The program, which has certified an estimated 100 technicians, doesn’t focus on one specific aspect of IT, but rather looks to provide participants with an overall theory of past and present wireless technologies.

“There is no procedure to follow or built-in testing for many systems, so the only way to work a system is to have the knowledge of 1) how it should work, and 2) how to check where along the line it is not working. The tradition of rolling your toolbox out to the aircraft and using hand tools applies very little when working a wireless or connectivity issue,” says Mata. 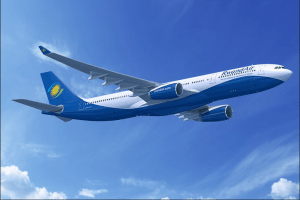