[Avionics Today 01-07-2015] FAA Administrator Michael Huerta recently provided his thoughts on the agency's progress rolling out airspace modernization initiatives and technologies under its NextGen program in 2015 and what to expect in 2016 in a Department of Transportation (DOT) blog post. The agency chief noted progress with the deployment of En Route Automation Modernization (ERAM), Performance Based Navigation (PBN), Data Comm and the integration of Unmanned Aircraft Systems (UAS) into commercial airspace. FAA Administrator Michael Huerta. Photo: DOT.
NextGen
According to Huerta, the implementation of ERAM was a key milestone in 2015 to support continued progress with PBN, Data Comm and Automatic Dependent Surveillance-Broadcast (ADS-B).
"The new system, En Route Automation Modernization, or ERAM, is now the backbone for our NextGen Air Transportation System, driving the display screens used by controllers to safely manage and separate aircraft," said Huerta. "ERAM almost doubles the number of flights that can be tracked and displayed to controllers. It was designed to be the operating platform for other NextGen technologies."
ERAM receives information from ADS-B-equipped aircraft and displays it on air traffic controllers' screens. Huerta also noted that ERAM supports the use of ADS-B to provide "radar-like separation" for aircraft flying in areas where there was previously no radar available. These areas include the Gulf of Mexico and large parts of airspace in Alaska.
The agency also made major progress with Data Comm in 2015, and is currently deploying data communications infrastructure that uses available Future Air Navigation System (FANS) 1/A and VDL mode 2 avionics. Currently, the initial phase of Data Comm has been deployed to facilitate automated Departure Clearance (DCL) between aircraft and air traffic controllers at Newark Liberty International Airport, Memphis Airport, George Bush International Airport, Houston Hobby Airport and Salt Lake City.
According to the FAA's recently updated NextGen Joint Implementation Plan, the agency has added a new pre-implementation milestone for a Final Investment Decision (FID) for Data Comm En Route Services-Full Services to June 2016 to provide a better understanding of the budget constraints around the Data Comm initiative. Full En Route Services will "contribute to more efficient routes and a reduction in flight delays, resulting in increased operational efficiency and enhanced safety while reducing operational costs for operators," according to the implementation plan.
Small UAS
Finally, Huerta's blog post also noted that the agency's biggest accomplishment in 2015 came with establishing a Web-based aircraft registration process for owners of small Unmanned Aircraft Systems (UAS). The registration requirement went into effect on Dec. 21, 2015.
"On the recreational front, our most high-profile accomplishment was launching a streamlined and user-friendly Web-based aircraft registration process for owners of small UAS weighing more than 0.55 pounds (250 grams) and less than 55 pounds (approx. 25 kilograms) including payloads such as on-board cameras," said Huerta.

During a speech at the Consumer Electronics Show (CES) in Las Vegas, Nev., Huerta said 181,000 small UAS have been registered with the FAA. "And, we are working on a rule that will allow for routine commercial operations of small UAS, and we expect to have that rule finalized in the late spring of 2016. In the meantime, we have been authorizing commercial operations on a case-by-case basis, with more than 2,700 authorized to date," Huerta said.

Amapola to Use iPad as EFB 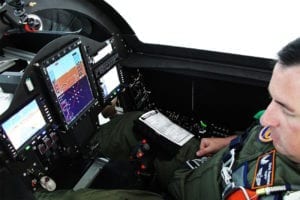