UTC CEO Gregory Hayes Is Not Worried About China

[Avionics Today 12-18-2015] United Technologies Corp. Chief Executive Officer Gregory Hayes announced a restructure for the aerospace and building systems company on Dec. 10, which will cost about $1.5 billion over the next three years. With the company closing its $9 billion sale of Sikorsky aircraft to Lockheed Martin in November, UTC — the parent company for UTC Aerospace Systems and Pratt & Whitney — has a lot on its plate, but Hayes seems bullish about the future of the aerospace market, even in waning segments.

At the UTC investor and analyst meeting earlier this month, Hayes admitted that the company was likely to be impacted by a number of macroeconomic factors in the next few years, including the global economy, which was slow and likely to remain that way “for a number of years.” Furthermore, as the dollar continues to strengthen, particularly with the Federal Reserve System’s recent decision to raise interest rates, the exchange rate threatens to impact sales numbers abroad. The restructure aims to buckle down and prevent further losses, such as those reported midway through 2015.

“I'm tired of delivering bad news,” Hayes told analysts and journalists during a conference call in July when discussing the company’s less-than-impressive second quarter. The second quarter posted sales numbers that had dropped 5 percent when compared to the second quarter 2014 and slashed forecasted sales by nearly $1 billion as a result of “softness” in the aerospace market.

The $500-million-a-year restructuring plan aims to cut costs across the company through 2018 as UTC prepares to face coming headwinds presented by market softness as well as internal ramp ups for aircraft programs with advancements on the horizon, including: the A320neo, certified last month; Mitsubishi Regional Jet, which took its first flight in November; the Lightning II Joint Strike Fighter (JSF) F-35B, which obtained Initial Operating Capability (IOC) in August; and the C Series, whose certification is nearing. These programs, particularly the A320neo, are calling for UTC to find more capital to fund the increase in production for aerospace systems.

Although the company reported only a 1 percent increase in revenue for its aerospace systems this year, it has projected a 4 to 6 percent growth for 2016. UTC is also bullish about the long-term growth in the aerospace market, particularly when it comes to the rising middle class economy in the Asia-Pacific region. This confidence comes despite recent concerns surrounding China’s economy, which has seen a decline due to currency devaluation and market volatility.

“Everybody is all concerned about China. Oh my god china is slowing down, China is awful, the point of the matter is that there are still 15 million people a year in China moving from the farms to the factories. You will see 300 million people urbanize in the next 20 years in China. That means the growth that you’re seeing in Shanghai in the next 20 years, they’re going to build a new megacity, one and a half mega cities every year in China. And it’s the same thing with commercial air traffic. Five percent plus Revenue Passenger Miles (RPM) growth over time continuing,” said Hayes.

China represents 8 percent of UTC sales. The company caters to the aftermarket, military and OEM market segments for aerospace, but Hayes points to the commercial market as a place to grow business in the next two decades.

Boeing has predicted a similar upswing in the Chinese market, forecasting the Chinese aircraft fleet to nearly triple in the next 20 years to the tune of $950 billion in its latest market forecasts.

As UTC prepares to battle a slow growth rate environment it turns to ”focus on doing more with less,” and looks to the restructure to provide an extra $900 million in revenue by 2019.

“There is more to do, and we will find more to do,” said Hayes, speaking to cost cuts across the company. 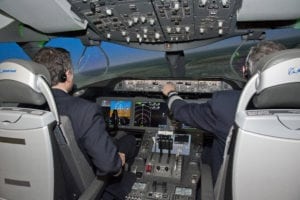 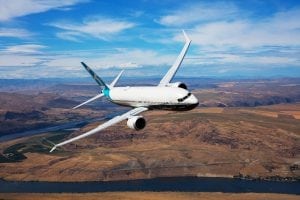