[Avionics Today 07-27-2015] China Eastern Airlines and Delta Air Lines have signed an agreement to expand their partnership and better connect Delta's global network with China Eastern, one of the leading airlines in China. The agreement will include a $450 million investment by Delta to acquire a 3.55 percent stake in China Eastern.

The partnership will allow Delta and China Eastern to compete more effectively on routes between the U.S. and China, provide more travel options for customers in both countries and make joint investments in the customer experience.

"The execution of the Subscription Agreement and the launching of commercial cooperation plan by China Eastern and Delta indicate significant strategic moves of China Eastern to comprehensively reform further, actively explore and develop mixed ownership economy, and actively promote globalized development," said China Eastern CEO Shaoyong Liu. "The cooperation of the parties is based on a global vision and joint strategic blueprint. The parties will take advantage of their respective route networks, flight services, relevant businesses and advantageous resources to fully connect the world's two top economies as well as two top air transportation markets.” 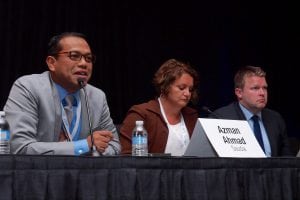