Since the introduction of the Single European Sky (SES) program, the European Commission has appointed a Single European Sky Air Traffic Management (ATM) Research (SESAR) deployment manager, several mandates have been re-scheduled, and while the program has shifted into the Deployment phase, there will be several challenges ahead.

“SESAR validation activities have already started for the solutions featured in Release 5 and will run over the course of 2015 and 2016,” says Michael Standar, chief of strategies and external relations at SESAR Joint Undertaking (SESAR-JU). “During these two years, the solutions will undergo thorough assessments to establish their readiness for industrialization and subsequent deployment. Many of these solutions are part of the first package of ATM functionalities for synchronized deployment in the short-to-medium term across Europe (2015 to 2020), as part of the EU’s Pilot Common Project. Some noteworthy solutions include the introduction of free routing for cross-border and complex airspace to reduce leg distances compared to fixed route networks, the integration of the Extended Flight Plan into the Network Planning system to improve flight predictability, and more dynamic civil-military airspace management to increase airspace capacity.”

Due to spectrum limitations and other technical infrastructure and communication challenges, the European Commission (EC) has decided to delay its original requirement for aircraft Controller to Pilot Data Link Communications (CPDLC) equipage by five years, from February 2015 to February 2020. One of the leading reasons for this was that the ground stations were not properly receiving the approved messaging sets sent from onboard Flight Management Systems (FMS) via Very High Frequency (VHF) Data Link (VDL) Mode 2 to Air Traffic Controllers (ATCs).

“The European Commission was in charge of the implementation process and it called on [the European Aviation Safety Administration] EASA to review the challenges that this implementation has encountered. Eurocontrol has contributed to this review using the data collected by the datalink central reporting office,” says Philippe Merlo, director of ATM at Eurocontrol. “In this review, EASA has rightly highlighted the need for the deployment of a multi-frequency infrastructure, something that was recommended by Eurocontrol several years ago. In addition, some of the other issues highlighted in the review are already being addressed by equipment manufacturers. We recognize the importance of CPDLC and have included it in a number of the new Centralized Services (CS) that are being put in place. CS7.1 will monitor the performance of CPDLC, CS9.1 addresses the infrastructure required and CS9.2 will provide a CPDLC service where this is not already available.”

Pending any changes, the other equipage mandates with direct impact on operators flying in Europe and between Europe and the United States remain the same. The EC’s requirement for operators to retrofit their aircraft with Traffic Alert and Collision Avoidance Systems (TCAS) II 7.1 remains firm for December 2015. With Change 7.1, the EASA estimates that mid-air collision risk decreases by a factor of four. Europe has also pushed its ADS-B Out to DO-260B retrofit requirement to 2020 to align with the FAA’s deadline under the NextGen airspace modernization program in the United States.

The Pilot Common Project is now entering the deployment phase of the six ATM functionalities mentioned above. Going forward, the new European Commission appointed SESAR deployment manager has been formed, which will coordinate the initial deployment of the ground infrastructure, automation platforms, airspace redesign and surveillance and communication enhancements that will deliver the integrated airspace.

Release 5 features 33 Potential SESAR Solutions that will be tested through 38 different flight demonstration exercises that are grouped within 13 operational change categories.

Airbus, Boeing, Honeywell and Thales, are among those carrying out flight demonstration activities and onboard aircraft research and development activities that will lead to actionable flight operational improvements in the form of fuel savings and a reduction in the environmental impact of aircraft over European skies.

“Airbus brings its airborne operational and technical expertise to focus efforts on the definition and validation of concepts that require the interaction between air and ground operators and systems,” said Patrick Lelièvre, head of ATM development and SESAR aircraft WP leader at Airbus. “Besides ATM demonstration activities, flight tests are used to validate ATM concepts and supporting airborne functions in the core program. The main focus in 2015-2016 will be on Initial 4-D, [Airborne Separation Assistance System] ASAS-spacing, surface operations, and enhanced approach procedures with a potential global flight test in Italy early 2016.”

Thales is providing both onboard avionics to support trajectory-based operations to aid in projecting flight trajectories and arrivals with more accuracy as well as on the ATM side. “Thales has indeed participated in January/February 2015 in the VP708 exercise in Rome combining [initial 4D] i4D and ASAS [Sequencing and Merging] S&M functions in the FMS,” said Luc Lallouette, program management office SESAR director at Thales. “The validation report is currently in progress. The i4D flight trials have confirmed the confidence Thales has in the i4D developments, revealing no particular issue in the transition from a fully simulated environment to real flight conditions. I4D technical standards are now quite mature and can support an initial deployment, however it is recognized that further work is needed on the ground side to fully exploit the i4D trajectory exchange capabilities in the context of trajectory-based operations and to extend the use of [Controlled Time of Arrival] CTA procedures to high-traffic density environments.”

In the United States., Boeing is performing ongoing tests with its 787 ecoDemonstrator aircraft, flight testing CAT III GLS capabilities so that these new approach procedures can be used operationally to help reduce aircraft noise and track miles during the landing phase of flight.

“New procedures were also tested on the 787 ecoDemonstrator that combined new and existing technologies. For example, Required Navigational Performance (RNP) procedure to a GLS short final was demonstrated to show the reduction of track miles and community noise. Also, varying the GLS glideslope on final approach and final touch down points were demonstrated to show the operational flexibility of satellite landing systems to improve airport operations. Boeing is in the process of analyzing the flight test data to produce fuel, emission, and noise benefits of such procedures.”

All of these flight demonstration activities will be researched, analyzed and put into real time usage throughout the Eurozone. NetJets Europe is also leading an exciting project that will perform 200 total demonstration flights through the end of 2016 to validate the ability of augmented vision and satellite-based navigation technologies..

“We’re mainly focused on addressing poor weather conditions at airports throughout Europe,” said Jean-Phillippe Ramu, SESAR project manager at NetJets Europe. “The technology that can demonstrate this at small airports is the [Satellite-Based Augmentation System Localizer Performance with Vertical Guidance] SBAS LPV. That can bring precision approaches at almost all small airports. We try to demonstrate the SBAS LPV supported by identifying technologies will enable equivalent CAT II and equivalent CAT III operations at small airports. We’re bringing technologies at reasonable costs for the small and regional airports that enables [pilots] to do low visibility or poor visibility conditions at those small and regional airports.”

“Inefficient final approach spacing is the single most constraining factor to runway capacity. By dynamically calculating aircraft separations, intelligent approach safely reduces separation minima during certain wind conditions based on live wind data,” says Mark Cooper, transport managing director at Lockheed Martin U.K. “Over 150,000 flights were analyzed to understand the behavior of aircraft wake vortices in strong headwinds. The results confirm the theory that wake vortices dissipate more quickly in strong headwind conditions. This means that the distance between certain aircraft can be reduced and the time between landings can be kept similar to those arriving in light headwinds. Intelligent approach enables airports to minimize the impact of strong headwinds on landing rates, thereby reducing delays and cancellations.”

Of course, no mention of Single European Sky deployment activities would be complete without acknowledging the Functional Airspace Blocks (FAB) initiative, which looks to de-fragment the Eurozone airspace by reducing the number of individually state run national ATC centers from 29 to nine. This will eliminate time wasted between flights as the fragmentation transfers pilots to different national ATC centers, constantly changing flight profiles based on procedures and instructions from each center. The most recent advancement around the FAB initiative has been a signing of a Memorandum of Understanding (MOU) between Aireon and the Air Navigation Service Providers (ANSPs) that comprise the Blue Med FAB, which features Mediterranean airspace over the countries of Cyprus, Greece, Italy and Malta. That agreement will allow the Blue Med ANSPs to collectively research Aireon’s space-based ADS-B surveillance to manage traffic in that FAB. Currently, however, there is no agreement regarding how European air traffic control will be managed across all nine. 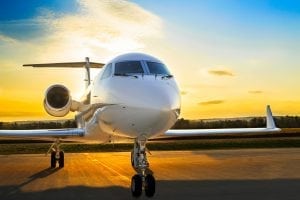