[Avionics Today 05-29-2015] Airbus has delivered the first 242-ton Maximum Take-Off Weight (MTOW) variant of the A330-300 to Delta Air Lines. The Atlanta, Ga.-based airline is the first to receive the aircraft type from among 11 worldwide customers for the option. Delta has selected GE CF6-80E1 engines to power its new A330-300.

Launched in 2012 as Airbus’ latest evolution to the twin-engine wide-body A330 family, the increased takeoff weight A330-200 and A330-300 incorporate a new aerodynamic package, engine improvements and an optional center fuel tank (the latter for the A330-300 version). These upgrades on the A330-300 allow for an extended range of up to 6,100 nautical miles while offering up a reduction of up to 2 percent fuel consumption. The new version of the Airbus’ A330 received airworthiness approval from the European Aviation Safety Agency (EASA) in April 2015, and received parallel certification from the FAA earlier this month.

“The higher takeoff weight allows the airline to fly both trans-Atlantic and trans-Pacific routes, all in unrivalled comfort with operational reliability over 99 percent. The 242-tonne A330 clearly paves the way for the A330neo and A350 XWB to join Delta’s fleet in the next few years,” said John Leahy, chief operating officer for customers at Airbus. 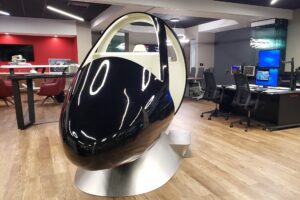