[Avionics Today 01-23-2015] Embraer has selected McMurdo Group to provide complete Emergency Locator Transmitter (ELT) shipsets for their second generation E-Jets, E2. The contract includes McMurdo Group’s Kannad Integra ELTs with the ARINC GPS Interface fitted on the aircraft, and Kannad 406 MHz Survival ELTs for use by crew members in the cabin. The ELTs will be installed in various Embraer E-Jets E2s, including the E175-E2, E190-E2 and E195-E2 versions, starting in 2018.

The Kannad Integra ARINC e-Nav interface transmits the GPS position of an aircraft continuously from the on-board GPS to the beacon. This allows the ELT to store and record the aircraft's position information in real-time. In addition, the ELT also has an internal GPS receiver. The Integra ARINC e-Nav interface obtains additional positioning data by receiving information from the on-board GPS. This allows the Kannad ELT to store and record the aircraft’s latest position information which, when transmitted to search and rescue satellites, can help reduce the search area radius from nearly 2 miles to 200 feet.

“When the beacon is activated, it automatically communicates with the internal GPS to determine its position. If it takes too long to connect to the GPS signal, or if there is an obstacle preventing the beacon's satellite access, the Integra system will communicate with the ARINC e-Nav interface so that it can transmit the last recorded position of the aircraft to the COSPAS-SARSAT satellites within the first minute,” explains Christian Belleux, director of the Kannad Aviation Business Unit.

SIAEC in JV with Panasonic Avionics 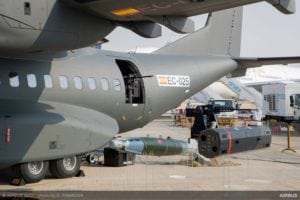