[Avionics Today 08-13-2014] The Dassault Aircraft Services branch in Sorocaba, Brazil, will undergo a major expansion in the coming months in order to better accommodate the demands of domestic and other South American customers. The expansion will add 10,000 square feet of hangar space to the 23,000 square feet of space already available.

Sorocaba, which opened in June 2009, is authorized to perform line maintenance and airframe inspections on all Falcon models except the legacy Falcon 20 and Falcon 100. In addition, the facility is qualified to provide engine maintenance on the CFE-738, Honeywell TFE731 series engines and Pratt & Whitney Canada PW307A and PW308C models.

Following the opening of the Sorocaba Service Center in June 2009, Dassault Falcon Jet has continued to expand the facility with increased manpower, spare parts and tooling. Sorocaba can dispatch an AOG team to support Falcon aircraft anywhere in South America, along with the parts and tools necessary to get the aircraft flying again with minimal delay. Dassault Falcon Jet houses more than $4.7 million worth of high-usage parts in its Sao Paulo facility. 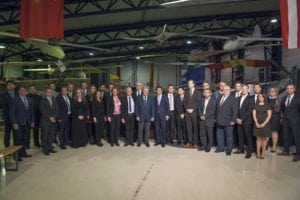