Can an airline really unify a divided country? It was such a grand claim that marked the creation of Air Côte d’Ivoire, national airline of the Ivory Coast. CEO René Décurey thinks the answer is yes, the airline can do it.

After a decade of civil unrest and outright war demolished airport infrastructure in Côte d’Ivoire, the new nationally-supported airline is rebuilding a domestic network.

The airliner was created by the peaceful Ivoirian government with the express purpose of uniting the war-torn country, and it has seen nearly two years of growth since its May 2012 founding, including recent new airplane orders and a growing regional network ranging from Dakar to Brazzaville. Now, it is about to take a big step toward its founding goal as Air Côte d’Ivoire launches flights to nearby destinations, helping Ivoirians bypass underdeveloped roads and reach top business spots. The domestic network takes off in April, one month short of Air Côte d’Ivoire’s two-year anniversary mark.

“Internationally we are growing at an above average rate because we are building a hub in Abidjan. We have started with our hub operation bringing from various parts passengers to Abidjan and from there we transport them into another region,” says Décurey.

Though the airline has now been operating in the international market proper for 13 months, they are just starting their domestic flights now. But they have a good excuse for the delay as no functional airports existed besides the one in Abidjan. According to Décurey, the government has coordinated closely with Air Côte d’Ivoire over the last two years to reconstruct the airports, which were wiped out by war more than 10 years ago.

Abidjan itself is a big business hub in West Africa, but other Ivory Coast areas that would have been growing have been, until now, stunted because of isolation and poor road infrastructure, Décurey says. Without access for investors, businesses can’t grow and, since traveling between Abidjan and rural areas by road takes between 18 and 24 hours, regional air transport is a critical need.

By providing easy access to different areas via two daily flights to cities with growing business communities, such as coastal San Pedro and the well-developed Bouaké, the airline unifies the country through investment and business. President Allasane Ouattara was adamant at the May 2012 airline’s founding that the country needed an airline in order to achieve unity, and as two new Q400 NextGen Bombardier aircraft arrive in September and October 2014, the airline will make a big effort to that end.

“I think there are quite a number of initiatives by the government to bring new investors to these remote places. … We offer a flight in the morning and a flight in the evening, allowing the investors to look at the various topics and they can travel out in the morning and come back,” says Décurey, who is confident the domestic network will lead to growth, which, in turn, will benefit his airline.

Air Côte d’Ivoire chose the Q400 aircraft because of this growth potential. For now, while businesses grow accustomed to the new travel and investment opportunities, the airline will use the regional aircraft for international flights, taking advantage of the plane’s up-to-date avionics to meet SESAR requirements to fly into Europe.

If, as Décurey and Ouattara hope, national demand spikes quickly, Côte d’Ivoire will face a new challenge: building infrastructure. The strong maintenance base and solid professional training department that existed with former West and Central African airline Air Afrique dissolved after the carrier went bankrupt in 2002, according to Décurey. The pilot, technician and ground staff training programs are now also gone, along with the professionals themselves.

“You had avionics, engineers and all this could be done here locally. When Air Afrique disappeared, the technicians disappeared, the pilots disappeared and they were mostly taken over by Gulf carriers. That is the biggest challenge for us: to rebuild the knowhow in maintenance to do locally even up through C-check, cabin crew training, pilots training, etc. This will all have to be recreated because no airline here in West and Central Africa had the power and the critical size to do that up to now,” he says.

Air Côte d’Ivoire is working with the Ministry of Education to create training schools again in Abidjan for key aviation professions, but depending on how quickly new domestic routes spur growth, the country may not be able to build critical infrastructure fast enough.

However, Air Côte d’Ivoire’s so far highly successful track record attracting investors indicates finance needs won’t slow development. Formed in a partnership between the Aga Khan Fund for Economic Development, Air France and the Ivory Coast government, the airline is now 65 percent state owned, with private investors and Air France holding a respective 15 percent and 20 percent. To pay for the Bombardier Q400s, Air Côte d’Ivoire attracted financing from the Cairo-based African Export-Import Bank, which paid 95 percent of the purchase price. On the airline’s investor prospects, Décurey is confident, and even expects opportunities will soon allow the airline to purchase all-new aircraft with fully up-to-date avionics systems, he says.

“The Aga Khan Fund [for Economic Development] has left our shareholding but we are continuing to do a lot of coordination with them so it’s not a handicap for us. We are negotiating now with other institutional banks in order to join our capital structure and it’s very important for us. As I said before, we have three A319s and we have intentionally kept the lease period quite low, allowing us to replace these aircraft as soon as the neo family is coming onto the market from Airbus. We want to change over into neo, [combined with the Q400s],” he says.

Should all go according to plan, these early investments will create a domino effect of growth, in which new routes lead to more new planes, those aircraft create jobs and continued success refuels the cycle to the point of possible upgrades and retrofits. But does any competition stand in the way of this rosy plan?

“Well, if you look at the African market where we operate in West Africa and in Central Africa, the growth can be quite impressive. We have 7 to 8 percent growth in these markets,” says Décurey. However, he adds, the volume in Central and West Africa is still very low for two reasons: taxes and high fuel prices. On every ticket the airline sells, 25 to 50 percent of the price comprises taxes. Such high airfares hugely limit international air travel to and from the Ivory Coast — and there are rumors that “liberalization” in West Africa means even more taxes might make their way into ticket prices.

But Décurey plans to stand in the way of that. “We are very, very actively trying to convince the government not to liberalize the airports. If we could avoid this burden of additional taxes, security fees in the airport and what have you, we could see traffic increases of not only 8 percent, but it could be over 20 percent per year,” says Décurey.

Besides Air Côte d’Ivoire’s own negotiations with the government, Décurey is talking with what he terms “partner airlines.” In fact, rather than focusing on one-upping each other, right now West and Central African airlines are uniting to dodge egregious taxes. Still, investors might reason, this joint effort to bring down taxes cannot do anything about everyone’s number one expense: skyrocketing fuel costs, even higher than that of taxes. Yet, Décurey says, he thinks he and partner airlines can do something about that; a united front of African airlines was successful in lowering fuel prices for a three-month trial period, after which Décurey says fuel prices have been extended and will stay lowered through 2014.

“This is just to illustrate that if it’s a combined effort you can reach a lot in getting down fuel prices, taxes, what have you,” he says. It is clear Décurey believes in a collaborative problem-solving approach as an across-the-board strategy for success. His diplomacy suggests it is inevitable that he and other airlines will eventually lobby regulators for smarter rules, when international competition becomes a consideration as the airline grows.

Already having reduced fuel prices in the Ivoirian commercial capital by 20 percent, Décurey does seem the best candidate to unify a country recovering from civil wars. “A unification of the country can only be done once the domestic network is started, as the country was basically divided in two. The new president and his government, they want to unify the country by bringing back industry into remote places,” he says.

Décurey’s efficient air route between Abidjan and remote Ivoirian areas means the start of many new business opportunities. “[Already, businesses] have come back to Abidjan because it is much nearer and much more to central to other places. … This is of course good for the image of the country but also for the industry and economy of Ivory Coast and particularly of Abidjan,” he says..

If 2014 proves to be a year of intense growth for Air Côte d’Ivoire as Décurey predicts, then West Africa will follow. The logical outcome is increased business throughout the region, and in that scenario of intense growth, the aviation industry gets a special privilege: playing the star role in the development of a nation. 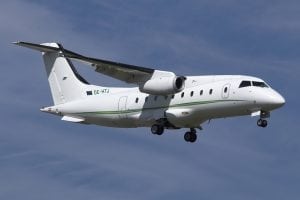