JHMCS II is a helmet mounted display (HMD) system designed for new aircraft installation and as an upgrade/enhancement for aircraft already equipped with JHMCS. It provides visor projected color video and symbology in a lightweight HMD in both day and night environments. There are two versions of the JHMCS II product line Digital JHMCS for those already equipped with HMDs and JHMCS II for new HMD installs. According to the company, Digital JHMCS II is a “plug and play” upgrade solution for the more than 6,000 JHMCS already delivered. JHMCS II provides a new optical-inertial tracker and replaces the JHMCS subsystems with a Aircraft Interface Unit. Visit www.JHMCSII.com.

According to the company, users can tailor their experience by adding company logos, customizing place names, selecting up to six languages and accessing high-resolution city maps.

The new features are available through the iTunes App Store as a first-time download or as an Airshow Moving Map app update. Existing Airshow 4000 or Venue HD cabin management system users can take advantage of the new app update with a system upgrade from a Rockwell Collins authorized dealer, according to the company. Visit www.rockwellcollins.com.

Jeppesen introduced new features and functionality for its FlitePlan Online for business aviation operators. The new features enhance operational efficiency and simplify the overall flight planning process through a Web-based system, according to the company.

Curtiss-Wright Controls Defense Solutions introduced the Skyquest AVDU3000, a 12.1-inch, rugged LCD display that provides 1280x800 resolution. It features control and video handling capabilities designed for the unique demands of airborne defense and law enforcement applications, such as surveillance, patrol and search and rescue, according to the company.

The display features hard bezel keys for core controls such as power and brightness. The bezel buttons are supplemented with a configurable touchscreen interface that can be user-customized for functions such as video recorder control. For surveillance and navigation applications, the AVDU3000 supports optional glove-operable touchscreen control of functions such as digital moving maps. Visit www.cwcdefense.com.

The connectors come in three standard contact layouts: 3, 6 and 9 way. Each mated half of the connector can be configured with either male or female contacts, doubling the keying configurations available and electrically protecting contacts on the powered-side of a system.

The connectors are fully sealed for use in areas with high levels of moisture and are manufactured from high-performance composite materials which are designed to help meet the low smoke, toxicity and flammability requirements of the aerospace industry, the company said. Visit www.TE.com.

Positronic, of Springfield, Mo., released an ARINC 801-compliant fiber optic terminus and size 8 adapter for use with its Combo-D connector family.

The Optik-D terminus has an optical insertion loss of 0.06 dB (typical) and a return loss in excess of 45 dB for multi-mode. It integrates a high performing optical terminus with a low cost connector housing, according to the company. This connector system also offers the flexibility to mix optical connections with traditional power, signal, coax and high-voltage contacts. Visit www.connectpositronic.com.

North Hills Signal Processing Corp., based in Syosset, N.Y., introduced the DBT300 hand-held tester. The new, enhanced tester expands the functionality of the previous tester with a minimal increase in size and weight, according to the company. The DBT300 performs all the tests done by the older generation systems plus adds features that measure Return Loss and Insertion Loss.

Garmin, based in Olathe, Kan., received several new international validations including approval in Europe for the King Air 300/350 G1000 upgrade as well as the more recent software enhancements for the GTN 750 and 650 series in Europe, Canada, and Brazil.

Sabena Technics has extended its 20-year global repair and overhaul affiliation with Honeywell by becoming a Honeywell MRO network partner for the company’s air transport customers.

Sabena said the contract builds on Sabena Technics’ existing accreditation with Honeywell as a parts and repair supplier. Under this agreement customers requiring servicing of Honeywell products have access to original Honeywell spares through Sabena Technics. Visit www.sabenatechnics.com.

SEA Wire and Cable received approval from Naval Air Command to manufacture products in accordance with WC 27500-2012. The approval applies to all products produced in the Madison, Ala., facility for groups 1, 6, 8, 10 and 12.Visit www.sea-wire.com.

With its 480 computing cores, Kontron’s OpenVPX-compliant board delivers a parallel data processing performance of up to 576 GFLOPs. It is optimized for compute-intense General Purpose Graphics Processing Unit (GPGPU) applications deployed in avionics and military technology which require superior situational awareness. According to the company, size, weight, power and cooling-critical applications benefit from the board’s lightweight construction, along with minimal power consumption of 35 watts, plus conduction cooling, withstanding extreme temperatures of -40°C to +85°C. Visit www.kontron.com.

The ADS600-B meets the FAA’s 2020 mandate for ADS-B equipage. The ADS600-B sends ADS-B Out information and receives ADS-B In information including ADS-B, ADS-R and TIS-B traffic and FIS-B weather. It supports a variety of panel-mounted EFIS, MFD and portable displays.

Options include an ARINC 429 interface; a Wi-Fi adapter; and an internal TSO-C145c WAAS GPS from Accord Technology. Visit www.navworx.com.

Landmark Aviation launched an upgraded version of its mobile application, Connect 2 Landmark. The app is currently available for Android and Apple devices. The upgraded app allows customers to lookup detailed information about Landmark’s FBO services, and enables customers to view MRO offerings and the current charter fleet, and allows them to request a charter quote. Visit www.landmarkaviation.com.

The system provides full ADS-B In and ADS-B Out capability, with a high integrity WAAS/GPS in a single box. Using the RANGR FDL-978-XVR, pilots can receive TIS-B and FIS-B uplinks, giving them access to traffic, graphical weather and other data displayed on a compatible MFD or iPad via our Wi-Fi module as well as being fully compliant with the upcoming ADS-B equipage mandate, according to the company. 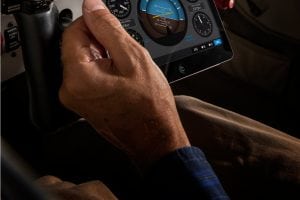 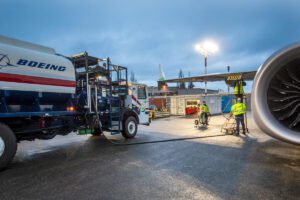