A research report released Monday predicts Ka-band connectivity for in-flight applications will hit 6,000 by 2020. According to the latest findings from IMS Research, Ku-band will be the most popular technology at the end of 2015; with Ka-band becoming the market leader by 2020.

Of the predicted 15,300 connected aircraft at the end of 2021, it is projected that 39 percent will utilize Ka-band, compared with 28 percent which employ Ku-band, providing a significant change in the landscape compared to the end of 2016, when Ku-band is forecast to represent 36 percent of all connected aircraft, with just 12 percent offering Ka-band, according to the report. Ku-band is currently supported by Panasonic Avionics, Row 44 and Gogo, whereas Ka-band has attracted LiveTV, OnAir and, again, Gogo.

“With more aircraft now offering Wi-Fi, passenger awareness is rapidly increasing. Despite the challenges and costs associated with providing Internet connectivity at 36,000ft and 500mph, we’re already seeing passengers expecting a similar service to that which they can experience on the ground in coffee shops, shopping centers and so on – that is, fast and free," said Heath Lockett, aerospace analyst at IMS Research. “Much has been made of the rivalry between companies offering Ku- and Ka-band options, however, there is more than enough room in the industry for both technologies to co-exist. Every airline has a slightly different requirement for their connectivity solution – the requirements can even be wildly different across a single airline’s fleet. Those different approaches will ensure that all technology solutions will continue to exist well into the next decade. Who knows, by then the industry buzz may be focused on S-band, or even Q-band.”

According to the report, the market for in-flight connectivity has been most quickly and successfully addressed by Gogo’s air-to-ground (ATG) service in the United States, with the provider now planning to expand the service to Canada after regulators in the country paved the way for expansion. Thanks, in part, to the low-cost and quick installation procedure, Gogo-enabled aircraft will total more than 1,700 at the end of 2012, representing more than 70 percent of all connected aircraft. Such has been the rapid ascent of ATG, the technology is forecast to lead the market, in terms of installed base, until 2015.

However, although Gogo is currently upgrading its network to offer improved bandwidth, it faces tough competition from satellite-based solutions, chiefly because of their ability to offer a global service. Indeed, Gogo will shortly install its first Ku-band product and has also signed up to support Inmarsat’s Ka-band Global Xpress service. L-band technology was the first to see success given its use onboard aircraft for cockpit critical communications. Although L-band is predicted to remain key for cellular communications, and despite advances which have offered greater bandwidth (the latest boosting bandwidth to 700kbps per channel), it is Ku- and Ka-band which are predicted to dominate in the next decade where Wi-Fi connectivity is present. 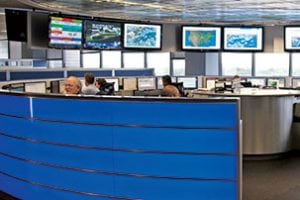