GE Aviation acquired Austin Digital, a privately owned, Texas-based supplier of flight operations data analysis, which is designed to “strengthen GE’s services offerings with integrated solutions for aviation customers around the world,” the company said. Financial terms of the acquisition were not disclosed.

Austin Digital, which employs about 40 people at its Austin, Texas, headquarters, specializes in facilitating Flight Operational Quality Assurance (FOQA) for airlines and business jet operators. ADI uses a proprietary suite of tools to analyze digital flight data and other operational data to improve safety and efficiency for operators.

“GE is committed to delivering solutions that help our customers operate aircraft more efficiently, with reduced environmental impact,” said Paul McElhinney, president and CEO, GE Aviation Services. “The acquisition of Austin Digital brings some of the best flight operations technology to GE Aviation’s Services business, further expanding our commitment to deliver results for our customers. We are delighted that Austin Digital is joining our team today.”

“This is great news for Austin Digital employees and our customers,” said Austin Digital CEO Thom Mayer. “Customers will continue to benefit from the same expertise and service for which Austin Digital is known, while the strength of GE provides a platform for future innovation and growth.”

Astronics will acquire privately held Max-Viz, a developer and designer of Enhanced Vision Systems (EVS) for fixed and rotary wing aircraft, for $10 million in cash, the company said in late July. Additional purchase consideration of up to $8 million may be paid by Astronics if Max-Viz achieves certain revenue targets in 2013, 2014 and 2015.

“They are a leading provider of EVS technology having earned FAA certification for installation on more than 200 different fixed-wing and rotary-wing aircraft models across various manufacturers. We expect that Max-Viz will continue its growth through innovation, quality and its solid pipeline of opportunities.”

Founded in 2001 in Portland, Ore., Max-Viz had 2011 revenue of $5.4 million and backlog of $3 million at the end of 2011, and is projecting 2012 full-year revenue in the range of $7 million to $8 million. Max-Viz’s EVS product line fuses infrared and visible imagery allowing real-time display to pilots for increased visibility in adverse weather conditions, such as darkness, precipitation, fog, dust and smoke.

Thales completed the sale of its civil fixed-wing flight simulation business to L-3 Communications for about $130 million, the company said in August.

The U.K.-based Thales said it will continue to develop its simulation and training business for military and government markets, as well as rotary-wing aircraft for civil and military markets.

L-3 said it intends to continue to operate the fixed-wing flight simulation business from the Thales facility in England.

The two companies have also agreed on a partnership to secure the supply chain of civil components that Thales may require in the future for its military business activities.

“Thales will continue to develop its military simulation system capabilities, which will remain part of our key product portfolio. We feel that L-3 Communications Link Simulation and Training U.K. Ltd will be well positioned to maximize the potential of the civil simulation business,” said Marion Broughton, head of Thales U.K.’s aerospace business.

The upgrades will include systems engineering and integration, software and electronics engineering, obsolescence management and logistics support, BAE said. The work will be performed through a contract with the U.S. Department of Defense Foreign Military Sales program.

BAE did not disclose the financial terms of the contract, but the company estimates that the total estimated addressable market for F-16 avionics upgrades is valued at greater than $3 billion for more than 3,000 F-16 aircraft globally.

“This is a strategic international win for us, significantly expanding our aircraft upgrade and modification business,” said Dave Herr, president of BAE Systems Support Solutions. “We have extensive capabilities that span across BAE Systems, and I am confident that our team offers the best value to the customer.”

The avionics upgrade package will include the commercial fire control computer, which has the highest throughput of any mission computer designed for an F-16, according to BAE.

“This selection further demonstrates that we are a leading provider of integration, avionics and mission computers for F-16s, and we will continue to offer our capability to customers across the globe,” said Gordon Eldridge, vice president and general manager of BAE Support Solutions.

The test flight occurred at an Insitu facility in Oregon as part of the 27-month engineering, manufacturing and development (EMD) phase of the U.S. Navy and U.S. Marine Corps Small Tactical Unmanned Aircraft System (STUAS) Integrator program. The STUAS was awarded to Insitu in 2010, and Marines are currently training with the Integrator UAS, the modular version of the RQ-21A which was specifically designed for testing.

“The government-industry team that achieved the successful first flight of RQ-21A is absolutely dedicated to delivering the best technology to the warfighter,” said Ryan Hartman, senior vice president of Integrator programs at Insitu.

The Navy will consider purchasing a low-rate initial production version of the RQ-21A at the end of the EMD phase.

The RQ-21A weighs 135 lbs., a significant weight increase over the Insitu ScanEagle UAS, which was used extensively in the wars in Afghanistan and Iraq. Insitu said the RQ-21A builds off the ScanEagle design principles.

“First flight of the RQ-21A marks the start of a very fast paced integrated Developmental & Operational test period, which begins at NAS China Lake later this month. The Insitu/Government team is very excited and motivated to deliver the first expeditionary, multi-intelligence UAS to the Navy and Marine Corps in this class. The organic ISR capability this UAS will provide to the Marine Air Ground Task Force will be a huge enabler for our Marine Expeditionary Units and the Navy & Marine Corps team afloat,” said Col. James E. Rector, program manager for USMC.

The TSAA program includes the prototyping and demonstration of functional hardware, along with the drafting of the industry standards for conflict detection and alerting to be adopted by ADS-B vendors, Avidyne, based in Lincoln, Mass., said.

Initial TSAA research, application development and simulations were completed in 2011, and flight tests and refinements are being accomplished throughout 2012. New minimum operational performance standards (MOPS) will be defined in the second half of 2013 and the new Technical Standard Order is expected to be published and available for all manufacturers soon after that. Airbus on Aug. 2 powered up the XWB MSN1 flight deck for the first time for electrical testing on its A350 passenger jet.

The France-based airframe manufacturer’s XWB flight deck has six interchangeable displays. The initial application of electrical power to the aircraft’s front fuselage occurred nearly a year prior to the first scheduled flight test in the summer 2013 for the A350.

Airbus recently delayed the initial A350 flight testing due to delays in building the composite wing for the aircraft.

“The power-on acts as a dry-run for the ground tests that will take place later on the complete aircraft,” Martin Fendt, a spokesman for Airbus, told Avionics Magazine. “This allows us to check the quality and completeness of the nose fuselage.”

Airbus expects to achieve the power-on of the entire A350 fuselage later this year.

The X-48C is a scale model of a heavy-lift airplane with a 240-foot wingspan that Boeing said could be developed in the next 20 years for aerial refueling and other military applications. Boeing is working to develop the X-48C with NASA, Cranfield Aerospace and U.S. Air Force Research Laboratory. The remotely piloted plane is a triangular aircraft that blends the wings with the body.

“Working with NASA, we are very pleased to enter into the next flight-test phase of our work to explore and validate the aerodynamic characteristics and efficiencies of the Blended Wing Body concept,” said Bob Liebeck, a senior technical fellow at Boeing.

The X-48C is a modified version of the X-48B, which was tested at NASA’s Dryden Flight Research Center between 2007 and 2010. Boeing equipped the X-48C with two 89-pound thrust turbojet engines, which differs from the three 50-pound thrust engines on the B-model. The development team’s goal with the C model was to create an airframe noise-shielding configuration that is more fuel-efficient than the B model.

“In our earlier flight testing of the X-48B, we proved that a BWB aircraft can be controlled as effectively as a conventional tube-and-wing aircraft during takeoffs and landings and other low-speed segments of the flight regime,” said Liebeck. “With the X-48C, we will be evaluating the impact of noise shielding concepts on low-speed flight characteristics.” 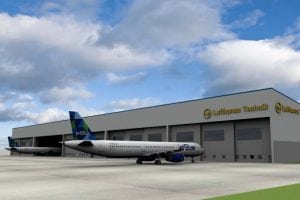 Spirit, JetBlue Ready to Move A320 Maintenance to Puerto Rico

Insitu Adds Inceptor to Its Line of UAS