Unmanned aircraft systems (UAS) manufacturers, government officials and major aerospace company executives were focused on the future of the unmanned industry, and the safe integration of UAS into the National Airspace System (NAS) at the Association for Unmanned Vehicle Systems International's (AUVSI) Unmanned Systems 2013 conference. Military commanders shared updates on some of the latest UAS from companies such as Northrop Grumman and Insitu, while industry groups addressed privacy concerns from lawmakers and civil liberty groups as the United States prepares to integrate remotely piloted aircraft into civil airspace.
Several big announcements came during the show, including from manager of FAA's UAS integration office, Jim Williams, who said the agency will release its draft regulation governing the operation of small UAS by the end of the year.
Williams said the process of integrating UAS into the NAS will require more government-industry collaboration.
"We didn't reach out to Insitu and AeroVironment and say 'oh please please come do a certification,' they had to take the initiative to come to the FAA and ask for approval. Conoco Phillips had to say 'we'll take the responsibility, we'll be the operator," said Williams. "The process moves forward when companies come and present their equipment for approval, and operators come and want to present their process for how they're going to operate safely with that equipment. The process moves forward based on this industry pull to get approval to do operations."
FAA will allow more demonstrations for commercial UAS operations in the Arctic region next summer, though Williams could not provide specific details on what those operations would be.
UAS manufacturers made several announcements as well, including the introduction of a next generation variant of Northrop Grumman's Fire Scout unmanned helicopter and preparations from Insitu's RQ-21A flight tests this fall.
Several manufacturers expressed frustration with public scrutiny over privacy concerns as the U.S. prepares to integrate UAS into civil airspace over the next two years.
An anti-war group, Code Pink, took the issue of privacy concerns directly to AUVSI, staging a protest outside of the conference, voicing opposition to the military's use of UASs and the concept of integrating these aircraft into civil airspace.
"“The privacy part of it is a legal matter at the local, state and federal level. But we recognized that If together we don’t tackle that issue successfully, then the technological progress won’t matter," said John Porcari, deputy secretary of the Department of Transportation during a speech on the second day of Unmanned Systems 2013.
–– The U.S. Navy will begin flight testing a new version of Northrop Grumman's Fire Scout unmanned helicopter in October, according to Capt. Patrick Smith, the Navy's Fire Scout program manager.
Smith held a media briefing on Wednesday, touting the new capabilities of the upgraded unmanned aircraft system (UAS).
Northrop has added more endurance and payload capacity to the MQ-8C, an upgraded variant of the existing MQ-8B Fire Scout, which has logged more than 10,000 flight hours since 2006. According to Smith, the Navy is working on adding a laser-guided rocket and an upgraded radar to the MQ-8C.
–– Boeing subsidiary Insitu's RQ-21A Integrator small tactical unmanned aircraft system (STUAS) is expected to begin initial operational test and evaluation (IOT&E) activity with the U.S. Marine Corps in late October. The modular design will enter service with an automatic identification system designed for maritime surveillance. Ryan Hartman, senior vice president of programs at Insitu, said the company has produced four new RQ-21As for use during IOT&E tests.
Insitu is also looking to increase civilian applications for its ScanEagle UAS, which recently received a restricted use commercial type certification from FAA to perform ice flow monitoring in the Arctic region.  "With the certification, now we can start to responsibly introduce UAVs into the national airspace," said Hartman.
According to Hartman, potential civilian uses include coastline surveillance for the U.S. Coast Guard.

The company is looking to improve the safety of UAS from a loss rate of once every 1,000 flight hours to once every 100,000 flight hours. For the Matrix program, Sikorsky has equipped an S-76 commercial helicopter with fly-by-wire controls to serve as a flying testbed for its autonomy initiative.

–– AeroVironment said a solar-powered version of its Puma AE small UAS completed a nine-hour flight test. The company is currently working with solar cell manufacturer Alta Devices on the development of the solar Puma. Officials from AeroVironment believe the solar version will lead to the development of small UAS that can be used for longer missions over greater distances.

–– Ewatt debuted Chinese manufactured UAS platforms for the first time on American soil, or anywhere outside of China for that matter, at Unmanned Systems 2013. The company's EWZ-S QuadCopter, EWZ-I unmanned helicopter, EWG-I fixed wing UAS and EWZ-120 unmanned helicopter are currently used by the Chinese government to perform inspections of power grids and oil pipelines. Ewatt is looking for international distributors of its aircraft, and garnered plenty of interest during the show, although they currently have no time table for obtaining type certificates of their UASs outside of China.

"I believe that China is going to be one of the leaders in the world for this type of technology, because of the freedom that they give us to work on this type of technology," said Dennis Fetters, a manager at Ewatt, and former owner of Revolution Helicopters.
"One of the reasons that I don't develop in the United States is because of all the regulations involved, and its only getting worse. China doesn't have those regulations, and we're free to develop and they encourage us to develop this technology," Fetters added. 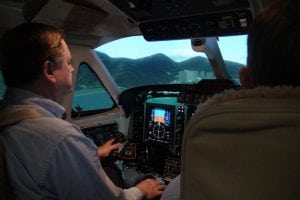