FAA safety officials are investigating a miscommunication between air traffic controllers (ATC) that lead to three aircraft flying too close to each other near Ronald Reagan Airport on Tuesday.

The incident occurred Tuesday afternoon when the miscommunication between two ATCs at Ronald Reagan and a manager at the Potomac Consolidated Terminal Radar Approach Control (TRACON) caused a "loss of the required separation between two regional jets (Chautauqua Airlines 3071 and Republic Airlines 3467) departing from Runway 1 and a regional jet (Republic Airlines 3329) inbound for Runway 19," FAA said in a statement.

At the time of the incident, controllers were changing the direction for planes landing and taking off at Reagan National because of severe weather conditions.

Commercial aircraft are required to remain separated by 1,000 vertical feet and 3.5 lateral miles, and the landing plane came within 800 vertical fleet of the two outbound jets.

"At no point were the three aircraft on a head-to-head course. They were not on a collision course,” said Acting FAA Administrator Michael Huerta. “The two departing aircraft came within these margins in relation to a plane that was landing. But, at no point were any of the planes headed directly for one another."

In a statement FAA said it "will take appropriate action to address the miscommunication."

"There was a loss of separation – it shouldn’t have happened. But a well-trained controller at the DCA tower immediately recognized the situation and worked quickly to fix it," said Transportation Secretary Ray LaHood. "The planes landed safely at their intended destinations." 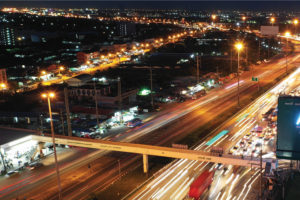