Wireless in-flight entertainment (IFE) is expected to reach a global install-base of nearly 9,000 aircraft by 2021, roughly a third of the global fleet, according to a report by IMS Research.

The major U.S.-based carriers in recent months have announced plans to outfit their fleets with connectivity services, whether satellite or air-to-ground. This connectivity can complement the traditional in-flight entertainment seatback displays. For airlines, connectivity systems can represent potential ancillary revenue streams. For passengers, the desire to be connected at all times, including onboard an airplane, is driving many of the airline installs.

“In-flight Wi-Fi and cellular communication is becoming increasingly common, particularly in the U.S., and today thousands of aircraft are fitted with equipment that allows passengers to connect to the Internet,” says Alastair Hayfield, research director, IMS Research.

Unlike traditional seatback displays, connectivity systems are lighter and less complicated; passengers use laptops, smartphones, tablets, etc., to view their own content, while airlines simply provide the network.

“Some airlines will continue with seatback displays because it provides a reliable, proven means of displaying content. However, if wireless IFE systems prove popular and reliable, then airlines that have committed to seatback systems at the moment may change their minds,” he added.
At the same time, the transition toward airlines becoming connectivity providers instead of content providers to driving some changes to the players in the market, according to IMS researchers.

“Wireless IFE is giving smaller, new technology players the chance to enter the IFE market. This could significantly change the experience for passengers in terms of the services offered, but the change is likely to be gradual rather than revolutionary. Remember, the IFE hardware market is currently dominated by a small number of large players,” he said.

The IMS report is based on two approaches — interviews with the relevant hardware suppliers, airlines and communications companies about the market and a survey of 50 major airlines.

According to the report, airlines said the main attraction to wireless IFE is the ability to offer a new service to customers. Secondarily, airlines cited the “newness” of the technology, referred to as the “me-too” syndrome by the IMS researchers. Cost and business-case issues ranked highest as the airlines’ main concern about these systems.

“The inevitable take-off of wireless IFE has clear benefits to both the industry and passengers alike,” Hayfield adds. “Until very recently we have all been cut-off from the outside world when flying, dependent on a limited program of entertainment, or reliant upon our own media. But very soon we will all be able to access not only online content, but be able to communicate with family, friends and colleagues, keep tabs on on-going travel plans — anticipate and contingency-plan around potentially missed flights or delays.” 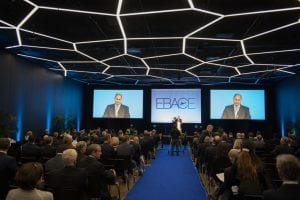