OnAir said it has enabled Wi-Fi connectivity across Emirate Airlines' fleet of 21 A380s, the world’s largest A380 fleet. OnAir’s inflight GSM mobile phone network will be deployed on the Emirates A380s from July this year, the first time the combined GSM mobile phone and WiFi service will be available on A380s, the company said.

“Emirates pride itself on providing a premier in-flight experience and, for us, this includes connectivity for our passengers," said Patrick Brannelly, Emirates vice president corporate communications product, publishing, digital and events. “We have had excellent passenger feedback about the OnAir Wi-Fi service and look forward to more of the same from the mobile phone service.”

Internet OnAir has now been on over 5,000 Emirates A380 flights, initially as a trial before the formal service launch at the end of 2011. With average data usage per user slightly below 20MB, the SwiftBroadband-based service has proved capable of handling demand.

“We have taken two key learnings from the Internet OnAir service on Emirates’ A380s so far,” said Ian Dawkins, CEO of OnAir. “The first and more obvious is that in-flight connectivity is here to stay. The second is that we can meet passengers’ requirements, even on the largest aircraft, with our SwiftBroadband service. Not only does it have the right capacity at the right cost, but also, combined with our network of regulatory authorisations and roaming agreements, we provide consistent global coverage.”

The bulk of usage is focused on social media, news and travel related sites, such as hotel, taxi and restaurant bookings, with passengers typically using the Internet during the first half of the flight.

There is an even split between the type of device passenger use to access the Internet, with 48% using a laptop or tablet and 52% using a smartphone.

OnAir’s inflight connectivity services have now been selected by six A380 operators and are currently in service on 25 A380s, as well as being available as linefit and retrofit on a wide range of Airbus and Boeing aircraft. 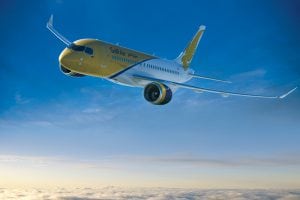