Universal Avionics Systems, based in Tucson, Ariz., promoted Michelle James to director of marketing and communications. She will be responsible for all of the company’s advertising and campaigns, as well as exhibit and convention activities.

James has been with Universal Avionics for more than 10 years, starting as a document control specialist and working up to her most recent position as relationship marketing manager for the company’s marketing division.

SEA Wire and Cable, a wire and cable distribution company based in Madison, Ala., promoted Marty Clark to president and chief operating officer. He will be responsible for the strategic direction and daily operations for SEA.

Clark joined SEA more than 20 years ago in an entry level warehouse position and has moved up through sales and operations positions before becoming general manager, a position he has held for the last seven years.

StandardAero, based in Tempe, Ariz., appointed Jeffrey Wood senior vice president of its Airlines and Fleets business, the largest of the company’s six business sectors.

Wood has more than 24 years experience at a variety of companies including GE, Pratt & Whitney Commercial Engines and Teleflex. Most recently, Wood was a senior advisor for Irving Place Capital, focusing on investment opportunities for the firm’s aerospace practice.

STG Aerospace, of Swaffham, Norfolk, U.K., appointed Richard Moore chief executive. He replaces Peter Stokes who is stepping down from the position.

Moore comes to STG from the aerospace products business. He has held senior management positions with Thales, Honeywell, two Rolls Royce joint venture companies and most recently at Medaire where he was chief executive.

Lockheed Martin appointed Bernard McCullough vice president of Business Strategy for its Mission Systems and Sensors business. MS2, based in Washington, D.C., is part of the Electronic Systems business area and has 14,000 employees, primarily based in the United States, Canada and Australia.

McCullough joins Lockheed Martin after serving more than 36 years in the U.S. Navy.

Shaver most recently was with Delta Air Lines. During her time there, she served as manager, flight control, cargo revenue management; manager, compliance and Operations Control Center Support, Cargo Operations; and, most recently, as manager, Customs and Facilitation, Corporate Security.

Prior to Delta, Shaver worked both domestically and internationally as a policy analyst, editor, operations agent and cargo call center manager.

Gulfstream Aerospace, based in Savannah, Ga., made a series of division management moves.

The company promoted Troy Miller regional vice president, Military and Special Mission Sales, based at the company’s Washington, D.C., office. Most recently, Miller was a Gulfstream V pilot for Corporate Jets, an aircraft charter, management and sales company based in Van Nuys, Calif. Prior to his commercial flying position, he had a 20-year career in the U.S. Air Force. 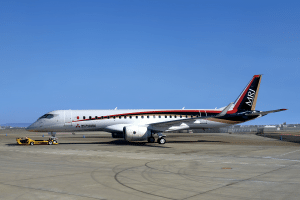