One of the biggest buzzwords around the aviation industry right now is biofuel, a movement which promises to allow operators to fly cleaner, more efficiently, and maybe even less expensively by using corn-, plant- or oil-based fuels as an alternative to conventional petroleum jet fuel.

In recent months, Honeywell, Gulfstream, Boeing and others have all had splashy announcements of aircraft powered by a cocktail of fossil fuels and oil that may have been used to cook a French fry in a previous life. Companies have pumped millions of dollars in recent years into research and development of these fuels. In early November, Alaska Airlines announced it will fly 75 commercial passenger flights in the United States powered by a 20 percent blend of sustainable biofuel made from used cooking oil. Alaska Airlines and its sister carrier, Horizon Air, will continue to operate select flights between Seattle, Washington, D.C., and Portland, Ore. On the same day, United Airlines said its subsidiary Continental Airlines will operate a biofuel-powered flight, departing from Houston’s Bush Intercontinental Airport en route to Chicago O’Hare International Airport. Also in November, an Air China-owned Boeing 747-700 flew a two-hour mainland flight from Beijing International Airport, fueled by more than 10 tons of biofuel, a 50-50 mixture of petroleum-derived jet fuel (Jet A-1) and fuel excogitated out of jatropha seeds, a Brazilian-based plant resistant of drought and pests containing about 27 percent to 40 percent oil.

It makes for good headlines, of course, to promote the use of renewable and efficient resources to power aircraft. After all, air travel is forecasted to rise, our unhealthy addiction to foreign oil is well documented and we Americans do so love our French fries, so it seems using biofuels for aircraft makes a lot of sense.

“This is a historic week for U.S. aviation. The 75 flights that Alaska Airlines and Horizon Air will fly over the next few weeks reflect our long-standing commitment to environmental responsibility and our belief that sustainable biofuels are key to aviation’s future,” Alaska Air Group Chairman and CEO Bill Ayer said. “Commercial airplanes are equipped and ready for biofuels. They will enable us to fly cleaner, foster job growth in a new industry and can insulate airlines from the volatile price swings of conventional fuel to help make air travel more economical. What we need is an adequate, affordable and sustainable supply. To the biofuels industry, we say: If you build it, we will buy it.”

Honeywell, Gulfstream, Boeing and others have had announcements of aircraft powered by a cocktail of fossil fuels and oil that may have been used to cook a French fry in a previous life.

Alaska Air Group estimates the biofuel blend it is using will reduce greenhouse gas emissions by an estimated 10 percent, or 134 metric tons, the equivalent of taking 26 cars off the road for a year. If the company powered all of its flights with a 20 percent biofuel blend for one year, the annual emissions savings would represent the equivalent of taking nearly 64,000 cars off the road or providing electricity to 28,000 homes.

Historical significance notwithstanding, I’m skeptical. Don’t misunderstand, I’m all for green initiatives — I recycle, I reduce waste when possible and I teach my kids to be responsible inhabitants of the earth. And I think the aviation industry is right to make environmental responsibility part of its business plan. But it’ll take a lot of time for me to get used to the idea that a commercial aircraft can be powered by something that McDonald’s was throwing out. It’s one thing when biofuels are powering a car; if the car breaks down, you pull to the side of the road and call AAA. There’s no AAA for airplanes; a mechanical problem on an aircraft, especially in mid-air, is a huge, potentially catastrophic deal. I don’t believe airlines or the FAA would allow or engage in these operations if it wasn’t totally and completely safe. And these Alaska Airlines flights flew without incident, but I remain uneasy about the potential.

I know that any biofuel approved for use by commercial aviation, by definition, has been found to be essentially identical to petroleum-derived jet fuel. But I can’t promise that if an airplane I board smells like French fries that I won’t be a little jumpy. 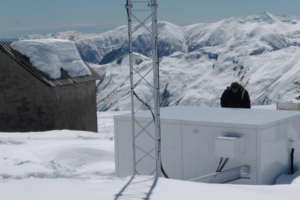