British Airways Avionic Engineering (BAAE), in Cardiff, Wales, is located not far from the carrier's major engine maintenance facility, a unit that was sold to outside interests as part of a reorganization move. This positioning illustrates the two primary maintenance, repair and overhaul (MRO) strategies open to airlines in these straitened times: make your own facilities as efficient as possible and do your MRO operations there, or outsource the work to specialists who enjoy economies of scale by working on several fleets. For its avionics, BA has chosen the former course and for its engines, the latter. Airlines adopting the in-house option can spread their overhead and augment revenue by taking on third-party work. And this BAAE has done.

Wholly owned by British Airways, BAAE moved from Heathrow airport 10 years ago to cut costs and gain space. Cardiff was selected for a new purpose-built facility because it offered adequate, affordable building space, a good local infrastructure, and a pool of engineering skill built up over a generation by Japanese and other consumer electrical/electronics companies that had chosen Wales as a bridgehead into the UK market.

Today a 142,000-square-foot (13,192-m2) facility nestles in a valley at Pontyclun, just outside Cardiff, on a site that leaves room for future expansion. A work force of 285 turns over ï¿½31 million ($55.6 million) annually, carrying out some 72,000 repairs a year on items produced by some 200 original equipment manufacturers (OEMs). The center operates as a self-contained business and is modestly profitable.

Four-fifths of BAAE's work (by revenue) is associated with the parent airline's fleet, currently comprising some 42 Boeing 737s, 58 B747s, 14 B757s, 18 B767s, 43 B777s, 33 Airbus A319s and 24 A320s. (More Airbuses are on order.) The remaining revenue comes from other airlines, such as Virgin Atlantic and Monarch, and from avionics work for MRO specialists like FLS Aerospace and Marshall Aerospace.

BAAE's test and repair work ranges from analog systems on early B737s and other Boeing classics--plus Lockheed Tri-stars, which are no longer in the BA fleet--to the software-intensive fly-by-wire, "glass" technology used today. BAAE has expanded its capability as BA has extended its fleet, adding the B777 to its portfolio and then introducing Airbuses for short-haul services. After its subsidiary airline, BA City Express, acquired almost 30 Embraer ERJ 145s, the Pontyclun facility augmented its regional jet capability.

BAAE general manager Rob Pendle admits his definition of avionics is broad. In addition to the usual flight deck systems for navigation, communication, collision and terrain avoidance, and instrumentation, his organization deals with equipment for the galley and cabin, including passenger entertainment systems and test equipment. Pendle deliberately targeted commercial items like headsets, defibrillators, cabin sales computers and lights, since these offer a high-volume, low-tech stream of work that is minimally subject to airworthiness regulations and involves only modest set-up costs. So significant has this type of maintenance become that BAAE devotes one of three equal-sized, adjoining buildings at the Pontyclun site to such items, along with motors, actuators and wiring harnesses. The other buildings handle mainstream avionics and test equipment, respectively.

The style of operation at Cardiff has changed over the years. Originally driven by the maintenance needs of avionics on aircraft now referred to as "classics," the facility had a high repair load and required a large spares inventory. The advent of newer aircraft with more reliable equipment, however, has progressively reduced the flow of hardware through the shops and, despite a hike in software support, decreased overall workload.

This decrease was exacerbated by the air transport recession, the aftermath of 9/11 and competition. The number of employees has dropped from a peak of almost 400 to 285, while man-hours per year have fallen from 350,000 to some 270,000 today.

These numbers would have fallen further had not BAAE taken decisive steps to adjust to the business climate. Management calculated that to make existing business secure and win new contracts from outside, it would have to implement a stringent cost-cutting program. To provide a basis for planning, BA agreed that BAAE no longer would have to bid competitively for maintenance work and that the Cardiff facility could count on receiving all of the airline's avionics work. The workload was further bolstered by not renewing subcontracts with outside maintainers and channeling this work to Cardiff. BAAE had to meet rigorous cost and service improvement targets.

"For a start, we took a close look at what we had on our shelves," says Pendle. "Traditionally, it had always been a practice to store faulty units and to repair them as and when they were needed. As a result, we had accumulated a large stock of faulty items, which we decided to either sell or make serviceable. At the same time we took the opportunity to cut down substantially on our spares and to sell off those we no longer needed."

Thus, BAAE's inventory costs were reduced substantially. Another decision was to identify those items that operators considered absolutely vital, and to ensure the highest availability for them.

Another value-adding strategy has been to repair items that had been discarded and replaced. As one example, when a BAAE technician suggested rescuing trash compactor doors by drilling out and replacing a stainless steel pin, this saved buying the complete item, at almost $8,000, every time a compactor came in with a broken door. Similarly, repairing galley strip lights and snake lights on cabin seats saves thousands of dollars in replacements.

The compactor example illustrates how aware BAAE managers are that the shop floor is a rich repository of detailed knowledge. They engage engineers and technicians in improvement processes through a bonus scheme that rewards fruitful ideas. An open communications policy minimizes any "them and us" perceptions and encourages free interchange of ideas. Last year, in fact, Alan McDonald, director of engineering at British Airways, acknowledged that BAAE had turned in its best operational performance ever. Pendle attributes this success largely to teamwork and the open relationship that exists between employees and management.

"We're often held up within BA as an example of best practice in terms of labor relations," says Pendle.

Incentives are important, too. An earlier scheme based on profit sharing failed because it was perceived as relating to throughput, tempting individuals to concentrate on volume rather than quality. The present scheme, however, focuses on unit cost, an approach that motivates technicians to contribute cost-saving ideas rather than to simply maximize their output.

Ideas do not have to be rocket science. For instance, discoveries of original parts manufacturers have on occasion enabled BAAE to purchase those parts directly at sensible prices, avoiding the excessive markups sometimes applied by OEMs. Efforts also have been made to better control intake, with a particular focus on sub-rotable units, such as electronic cards.

These and other measures helped the company reduce its materials spending by some 14 percent last year, to its current level of about ï¿½11million ($19.7 million) annually. A further 10 percent reduction is targeted for this year. Because materials represent a major proportion of total MRO expenditure, these savings will have a significant impact on customer prices and the bottom line. Better control over subcontractors also has cut costs.

Among the metrics monitored on the shop floor and displayed graphically on the company's notice boards are turn times and levels of work in progress. Reducing these numbers has a direct effect on inventory costs and throughput.

Quality measures, however, are given equal prominence. BAAE seeks to cut the rate of early equipment removals by exploiting shop visits to enhance unit condition. This effort is on track to deliver a 10 percent reduction in removals this year. An aim of the (informal) total quality mission is to keep customer units flying longer.

Investment is carefully planned and limited to what is strictly necessary. However, facilities must evolve in line with the fleets, and in recent times, BA's acquisition of Boeing B777s, Airbus and Embraer aircraft created a need for new test systems, repair facilities and training. As a result, the company now has several multipurpose test rigs--some worth $1 million or more--from Rada Electronics Industries, EADS Test and Services, and Avtron, as well as more specialized test equipment, such as Boeing's ATS 182.

At the same time, engineers have become creative in avoiding expenditure. So, when a supplier quoted several thousand dollars for a unit to test controllers for beds used in premium class, in-house engineers developed an equivalent at a fraction of the cost. Special test rigs, including some for testing control surface motors and actuators, have been developed or refined in house.

BAAE also has developed flight simulation software and carries out test system software upgrades. It has in-house Faraday cages, an environmental test chamber, a Class-100 clean room, and an automatic part retrieval system that retrieves items from the warehouse and delivers them to technicians by air tube.

In addition, BAAE trains its own staff, when necessary. This includes OEM courses and structured, hands-on exposure to maintenance procedures. The company aims to have individuals who can handle most tasks, across several aircraft types and avionics families, within a given work area. These skills and an associated ability to handle maintenance in depth -- right down to Level 3 repairs on synchros and gear trains, as well as analog and digital circuit boards -- have helped secure BAAE's status as a repair station approved by FAA, the Civil Aviation Authority of China, and the Sultanate of Oman, as well as Joint Airworthiness Requirement (JAR) 145 and Japanese Civil Aviation Bureau approvals. The facility has European Aviation Safety Authority (EASA) 21 manufacturing approval and various OEM approvals.

BAAE also trades on an impressive set of design approvals, gathered over the years. These enable the rapid development and clearance of repair schemes without, in many cases, having to submit them for OEM approval. Another advantage over stand-alone maintainers is its close association with a leading airline. This keeps BAAE rooted in commercial reality, while providing the benefits of wide operational experience.

In today's difficult air transport environment, keeping work throughput roughly constant over the last three years represents a considerable achievement. BAAE has compensated for a reduction in the hours that its primary client has flown by winning more third-party work, lowering unit costs, carrying out more repairs in house, and setting up for new aircraft within the fleets of BA and its subsidiaries.

Diversification extends to mundane but low-capital tasks, such as repairing rollers for cargo pallets, and to items like galley equipment. This produces useful volumes of work that is less regulated than the repair of flight instruments, navigation systems, flight and air data computers, radio, radar and other mainstream avionics.

The reclamation of previously outsourced work has augmented workloads, as well. And, with more outsourcing contracts due to end soon, this trend can be expected to continue. BAAE also has started taking in overhaul work on mechanical components such as aspirators -- which inflate door emergency slide packs--and thrust reverser locking mechanisms.

Business development executive Gaynor Castle expects that BAAE's growing appeal to third-party operators, augmented by a planned increase in regional jet capability, will at least stabilize the work force at present levels. Should revenues and profit grow accordingly, BA's identification of avionics MRO as a key revenue stream will have proved well founded. 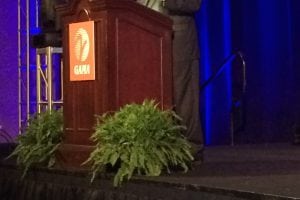