Wait a minute. WA-A-A-I-T A MINUTE! Do I really want to be some 12 inches from this conversation, trapped in my assigned seat on a six-hour flight from Washington to Los Angeles?

Technically, it could happen.

On this page in the November 2003 issue, I commented on the potential safety problem of electromagnetic interference (EMI) to critical avionics caused by transmitting personal electronic devices (T-PEDs), such as cell phones and notebook computers. Now we report, in this issue (page 37), that several entities are developing systems that allow airline passengers to use their T-PEDs throughout the flight, gate to gate, with no risk of EMI. Preparing for these systems' certification, RTCA Special Committee 202 is establishing guidelines for the use of T-PEDS on board aircraft. It just completed its Phase 1 assessment of current T-PED technologies; Phase 2 will assess the emerging systems designed to whip the EMI problem.

We note in this month's story that many airline passengers probably seek what might be described as the ultimate freedom in air travel: accessing e-mail, making phone calls, and generally conducting business while airborne as if at the office or at home. Unquestionably, the ability to pull out a notebook computer or personal digital assistant to access and send e-mail or conduct on-line research would be greatly beneficial. So, too, would be the ability to check voice-mail messages or make brief business calls on a cell phone.

But here is where the social issues regarding the onboard use of personal, wireless devices enter the picture. These issues are neither new nor easy to resolve. When all the technical and safety issues are settled, the airlines still must struggle to determine how T-PEDs, particularly cell phones, will impact the cabin workforce and the attitudes of passengers who seek relief from near constant connectivity, and consider cell phones to be intrusive, particularly when someone in an adjoining seat is using one. Many people see air travel as one of the last safe havens from workplace frenzy.

Such thinking has been noted before. Some 20 years ago, when seat-back phones entered aircraft cabins, CBS News anchorman Dan Rather mused over whether he "really wanted to be contacted at 35,000 feet." As it turned out, because of their exorbitant per-minute cost and, often, poor connections, seat-back phones never caught on, and Rather can still seek solitude at 35,000 feet.

But cell phones are a different matter. First, cell phones appear to be glued to people's ears. We see these wireless devices used in cars, stores and restaurants, and on the street. And second, as I reported in November, there were 150 million cell phone subscribers in the United States (that's three out of every four men, women and children) and 1.2 billion worldwide--and the number keeps growing.

How can airlines make both cell phone users and the seekers of solitude happy? I've heard of several suggestions, such as onboard "phone booths" and a separate cell phone user section in the cabin. An American Airlines official told me of possible phone use guidelines, in which a passenger's cell phone conversations could last no longer than, say, 10 minutes. But now, he added, you impose more work on the already busy flight attendants, who would have to adopt an even greater disciplinary role. The official noted that every day, among the about 250,000 passengers American transports during a 24-hour period, some passengers invariably have to be told to turn off their T-PEDs.

From contacting about a half dozen airlines, I found that all were looking at this new technology, and some have had systems demonstrated to them. United claims to be an "industry leader" on the topic because it worked with NASA on a study to determine T-PEDS' impact on avionics.

But all the airlines I contacted emphasized that they are noncommittal about equipping their fleets for T-PED use. Some airlines are conducting customer surveys; for example, British Airways is polling its Executive Club members. Many airlines have followed United's lead in allowing cell phone use while the aircraft taxi to the gate, and not just after the cabin door is open.

The technology that allows unlimited T-PED use on aircraft is coming, and it will be interesting to see how the airlines adapt. Southwest's view of these systems, though perhaps not representative, may reveal the current level of enthusiasm for the technology. "We're looking at these systems from various aspects," says a spokeswoman for the low-cost carrier. "But we see no urgency to installing them." 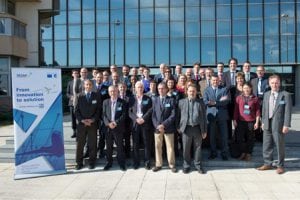