At the beginning of the 21st century, the aerospace industry faced serious challenges. Air traffic control (ATC) was approaching gridlock, tighter rules on noise and emissions were causing problems, the Europeans were challenging the United States in the global aerospace marketplace, and we were beginning to have difficulty attracting and retaining the work force.

Our association and others in government and industry agreed we needed a thorough assessment of the current state of the U.S. aerospace industry and its future with respect to the nation’s economic health and national security. In March 2001, at the Aerospace Industries Association’s (AIA’s) urging, Congress chartered a commission to conduct a study, with commissioners to be appointed by Congress and the president. I had the great honor of being appointed a member of the Commission on the Future of the U.S. Aerospace Industry by President George W. Bush.

After an intensive, year-long study, the commission in November 2002 issued a report to Congress and the administration, presenting a list of recommendations that would ensure U.S. aerospace leadership in the 21st century. The report framed the debate on aerospace issues and served as a reference point for policy makers. In the year since the report was issued, Congress has taken action on several commission recommendations. But a great deal more needs to be done.

Congress has agreed to:

The State Department also is close to implementing a system that allows industry to electronically transmit license applications and supporting technical data.

But the commission recommends other initiatives that need to be implemented. They are:

We think these issues are important to the economy, and AIA plans to contact each of the 2004 presidential candidates with a specific request for them to support these recommendations in the course of their campaigns.

The aerospace industry enables millions of Americans to work, travel and communicate dailywith speed and reliability. Directly and indirectly, our industry and its products generate some 9 percent of the nation’s economic activity and employ about 11 million people. It deserves a focused, White House-driven policy to expand recruiting, accelerate research and lower production costs.

In December 2003, the nation celebrated the 100th anniversary of powered, controlled flight and the astonishing achievements made in aviation and space over the last century. Today we make plans for breakthrough technologies in hundreds of aviation fields: engine noise and emissions, advanced avionics, ATC, homeland security and supersonic flight, to name just a few. And we look forward to promising years ahead for our dynamic and broad-reaching industry. 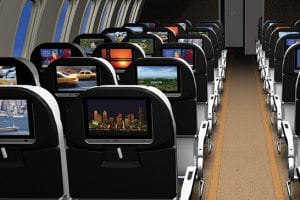