ï¿½Hillsboro Aviation, Hillsboro, Ore., performed the installation for the initial supplemental type certificate (STC) on its Bell 206B JetRanger. Additional models will be added to the STC, as up to 50 helicopters operating in southeast Alaska will be equipped with the FlightLogic system, courtesy of the Capstone program.

With 9/11, the Iraqi war and, hopefully, the severe acute respiratory syndrome (SARS) epidemic slowly fading into history, the world civil avionics market is set to enjoy a compound annual growth rate of 2.7 percent between 2002 and 2007. At least that's according to a recently completed forecast of the industry by Frost & Sullivan (F&S), the marketing analysis and consulting group in San Jose, Calif. F&S predicts growth in the following industry segments between 2002 and 2007:

The integrated avionics market will get a big boost because it is expanding into the general aviation segment, according to F&S. Garmin International, Avidyne and Chelton Flight Systems "are strongly positioned for rapid growth in thatï¿½ segment," says the F&S forecast.

The new, personal "minijet" market may _well give the avionics industry another shot in the arm, providing the cost, time, safety and reliability benefits can be demonstrated, the forecast adds. Other drivers of the avionics industry's predicted recovery are the following:

However, the F&S survey cautions that the air transport market is still recovering from multiple adversities, including the fact that more than 2,500 commercial aircraft remain in storage. _F&S also sees the fractional, business aircraft market flattening. And _it recognizes the uncertainties surrounding today's economy and the war on terrorism. Visit www.frost.com.

Rockwell Collins has entered into an agreement with Shimadzu Corp. of Kyoto, Japan, to jointly develop a projection display unit for the Mitsubishi/Boeing F-15J. Kaiser Electronics, a Collins business, will serve as lead in developing a 4.5-by-4.5-inch projection-based smart display. This is Collins' first international contract for projection display technology. Visit www.rockwellcollins.com.

Among the recommendations are that the program office ensure that the international industrial plan identifies current and potential contracts involving sensitive data and technology transfers to partner suppliers, evaluate the risks posed by possible adverse export decisions, and develop risk mitigations. The U.S. Defense Department concurred with these recommendations but raised the issue of affordability regarding the GAO suggestion of using U.S. suppliers as one way to mitigate exportability risks. Visit www.gao.gov.

The Automatic Air Collision Avoidance System (Auto ACAS), developed by a Lockheed Martin-led team, was recently demonstrated in a U.S. Air Force F-16. Designed to assure "last-ditch" collision avoidance, the system initially provides optimum escape maneuvers. If the pilot doesn't take action, it will execute the escape maneuver itself through the aircraft's electronic flight control system. Continually computing trajectories, the system gathers data either via data link from other Auto ACAS-equipped aircraft or, if nearby aircraft are not fitted with Auto ACAS, from an onboard sensor such as radar. Flight demonstrations were conducted at Edwards AFB, Calif., with assistance from NASA. The Lockheed team included Saab, Boeing, Veridian Engineering, Bihrle Applied Research, Raytheon and Smiths Aerospace. The program is funded and managed by the Air Force Research Laboratory and Forsvarets Materielverk of the Swedish defense establishment. Visit www.lockheedmartin.com.

IBM and Raytheon have signed a contract to collaborate in the design of custom semiconductors and systems for aerospace and defense industry customers. This new strategic relationship will leverage Raytheon's experience in defense and aerospace electronics and IBM's expertise in complementary areas such as chip design, software development, large systems computer architectures and network integration. As part of the joint effort, Raytheon is expected to be an IBM technology and intellectual property customer, which could be worth up to $100 million to the computer giant over the next five years. Visit www.ibm.com.

Racal Antennas Is Back

Chelton has acquired Thales Antennas, Southampton, England, from Thales Plc for $9.6 million. The purchased company has reverted back to its previous name, Racal Antennas. Visit www.racal-antennas.com.

China's Air Traffic Management Bureau has contracted Park Air Systems to establish 14 VHF communications facilities that will interconnect to the Guangzhou area control center, which serves the country's central and southern region. The contract is worth more than $4 million. Visit www.parkairsytems.com.

The automatic test equipment article in our August issue listed EADS test program sets for Boeing aircraft. The 14 items in the list actually represent only the EADS TPSs for Boeing-built avionics. The total rises to some 80 TPSs if all Boeing aircraft avionics systems are considered. 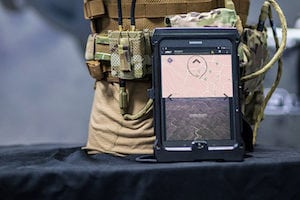