The Federal Aviation Administration has named James Altenbern the 2003 Avionics Maintenance Technician of the Year for the South Carolina district. He is employed at Stevens Aviation’s Greenville, S.C., facility. Altenbern joined the company in 1980 and has 31 years of experience as an avionics technician. Visit www.stevensaviation.com.

Art Taylor has joined Corporate Rotable & Supply Inc., Fort Lauderdale, Fla., where he is a technical sales representative on the company’s A3579-000 STC replacement generator for the Lear 35/36/55 aircraft. He is based in Columbus, Ohio. Taylor was an electrical technician for the U.S. Air Force for 23 years and for Learjet-Tucson for 10 years. Corporate Rotable & Supply is a parts and spares provider, serving the corporate aircraft market. Visit www.corporaterotable.com.

Emteq, the Muskego, Wis.-based producer of harness installation kits, recently appointed two new officials. Todd Lyda has been named vice president of business development. He is one of the company’s founders. In addition, Julie Raditz has been promoted to Emteq’s inside sales group, which supports the company’s customers and its business development team. She formerly held an order-entry position. Visit www.emteq.com.

Paul Muia has been named sales manager for Entela Inc.’s Canadian office, in Toronto. He formerly was program manager for the certification leadership team, with the Canadian Standards Association. Muia is a certified engineering technologist. Based in Grand Rapids, Mich., Entela provides engineering, testing and certification services. Visit www.entela.com.

Former Federal Aviation Administrator Jane Garvey has joined the Washington, D.C.-based public affairs and strategic communications firm, APCO Worldwide, where she has been appointed executive vice president and chairman of the company’s transportation practice. She also will serve as a lecturer and research scientist at Massachusetts Institute of Technology’s Center for Transportation and Logistics. Visit www.apcoworldwide.com.

Garrett Aviation Services has promoted Jeanette McGrath to director of marketing and Tony Checa to regional sales manager. McGrath has held various sales and marketing positions with Garrett’s parent company, General Electric, which she joined in 1987, and has been with Tempe, Ariz.-based Garrett since 2001. Checa has held various positions at Garrett since he joined the firm 1983. He began his aviation career as a mechanic with Warner Brothers. Visit www.garrettaviation.com.

As part of a transition plan, Jeppesen recently named Mark Van Tine president and chief operating officer. His new position was announced by Horst Bergmann, who was Jeppesen’s president and chief executive officer (CEO) but will serve as chairman and CEO until his retirement, on May 1. Bergmann has been with the company for 40 years. Van Tine formerly was executive vice president at Jeppesen. He began his career with Lockheed DataPlan in 1981 and joined Jeppesen eight years later. Van Tine is a private pilot and graduate of Harvard School of Business. Visit www.jeppesen.com. 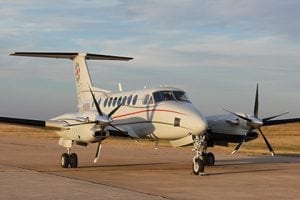