Once again the issue of ultra wideband (UWB) interference to avionics and other safety-of-life systems rears its controversial head. For more than a year, we’ve covered the Federal Communications Commission’s (FCC’s) ruling to allow the unrestricted use of some UWB devices. And we’ve alerted the aviation community of UWB’s possible signal interference to avionics, particularly to GPS.

A lot has happened over the past 12 months, not the least of which is the FCC ruling on Feb. 14. The ruling was meant to be a compromise, allowing the use of UWB technology in many applications yet protecting GPS signals–a major, though not total, concern of the aviation community. However, eager to promote UWB’s wider use, FCC said it intends to review the ruling in six to 12 months, perhaps to further relax limitations on UWB technology.

While many may have thought that the UWB issue would be closed on Feb. 14, clearly it is not. In fact, it has migrated to the U.S. Congress, where technological findings invariably take a backseat to political advantage. At a recent telecom subcommittee meeting, lawmakers accused the FCC of making the UWB ruling too restrictive. "I watched certain government bureaucrats and certain industries try their absolute best to stifle this new technology," postulated Rep. Billy Tauzin, (R-La.), chairman of the House Commerce Committee. Tauzin is not alone in Congress in supporting UWB’s unfettered use.

Be assured that other countries are eyeing the United States’ lead in UWB authorization and spectrum allocation. The International Telecommunications Union (ITU) has established study groups to look into UWB use, which certainly will be a topic at the World Radiocommunication Conference in August 2003 in Geneva. Given the commercial potential of UWB technology, particularly in wireless local area communications, we can be assured of pressure in the international arena to relax restrictions on UWB’s unlicensed use.

Why, if authorized UWB devices supposedly do not interfere with the GPS signal, should the aviation community be gravely concerned?

One reason is the results of recent NASA tests in Victorville, Calif. The agency was testing for interference from personal electronic devices (PEDs). During the final phase of tests, a UWB device was brought on board United Airlines B747 and B737 aircraft and, to the surprise of NASA researchers, the device "knocked out" the instrument landing system (ILS) of both aircraft. The same results occurred when the device was taken outside and positioned near the aircraft. And, at all times, the device’s power level for signal emission was set within the limits of the FCC ruling. The researchers were surprised again when they increased the power level and found that the device, which could be embedded in laptops and other types of PEDs, interfered with the traffic alert collision avoidance system (TCAS). NASA officials emphasize that the tests were preliminary and did not produce conclusive results. But the results at least prove that more testing is required.

The UWB issue really is a testing issue, in terms of how it is done and how much time is allowed to do it–and what motivates the testing. In preparation for the review of its ruling, FCC plans to conduct tests with the UWB signal at its labs in Columbia, Md. However, Ed Thomas, FCC’s chief, Office of Engineering and Technology, told Avionics Magazine that the tests will not involve aviation systems, and the test plans will not be made public in advance.

"It slows the process," says Thomas, of publicized test plans. "It would probably delay the testing by six months.

"We’re all professionals, and other agencies are free to conduct tests, as well," he adds. "We’ll file their results in the [review] proceedings."

Thomas contends that testing should consider UWB emissions in relation to the "noise floor," or ambient emissions coming from such items as garage door openers and baby monitors. "There is a strong indication–though very preliminary–that the noise floor could be significantly higher than the restrictions we’re putting on UWB."

Meanwhile, FCC places the burden of proving whether UWB signals cause harmful interference on those who use safety-of-life spectrum and not on the new users of the spectrum. This illogical policy could quickly spread throughout the world if the ITU accepts it.

Even this burden might be acceptable if sufficient time were allowed to conduct tests for UWB interference. But, in a rush to set loose UWB development, FCC allowed only six to 12 months for its review. Of course, says Thomas, commenting on the FCC review, "there is no indication that [the review] will be finalized at that time."

This offers faint reason for optimism–but Thomas probably is right. So long as agencies (all agencies), which invariably have agendas, conduct their own research, we can expect inconclusive, if not biased, test results. Independent evaluation is critical, not just because of biases, but because one agency often doesn’t understand the needs and concerns of another agency. For example, Thomas contends that the "uproar" surrounding UWB’s potential interference to avionics and other electronic systems is based on "assumptions of worst case-upon-worst case scenarios." But in aviation, all safety standards and rules are based on just that–worst case scenarios. This is why the motivation of testing is an issue and why the UWB interference issue undoubtedly will continue beyond the FCC review. 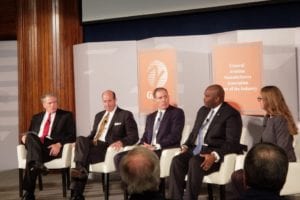 On-Demand Mobility: 'Important in Aviation as the Dawn of the Jet Age'