In my last column (April 2002, page 48), I noted the challenges in positioning radio antennas. Here are some additional thoughts on the subject. Take com-to-com interference, for example. Many newer radios have a cross-muting logic line to squelch off one radio’s receive audio when the other radio transmits. This vividly illustrates the nightmare radio frequency (RF) environment on board most airframes.

To operate properly, antennas must be separated on an aircraft, with shielding between them. Even with well-mounted antennas, closely spaced channels in the same band may interfere with each other. In helicopters installers also must deal with rotor modulation, which can compromise the matching and transmission path of top-mounted com antennas.

AM com radios normally output power in excess of 10 watts, or +40dBm (decibels relative to 1 milliwatt), and receive signals down to about 2ï¿½V(microvolts), or _-100dBm. The +140dB-wide dynamic range is why adjacent systems interfere with each other and how cable interference and RF coupling become a problem. Induced levels from other adjacent transmitters penetrate the operating range of the other receivers.

Near-field (within 1 wavelength of a transmitting antenna) interference can overwhelm the front ends of most transceivers and easily exceed the 60-80dB of unwanted signal rejection, which is a typical radio’s capacity. Local shielding between antennas therefore must be better than about 60-70dB for the radio’s internal rejection to work. This is no easy task; a few measurements with live signals will reveal that radio waves can penetrate almost anything and have many routes via windows, composite structures, wiring and door seams. The effects of mutual coupling are pronounced up to 5 wavelengths and are part of complex signal transitions that are not easily analyzed or quantified but are easily observed.

But onboard interference is only half the installation puzzle. How signals are received on the ground is the other critical half of an antenna’s performance. Generally, post-installation ground checks or tower checks in flight can show only a system’s close-in operation. They rarely show potential masking or site problems, which are concealed by the overwhelming signal strength in the two-way signal path.

Most flight crews must know how their radios will perform when they are 50 to 100 miles from a station and in all physical orientations. This performance also can be tested on the ground and in local flight. You even can use the test results as a site planning aid for future installations. In-flight testing is essential, however, to correctly assess operational conditions that include engine and free space elements. The performance of bottom-mounted antennas is dramatically different, particularly when airborne.

Here’s how you can test for the effect of two-way loss at distance. With a base station radio for checks, put a 30dB power attenuator on the output with a suitable power rating (Bird or Narda, rated 10 to 50 watts, as appropriate). Attach that output to a stepped attenuator, like an HP 355D, which has a 120dB range (10dB increments) and a 1-GHz top end. Connect the stepped attenuator output to a suitable antenna. You now can map radiation patterns around the aircraft, simply by varying the threshold of communication. It also simulates distance communication to the aircraft. You can dial in two-way system loss to 150dB, simulating extreme range, or rove around the aircraft, determining the radiation pattern’s evenness. You may discover severe lobe distortion or loss of communication from various quadrants or that your antenna is extremely inefficient.

With a swept antenna test (using a directional coupler and sweep generator) and some good data comparisons, you can arrive at the best sites and best antennas for an airframe, and reduce the system problems in flight. Unfortunately, airframe surface is limited, and multiple radio installations will lead to solutions that are intrinsically poor, but inevitable.

For the best results, you need to pick feedlines with as little loss as possible–increasingly important as frequency increases and critical by 800 MHz–and with the best shielding possible. Feedlines must be routed separately within the airframe to avoid mutual coupling and unintended interference with other systems.

Antenna sites should have adequate ground area (radius at least equal to height) and be located away from like systems and physical obstructions. Always keep antennas away from unshielded openings back into the aircraft. Here are site approaches and ideas to consider:

Use composite structures as carriers for planar antennas (such as plated copper foil). This might be good for emergency locator transmitter antennas, as there would be nothing to shear off in an accident.

Use matching baluns and other circuitry to fit monopole antennas more tolerantly to inadequate grounding situations._ï¿½Reduce VHF transmitter powers below 20 watts, probably to 10 to 12 watts. This reduces cable coupling effects but has minimal impact on range.

You can conduct some quick tests before installing a temporary antenna and ground plane to evaluate sites for possible mutual interference. Often the best sites require mechanical modifications and extensive certification work, but they may make the difference between a usable and unusable aircraft. 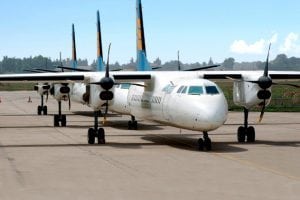 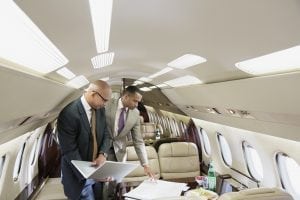