The Thomson-CSF name, which has been dominant in the aerospace arena since 1968, has been dropped for that of a mathematician and philosopher born around 624 B.C. The company now is named Thales (pronounced ta’les).

The name change, according to a Thales release, is to "give maximum visibility to the radical change that the group has experienced in recent years." Such change includes the acquisition of Racal in the UK and the realignment of the group around three clearly-defined business units and their corresponding markets: aerospace, defense, and information technology and services.

The new name was approved by Chairman and CEO Denis Ranque and the company’s management in early November. See www.thalesgroup.com.

BAE Systems Airbus UK selected Smiths Industries Aerospace to supply the fuel quantity indicating system (FQIS) for the A318. Valued at more than $15 million, the contract will be undertaken in conjunction with French work-sharing partner, Intertechnique.

The A318 is the smallest of the single-aisle A320-family and currently has 127 orders from several airlines and operators, including British Airways, Air France, TWA, America West Airlines, Air China, ILFC, Egyptair, Frontier Airlines and GATX/Flightlease. See www.airbus.com.

The German Federal Border Guard’s new Eurocopter EC 135 and EC 155 helicopters will be equipped with the Hellas (helicopter laser radar) obstacle warning system, developed by the European Aeronautic Defence and Space Co. (EADS). The Hellas system has now been flight-tested on an EC 135.

In January 1999, EADS won a contract to deliver 25 Hellas systems for the new Border Guard helicopters. Eyeing the international market, EADS is flight testing a Hellas system on a Bell 206, at the Canadian Defence Research Establishment, Valcartier, Quebec. To achieve production standard, the warning system already has been tested on the CH-53, UH-1D, BK-117 and EC-145.

TechniFlite of America has implemented FlightViz data visualization software as a main component of its simulator training debrief process.

ASI, based at Vandenberg Airport, near Tampa, Fla., will begin work on the aircraft in the February to March timeframe; both platforms should be completed within a year, according to ASI President Mike Dean.

ASI is little more than a year old; it received its FAA repair station certificate early this year. Through teaming arrangements with various technical firms, ASI is positioned to tackle a wide range of systems installations and aircraft completions. However, Dean has combined his own experience in special-missions aircraft with that of seven other staff members to specialize in projects such as the radar installation for Canadian Aero Technic.

ASI also has been contracted by EJM Aerospace of Crestview, Fla., to outfit the Bombardier Global Express with a BAE Systems Visual Guidance System (head-up display). That installation, says Dean, is scheduled for completion by this spring. See www.aerointegration.com.

Airshow Inc. and AirCell Inc. have formed a strategic alliance to develop a family of bundled connectivity and content products for the general aviation (GA) and commercial airline markets. As part of the agreement, Airshow will make an undisclosed equity investment in AirCell.

The companies’ technology and service initiatives will integrate communications hardware currently being produced by both companies with AirCell’s connectivity to the existing ground-based cellular telephone infrastructure and Airshow’s in-flight content offerings, which include the AirshowM@il e-mail system and the Airshow Network. The alliance will provide customers with a single, bundled solution: hardware, connectivity and content.

Virgin Atlantic aircraft now offer a wider selection of on-board Nintendo games. The carrier pioneered the provision of Nintendo games for passengers and will be the first European Airline to offer 25-hit Nintendo SNES games on one aircraft. See www.virgin-atlantic.com.

Jamaica also has jurisdiction over considerable oceanic airspace. Therefore, a further remote site will be located on Grand Cayman Island, to extend communications across the Caribbean Sea.

The PAE package will include VHF digital multimode radios; T6T 50W transmitters, and T6R receivers; prewired cabinets containing the radios; filter/multicoupler equipment; and remote site equipment (RSE2). The RSE2 accepts control and monitoring information from each of the connected radios via serial data links. It acts as a local automatic changeover in the event of equipment failure and will enable interconnection of the remote sites into a central, PAE multi-access remote control (MARC) system at some future date. The complete system is scheduled to become operational this summer. See www.parkair.co.uk.

Haneda Airport, located 6.2 miles (10 km) south of Tokyo, handles more than 300 arrivals and departures daily. See www.rannoch.com or www.airscene.com for more about the above contract.

Alcatel Space has awarded a contract to Airsys ATM to the assemble, integrate and validate the European Geostationary Navigation Overlay Service (EGNOS). A special platform has been developed to enhance the ability to test the different segments before the final integration. The contract is a major step in preparing for the operational use of EGNOS, an augmentation system for satellite navigation, by the civil aviation community.

Alcatel Space, the prime contractor for EGNOS, leads an international team responsible for developing the system’s ground segment and user segment. The team includes Airsys ATM and other components of the Thales Group (formerly Thomson-CSF). For example, Thales Avionics is developing the GPS-GLONASS receivers for EGNOS’s 38 Ranging and Integrity Monitoring Stations (RIMS-A). It also is supplying the GPS-GLONASS receivers for the Navigation Local EGNOS Stations (NLES), which control information sent to three Inmarsat geo-stationary satellites, as well as the "control loop," which slaves the geo satellites’ time reference to the ground reference clock. For more information, see www.airsysatm.com or www.thalesgroup.com.

Thomson Racal Defence has received repeat orders, worth some ï¿½20 million ($29 million), to supply the Sri Lanka armed forces with the Cougar radio system. Under the current orders, the company is supplying the country’s army, navy, air force and VIP protection unit with equipment including base/link stations, repeaters and manpacks, as well as vehicular radios. Sri Lanka has become the largest export customer for the Cougar, having used the secure communications system over many years to achieve interoperability among its forces. See www.defence.thomson-csf-racal.com. 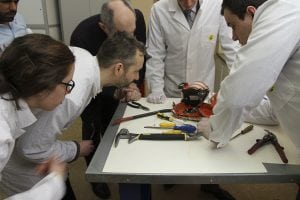