Knowing where a plane or helicopter really is has considerable value to ground-based personnel. We are all used to positive flight control via radar for the purpose of traffic routing and collision avoidance, but many other situations and "following" relationships also exist.

From a safety viewpoint–especially with offshore, remote or arctic operations–dispatch offices want to know the location and progress of aircraft in case of problems or flight delays. From an efficiency perspective, charter and airline operators can better utilize their aircraft and control the billing of flight hours. In emergency situations, law-enforcement and fire-suppression personnel can rapidly deploy the closest and correct assets, and those in charge of ground operations can gain better situational awareness.

As soon as GPS appeared on the scene, the "true position" of aircraft became inexpensively available. This prompted many people to come up with ways to get that data not only to the pilot, but also to others outside the aircraft, so the aircraft’s whereabouts are known by everyone concerned. Many secondary users of these aircraft, such as oil and gas exploration and drilling crews, have driven this requirement. They want to be certain they can recover their crews in accident cases. For them, it has been largely a passenger safety issue that has driven flight following, especially since the locations and conditions of their operations often are hazardous.

Outside of the aviation world, location and control of freight trucks, police cars, forestry vehicles, fire trucks, high-end vehicles and containers also has prompted a range of requests for positive tracking to control everything from theft and unauthorized use to improved parcel pick up, rapid emergency response, and rescue.

A wide variety of solutions have materialized for "vehicle following" both on land and in the air. Most involve some type of dedicated local radio network with data capability in conjunction with GPS receivers. The system then somehow transfers this data to a dedicated processor that maps and tracks the vehicles in question.

As mapping technology has improved (and more areas have inexpensive and available digital maps), vehicle following has become easier to do on a larger scale and now makes worldwide following feasible at high levels of location definition.

Unfortunately, all of these applications and systems have very different priorities and requirements. They operate largely in isolation with no connectivity or mutual assistance other than the coincidental use of GPS.

To provide worldwide coverage, it became clear early on that no land-based strategy could ever work economically, any more than cell phones could be practical in remote areas. This drove the demand for satellite-based data communication to provide the return link for position data. Since the entire system already depends on satellite downlink data for position fixing, this return link seemed like a reasonable solution–at first.

Communication with distant geostationary satellites is no easy task, however, as people attempting to use it for other forms of communication have discovered. It requires agile antennas and complex radio systems, and it has a very high connect time charge.

These technical problems and the cost of satellite connectivity almost spelled the end of an otherwise great idea. But it was rescued from an untimely death by an unexpected development: Instead of distant, fixed satellites, close-proximity, inexpensive low Earth orbit (LEO) satellites in a moving constellation were proposed to solve the connectivity problem.

Various groups have deployed LEOs, and one provider,Orbcomm (www.orbcomm.com), has dedicated data LEO satellites that can be hit with nothing more complex than a VHF transceiver (137-138 MHz and 400 MHz downlink and 148-150 MHz uplink) and a modest whip antenna. The company’s moving constellation of 35 satellites solves a problem existing with geometry satellites, in which some locations are occluded by mountains and other obstructions. The Orbcomm constellation is being steadily upgraded to decrease message latency, and improve geographic coverage.

I tested this two-way link quality. I was amazed at the link integrity under bad conditions and the speed of message delivery right to my desktop. This is impressive technology. If I had not seen it work in our own labs, I frankly would not have believed it.

Coupled with "gateway" uplink/downlink base stations worldwide, this integrated network receives data from the overhead constellation and does something that is quite remarkable: It takes the data from any aircraft unit and routes it via the gateway sites to any computer anywhere in the world, using the internet and TCP/IP packet technology as the connection backbone.

Because it is a digital network, rather than a voice network, it is based on packet protocols. It simply sends the packet to the system and desired IP address–essentially, like an e-mail message. The magic of this becomes much more compelling if you operate with worldwide assets and need to manage crews and aircraft in that awkwardly large space.

One firm, DataTrac Systems (www.datatrac.ca) has taken the Orbcomm concept and created a DO-160D compliant version of the satellite communicator that allows safe aircraft installation and turnkey end-to-end following and messaging functions. The DataTrac system not only provides basic flight-following and map integration, but also full two-way e-mail messaging and on-board "electronic forms" that allow instant billing, dispatch and service communication for charter and emergency services. This allows flight crews to remain in secure communication with their dispatch and service offices 24-hours a day and over much wider geographic coverage areas than have ever been possible with techniques like ACARS or dedicated company radio channels on VHF or HF.

The DataTrac OSAT-100 also provides a solution for the latency window effect (message transmission delay of up to 10-minutes caused by moving satellites in poor geometry situations), often afflicting helicopters working in bad terrain and very remote locations. It has an internal power system and recharger to complete its work even after aircraft shutdown, to insure positive transmission of the last stationary position and delivery of all messages. The Skytrac software suite from DataTrac integrates the aircraft into a complete mapping, messaging, database and e-mail system, to allow easy integration with most corporate networks and requirements.

Another firm, EchoFlight (www. echoflight.com), employs Orbcomm technology to bring updated weather data to an integrated GPS navigation system, called the StratoCheetah Mk III, by using NexRAD and METAR data (collected by the National Weather Service and routed to DTN/Kavouras). EchoFlight receives and processes in-flight user requests generated by current navigation requirements. The data is uploaded and generally displayed within one to two minutes within the continental United States. This allows people who cannot afford on-board weather radar to have that "virtual" capability in their aircraft with a small update latency. Secondary message and e-mail services also are possible via this system, in addition to weather data–quite a leap forward for the small aircraft and private pilot.

Interestingly, long-time aviation message services provider ARINC (www.arinc.com) is also an Orbcomm affiliate, but uses the technology mainly for its land-based Dominium service, for tracking trucks and trailers. ARINC also uses Comsat Corp., the U.S. representative to Intelsat (International Telecommunication Satellite Organization), for voice and data messaging services to airlines and base stations, and provides connectivity to many types of internal data systems.

All satellite-based services have high cost components and are always caught in the "chicken-and-egg" dance of who will commit and adopt their services first, so they can achieve economical service delivery. Nevertheless, this LEO satellite digital messaging technology clearly has considerable value to the aviation industry. From what I have seen and tested so far, we are just seeing what may become a huge change in how some communication and tracking functions are done with aircraft, once internet connectivity becomes a reality to the cockpit.

It may not let you bid on that e-Bay item or play Internet Doom right now, but flight-following using LEO satellite communication may get you out of some bad situations and to the right place when it really counts, which seems very worthwhile to me.

Walter Shawlee 2 welcomes reader comments and may be contacted by e-mail at walter2@sphere.bc.ca 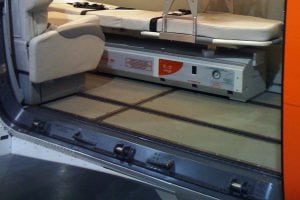